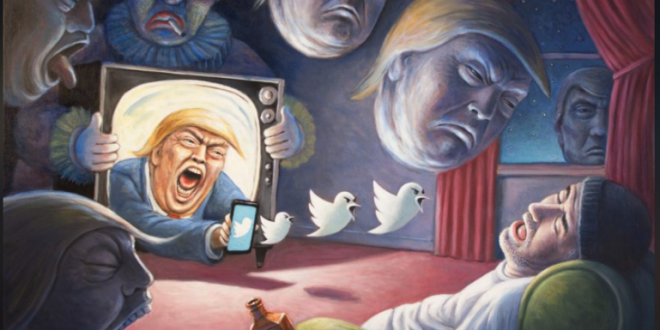 I woke up predawn yesterday and had a vision I thought was a spontaneous imagining of a gruesome political cartoon. I’d like to call it a psychopompic vision, but it didn’t occur immediately upon awakening but a few minutes later while stumbling toward the bathroom.  A queasy image of a dog being neutered by veterinarian surgeons flickering in my mind.

I’d been horrified, like any sane American, at the domestic terrorist attack on the Capitol. It was an archetypal moment. I’d been talking to everyone about the collective psychosis erupting from both the right and the left. Q is the most vile manifestation of it. A retread of the blood libel against the Jews. Most political conspiracy theories—by which I mean those that don’t identify actual conspiracies—which are abundant of course—but the fever dreams erupting from the collective unconscious—are anti-Semitic. See my podcast/youtube, Problems with the Conspiratist World View, There’s always Jewish boogeymen such as the Rothchilds or George Soros.

Q is a retread of the centuries-old “blood libel” against the Jews. For at least eight hundred years Jews have been accused of drinking the blood of Christian children.

A common belief was that Jews needed the blood of Christian children to bake matzah for Passover. Since collective psychosis castrates reality testing, none of the demented Christians who believed the blood libel noticed Passover began millennia before any Christian children existed. Christ, an outspoken Jewish rabbi, was celebrating Passover when he was rounded up by Roman centurions for crucifixion. The Last Supper was a Passover Seder as was depicted in Christian art throughout the ages. There were no Christian children to provide blood for the Matzah, because Christianity hadn’t been invented yet. Christ and all the disciples were Jews. But that didn’t discourage the blood libel conspiracy from believing that the blood of Christian children was needed to make matzah because facts don’t matter. Similarly, Qanon was born out of Pizzagate, an obvious retread of the blood libel, where children were supposedly harvested in a new bakery scenario. Allegedly they were  processed by elite pedophiles in the basement of the Comet Ping Pong Pizzareia in Washington DC. Pizza is the new matzah. See this Guardian article explaining Q as an Anti-Semitic conspiracy theory.

On December 4, 2016, Edgar Maddison Welch arrived at Comet Ping Pong to rescue children from the alleged basement pedophilic processing facility. He fired three shots from his AR-15. But then he ran into something that conspiratists living in their own social media bubbles can easily avoid. A concrete fact. Comet Ping Pong has no basement.

But facts don’t matter if you are part of a collective psychosis. The blood libel can switch from matzah to pizza, and the historical continuity won’t even be noticed. Q has made numerous disconfirmed predictions, such as the Nov. 1st, 2017 prophecy that 25,000 indictments of elite democrats were only a few days away. Failed prophecies don’t stop cults. That’s not how collective psychosis works.

“You’ll develop, you’ll develop herd, like a herd mentality,” said Trump at a town hall in Pennsylvania . “It’s going to be, it’s going to be herd-developed, and that’s going to happen. That will all happen.” Trump was trying to spread dangerous misinformation about covid, but may actually have given his most prophetic statement about his presidency. Qannon’s motto is, “Where we go one, we go all.” That’s the single line source code for a herd. “Herd mentality” is another way of saying “collective psychosis.”

Q and Trumpism are examples of collective psychosis, but so is Wokism on the left. See my article, Hey Woke Folk, You May Not be as Woke as You Think.  I have a close friend with a university degree in evolutionary biology who sports long dreadlocks and works in the CBD industry. I just learned that he has fallen into the Q hole. This is part of what makes Q so dangerous. It can cross the railroad tracks from right to left.

I’m particularly wary of collective psychosis because three out of my four grandparents fled Ukraine and Latvia due to anti-Semitic conspiracy theories including the blood libel.

Video of the scruffy rabble of domestic terrorists overrunning the capitol are an archetypal vision of collective psychosis. 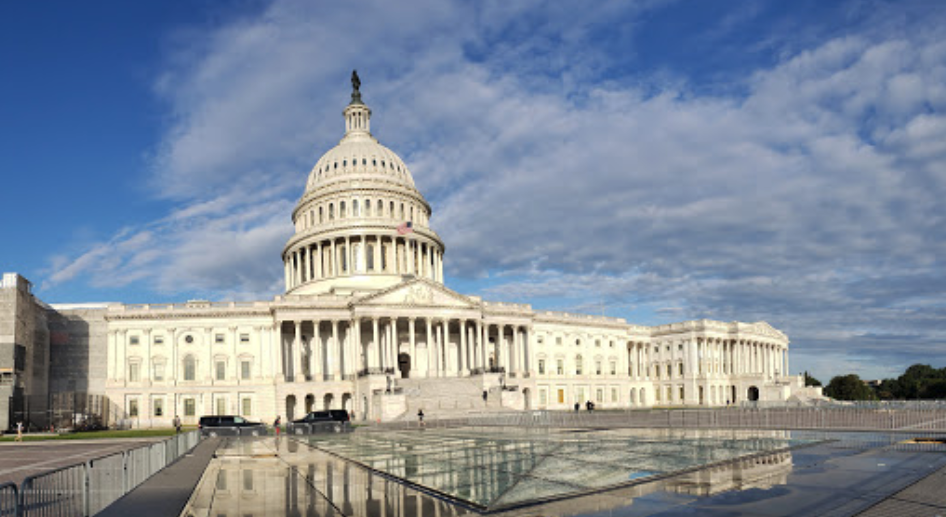 Behold the Apollonian, Neo-Classical majesty of the Capitol Building. Its archetypal sacred architecture conveys Age of Enlightenment values such as rationality and justice. And now behold the mob possessed by a collective psychosis promoted by Trump. Notice the man wearing the “Camp Auschwitz” hoodie. 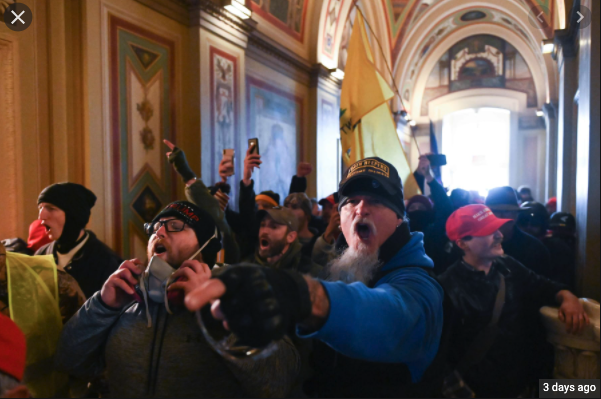 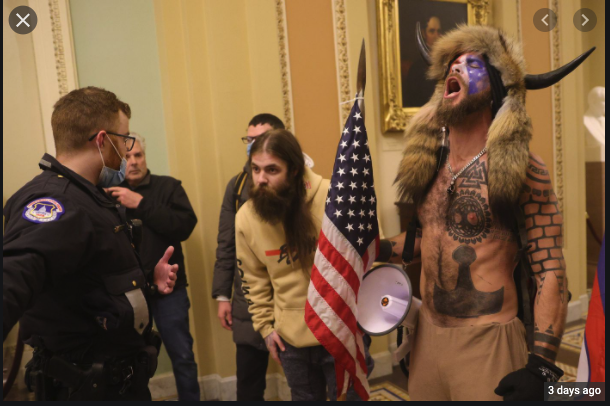 On the morning of January 8, while thinking about the failure of Trump’s attempted insurrection, I had a vision of veterinarians neutering a dog. Its insides were exposed, and they were removing some little anatomical part. I assumed it was my imagination spinning up a gruesome political cartoon version of Trump’s political castration. A few hours later, the world learned of  Trump’s detwittering, his twitterectomie. Twitter, the tool he’s used to ejaculate spurts of his poisonous psychosis into the collective psyche more than 26,000 times. The tool he used every morning sitting on his golden throne yanked out of his little hands.

As satisfying as it was to learn of Trump’s twitterectomie and some of the great election news we’ve had recently, it doesn’t begin to quell my unease about the state of the collective unconscious. Trump’s bloodless Twitter castration was necessary, rational, prudent, etc. but it won’t stem the “animal spirits” erupting from the collective unconscious. It will easily be converted into more enraged victim consciousness like Hitler’s “stab in the back” lie about why the Germans lost WWI.

As a  historian of fascism wrote in the New York Times today: “Like historical fascist leaders, Trump has presented himself as the single source of truth. His use of the term “fake news” echoed the Nazi smear Lügenpresse (“lying press”); like the Nazis, he referred to reporters as “enemies of the people.”

People on both the left and right love to diss the mainstream media as “nothing but lies.”  Both sides feel they are a cut above the sheeple who read legit news sources and want to “wake them up” to their alternate,  counterfactual realities. One psychic scarecrow gets detwittered but zombieism is contagious. There are obvious reasons why zombie apocalypse haunts the collective imagination. People you would never expect can get bitten and join the zombie horde. And if there’s one thought still rattling around in hollowed-out zombie heads it’s: “Where we go one, we go all.” The nightmare continues. As James Joyce wrote early into the twentieth century, “History is the nightmare from which I am trying to awaken.”

Collective psychosis is the nightmare plague of the human species, and it generates new variants constantly. (see the new Frontline documentary,  A Thousands Cuts, to see the parallel version playing out in the Phillipines ) Read volume ten of Jung’s collected works, Civilization in Transition. As Jung said, “There is no hydrogen bomb in nature, that is all man’s doing. We are the great danger. Psyche is the great danger.”

See Part Two of the Fall of the Orange Goblin Chronicles:

Insurrection at the Capitol and the Empire of Dirt