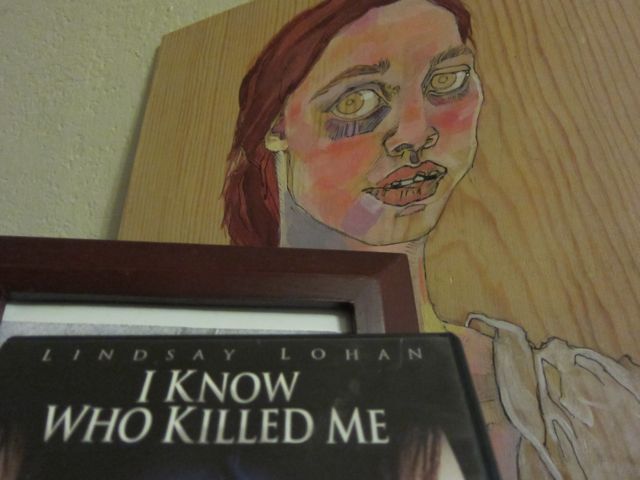 Quick book update: Close to a final draft, but still debating mainstream publication vs. Amazon Create Space. Open to anyone who has advice on the subject.

“…the human soul is divided against itself, as much, perhaps, in love with death as with life. Against all claims of reason, self-interest and morality stands the insidious lure of the death-instinct. Above and beyond politics and ideology, steeped in the hidden byways of our civilized way of life, is something else with which we have to reckon: the thanatos conspiracy. ” – — Michael Grosso, Philosopher, from his book The Final Choice

This card is inspired by a dream I had earlier this morning. In the dream a person I know in the waking life, a person known to have many dark, neurotic qualities, is berating someone and attacking their sense of self-worth. I am in an upper story of the house where this is happening and I am filled with a desire to tell certain people about the sadistic behavior of this neurotic person. The urgency awakens me, but as my waking personality and awareness kick in I realize, in a figure-ground reversal , that the dream is not a revelation of the darkness of this neurotic person I know, but of my inner adversary. The dream also relates to an intense discussion I had with a spiritual ally just before I went to sleep. We discussed some new disciplines that are clearly developmental practices for me. We also discussed the inner resistance they aroused that wanted to sabotage the practices. 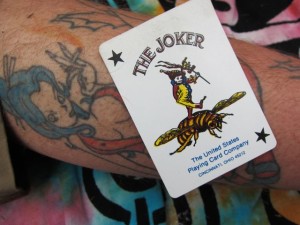 Realizing I needed to probe into my inner adversary, I went to that Ouija Board of the externalized psyche, Google, and typed in “inner adversary.” An article was returned that had the exact title “Inner Adversary.” The article was also written from the perspective of my Jewish ancestry and directly addressed what was going on with my inner conflict and my efforts to elevate myself with the new practices and an anti-life force in me opposing those efforts. The article felt like a divine message from my ancestors, an instance of Google working as an oracle. To further its work I am going to include the entire article and follow it with some commentary. I believe it will be as relevant to your relationship with your inner adversary as it was with mine.

Embedded within each of us is a spiritual challenge system.

Even if you know what is good, right and desirable, it isn’t so simple just to act that way. No sooner does an inclination to do something good come into your mind or heart than up pops an objection. It might be a contrary thought, or a feeling, or a desire pulling you in the opposite direction.

The Jewish sages give a name to this negative impulse. They call it the yetzer hara, the inclination to evil. We all have that inclination and it challenges us, which is the purpose for which it exists. We are born with free will and can choose to do good or bad, but whenever we try to do something that stretches us in the direction of good we need to expect to encounter this inner resistance arising from the shadows. We have an inner inclination to elevate and purify ourselves — that’s the yetzer hatov, the impulse to do good — and what stands in our way is the in-built adversary, the yetzer hara.

Rabbi Eliyahu Dessler has given us a very helpful concept to help us understand this give and take, push and pull we experience whenever we try to do something that reflects our ambition to elevate ourselves. He identifies what he calls the bechira-points in each of us. The word “bechira” means “choice” in Hebrew, and refers to our free will. There is, Rabbi Dessler says, an inner battle-line that is drawn right at those places where choice is very alive for you, where you really could go either way with a decision. He illustrates what he means by referring to a real battle:

When two armies are locked in battle, fighting takes place only at the battlefront. Territory behind the lines of one army is under that army’s control and little or no resistance need be expected there. A similar situation prevails in respect of territory behind the lines of the other army. If one side gains a victory at the front and pushes the enemy back, the position of the battlefront will have changed. In fact, therefore, fighting takes place only at one location.

With our inner struggle, the battle takes place only at one point.

This image describes the situation we ourselves regularly face whenever we try to do anythingthat involves an exercise of choice. If it is an easy choice where your values and appetites are well-established, you don’t experience any struggle at all. Nor is it any harder when the choice is so far outside your interests or potential; then you aren’t even tempted. Rabbi Dessler zeroes in: “Free will is exercised and a valid choice made only on the borderline between the forces of good and the forces of evil within that person.”

To illustrate, he gives the example of two people who are very confirmed in their relationship to material goods. One is a professional thief raised among thieves and robbers. This person has absolutely no inner struggle over whether or not to steal because that’s his established way of life: “For him, whether or not to steal does not present any bechira at all,” says Rabbi Dessler. But still, this person retains the potential to ascend spiritually, and so somewhere within him free will is alive and choices are real. Rabbi Dessler wonders, if this thief were to be discovered in the midst of a robbery, would he shoot his way out of the jam and run the risk of killing someone? If that question would be a real struggle for him, and the outcome uncertain, then this would define one of his bechira-points “where for him the forces of good and evil, truth and untruth, are evenly balanced.”

The other person Rabbi Dessler cites is someone brought up in a good home with strong moral values. This person would have not the slightest temptation to steal a penny. Does that mean that he or she has no bechira-point where the tests of spiritual ascent are going to be faced? No, this person must have challenges too, through which they can elevate spiritually. While theft is not a real possibility here, in this case the bechira-point might refer to another aspect of relationship to property, like how much charity he or she gives, and whether giving is done generously, and with a pleasant demeanor.

Rungs on the Ladder

Rabbi Dessler concludes his discussion by advising us that this bechira-point does not remain static:

With each good choice successfully carried out, the person rises higher in spiritual level; that is, things that were previously in the line of battle are now in the area controlled by the yetzer hatov and actions done in that area can be undertaken without struggle and without bechira. And so in the other direction. Giving in to the yetzer hara pushes back the frontier of the good, and an act which previously cost one a struggle with one’s conscience will now be done without bechira at all.

Think of those choices that often confront you where you really do experience the possibility of going either way. Do you waver over the second piece of dessert? Is reaching into your purse or wallet a struggle with an uncertain outcome? Do you know you should call or visit a sick friend, and yet you hesitate and vacillate over actually doing it? Do you look at the sink full of dishes and lean this way and that way and back again and go all around over whether the responsibility is yours?

These points represent the greatest potential to ascend spiritually.

You may see yourself reflected in some of these examples, or you may be able to name your own. Wherever your bechira-points may be, rest assured that you have them. They represent not only places of uncertainty in your behavior, but they are also the openings where you have the greatest potential to ascend spiritually. It is important to recognize that each choice you make can be a rung on the ladder of your spiritual ascent (or, unfortunately, the opposite).

Just as your spiritual curriculum and set of bechira-points are distinctive to you, so does your inner adversary, your yetzer hara, come at you with challenges that are uniquely tailored just to you. You’re only going to be tempted or pushed in regard to traits and choices that are personally challenging for you. Perhaps you know you should be more patient with your spouse or children and you want to be, but as soon as you set that resolution, whose inner voice is it that points out to you how outrageous it is that they are so slow or late? You want to open your hand in charity, but as soon as you make the first move to reach into your pocket, where does the thought originate that wonders whether you will have enough for yourself. You decide to lose a few pounds, so who is it who tells you that having only one more won’t matter?


Consider this a propitious time to locate your bechira point or points. Usually there are points so I think it is more appropriate to talk about a bechira line or boundary. Define, as precisely as possible, what actions, practices, doings or non-doings, are necessary and possible for your next level of development. Once you define these, and resolve to follow through, you have drawn a bechira line in the dust between you and your inner adversary. You need to make the inner adversary an ally by accepting it as your goad, as your spiritual challenger. Consider it a worthy opponent. Recognize its trickery and resistance to growth and use its presence as a catalyst toward vigilance and impeccability. The inner adversary overlaps with the shadow and it may even contain positive aspects of yourself that have pathologized. It too may grow when you refuse to relinquish responsibility for yourself and your actions. Now is the time to define and defend your bechira line.

For more on the shadow see the card: Shadow Fragmentation
The Inner Adversary is the intrapsychic version of the Threshold Guardian see the card: Threshold Gaurdian
Finally, Taking on the Sacred Regimen is a card that suggests one of the most classic ways of defending the bechira line