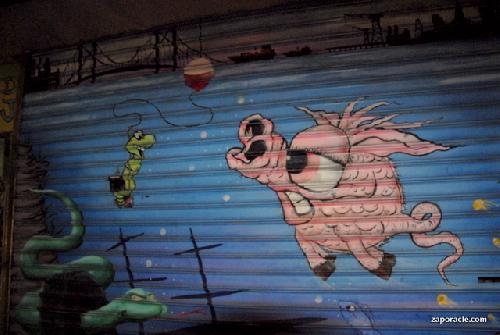 Zap Trap By the Culture MCs

This rap song dates back to the dawn of hip-hop and was written approximately 1982-3. At the time I was the building security coordinator and dean of Samuel Gompers Vocational Technical High School in the South Bronx. Many early hip hop artists and graffiti writers came from Gompers. For example, the first scratching was done at Gompers by the pioneer DJ Grandmaster Flash who modified a turntable for that purpose in an electronics shop class. I was the youngest and fittest of the three deans and spent most of the day patrolling the hallways. To see what I was like then watch the UFOEye Knight Video where you can see me wearing the exact outfit I wore to school everyday (black combat jacket, Batman shirt—this was before any of the movies came out and ruined my Batman fetish).For more on the world this came from see Johnny. The underlining was in the original text.

Well I was chillin’ in the hall and I was late to class,

Taking my time I had no pass.

I started snappin’ my fingers and started to rap ,

Well I thought about dipping or give him the squeeze,

But it was too late because Zap said freeze.

So I said ‘Zap you’re no security guard,’

Then he said ‘Where’s your pass and your program card?’

So I said ‘Zap just leave me alone.”

He said ‘Let’s go call mother boo on the phone.’

That’s when I said ‘Oh no’ and before he could see,

I made my escape around exit 3.

I ran up the stairs from the 1st to the 2nd,

Because I ran around the corner where he couldn’t see.

Well I thought I had him beat and at least for while,

A pretty girl came my way and she had a smile,

But before I could kick it I threw on a grin,

I turned my back and Zap caught me again.

‘That wasn’t me that you saw’ and I started to shout.

‘Zap I don’t understand is this some type of game?’

‘That girl just dissed me and you are to blame .’

‘Zap you better take it easy and don’t be a fool,

Because I’ll see you on the Six Train right after school. ’

‘Yo Zap you must be crazy you’re going too fast,

I’m not going to the office and I don’t have a pass.

So I grabbed my books and started breaking free.

And that’s when Zap put out an APB.

For the rest of the day I was on the run,

Making Zap look stupid and having some fun.

When Zap caught me again everything went well,

That’s what I called Zap trap you should take note,

If you’re trying to cut class,

He ain’t no joke.

When I’m chillin’ in Gompers I don’t like to smoke,