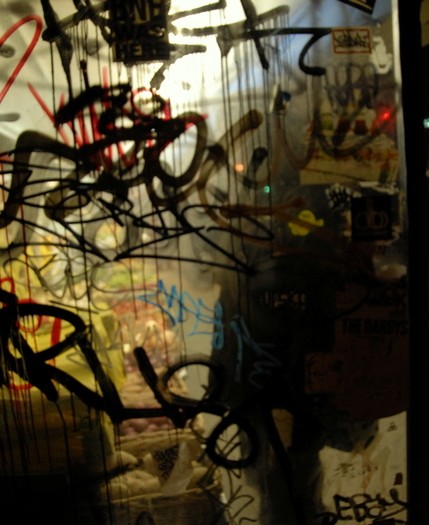 This story, a montage of flashbacks experienced by a dying inner city kid, was written in the Eighties when I knew a lot about that subject as I was teaching in the South Bronx. This was Samuel Gompers Vocational-Technical High School which was about two blocks from where Jimmy Carter gave his famous speech on urban blight. The school was ringed by abandoned, burnt-out apartment buildings and the neighborhood was a post-apocalyptic wasteland. I was the building security coordinator and hallway dean patrolling with a walkie-talkie, breaking up fights, etc. The “Culture MCs” wrote and performed a rap song about my hallway patrol entitled “The Zap Trap.” The South Bronx of this era, and especially Gompers, was ground zero for the hip-hop explosion. Grand Master Flash came from Gompers and learned how to rewire turntables and invented scratching while hanging out in the electrical shop. I was especially close to some of the more talented graffiti writers. I knew Keith Haring and the Fun Gallery was right across the street from where I lived in the East Village so I was able to help some of the young graffiti writers (they called themselves “writers”) get their work shown. To see what I was like then watch the UFOEye Knight Video where you can see me wearing the exact outfit I wore to school everyday (black combat jacket, Batman shirt—this was before any of the movies came out and ruined my Batman fetish). This story was published in Long Shot (http://www.longshot.org/), a literary journal edited by my friend and fellow teacher in the South Bronx, Danny Shot. Allen Ginsberg, who lived a block away in the East Village was a contributor, he has a poem, “On the Conduct of the World Seeking Beauty Against Government” in the very issue that “Johnny” was in—Volume 6. This all sounds very colorful now, but this whole era was much darker than that, crack, gunfire, misogynistic culture of violence, etc., etc. and this story reflects that.

He caught up with Rayski under the Texaco sign. They were breathing hard and the gasoline smelled sweet. Rayski slapped his open palm. “Good looking out Johnny.” Johnny pulled a blue plastic comb out of his back pocket. Rayski wiped blood off his Nike high tops with a sheet of newspaper. He thought about what he could buy with that kind of money.

“I’m gonna get me one of those fresh leather jackets and some Filas. That shit look deft.” Johnny looked down at the iridescent gasoline patterns on the asphalt.

“Yo, leave me a couple of cigs before you break out.”

“Light it up Johnny.”

Images flashed through Johnny’s mind, electric, salty to the taste. He could feel the heat of the man’s eyes on his skin. He felt for the 007 knife in his back pocket.

“Shut up before we shut you up.”

“Let me get a drag off that refer, homeboy.”

“That boy has the crazy fresh box…everybody be movin’ to the tuff beats…electric meat puppets dancin’ to a hip-hop beat.”

Destructive Force Crew in red and black spray paint appeared on the Six Train across the platform.

“That look deft, I never seen that siht before.”

The man was still staring at Johnny.

“Yo, you’re gonna have to give up that reefer homeboy.”

“I ain’t gotta do nothing but die, nigger.”

“Yo, you better watch your back Dee, you get that boy mad and he gonna put your lights out, he gonna pop your brains all over the street.”

“That boy ain’t gonna do shit.”

Johnny looked at the man from behind his sun glasses.

“Yeah spark it up Johnny. That’s that good shit that freak Tanya gave me. That girl won’t get off my dick. She’ll give me anything.”

It was raining and neon rainbows reflected off the wet asphalt. Johnny put an M-80 in a soda can, but it didn’t go off.

They ran across the rooftops, dodging television antennas, broken glass sparkling around them. Sinbad made it to the fire escape first, it was a ten foot drop from the last rung. Johnny ran to the alley but it was blocked by piles of wet garbage. Sinbad was gone and they were gaining on him. He climbed into the alley and hid under a mattress that smelled of urine.

The light turned red and Johnny felt the man’s hand on his throat.

“It won’t hurt as much as you think.”

“Where you takin’ me?” They wrapped duct tape around the smooth skin of his wrists.

“Relax, homeboy, this ain’t like the needles you be gettin’ at the doctor’s.” He felt the vinyl of the car seat on the bare skin of his back. He didn’t like people laughing at him.

Their faces looked yellowish under the sodium vapor street lights.

“…c’mon homeboy, I just want to check you out.”

There were only the two of them in the elevator. He could feel the blood pulsing in his throat. The man looked into Johnny’s dark eyes. Johnny looked at the yellow pills in the man’s hand. He didn’t say a word.

“Don’t run your mouth boy, unless you want something in it.” Johnny felt the sweat on his spine. “You thought you were gonna get over on us, didn’t you homeboy?”

“Yo, step back motherfucker.”

“We gonna have to throw some joints homeslice.”

Johnny dodged left but not fast enough…he wanted to get home and wash off the blood.

“What? Don’t back down now boy…that’s it, I always knew I had it in you.” Johnny saw him grinning in the shadows.

“I’ll catch you on the rebound Johnny.”

He swung wildly, missing. The head of the switch pipe thudded into his back, slamming him onto the pavement. Johnny squirmed as they held his arms down. He swallowed it…things were losing focus.

Lights and faces spun in a dark red blur.