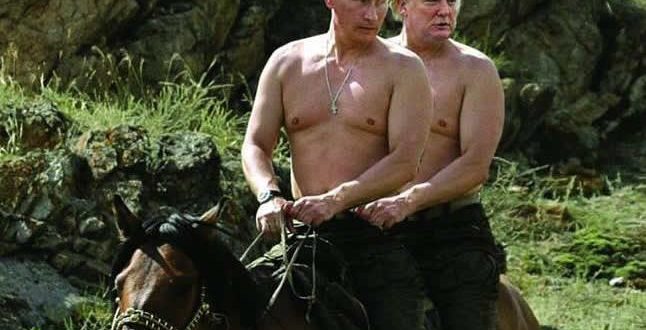 Twin Horsemen of the Trumpocalypse

cover image by the Daily Squat

Many years ago, when Putin first came to power I had a nightmare about him. Worse than a merely scary nightmare it was tragically poignant. I was feeling the devastation of specific victims of his murderous cruelty. My grandparents came to the USA to escape anti-Semitic persecution from this part of the world so perhaps some ancestral anxiety was being stirred up. My blood ran cold the very first time I laid eyes on an image of Putin. Even his name sounds horrifying. Hit-ler, Put-in (as in to prove his masculinity he put it in her). The last name also conjures the Yiddish word, “Putz.” Putin seems like a psychopath whose fear of inferiority has become a sadistic will to power. Jung had a name synchronicity theory. Putin is a Putz, an inferiority determined to become a vampiric Vladimir/Vlad the Impaler. The other is Donald the Clown born under the devil’s lucky star to trump, to pull off unlikely, and disastrous wins with the help of stacked decks.  And those decks were stacked by bailouts from his dad, banks, bankruptcies, tax loopholes and now free hacking by his devil-daddy, Vladimir Putin.

Trump never made my blood run cold, but he has been turning my stomach since the early eighties. Living in NYC, Trump was the dominant personification of greedy, inflated egoism in NYC before he became a fully national figure.

Now two faces of the will-to-power complex seem to have converged.  Behold the Janus-headed chimera of evil, the clown snake, Trumputin.

Based on his most recent and longest-ever press conference, even no-drama Obama seems to finally be losing his cool about the imminent danger of the two horsemen of the Trumpocalypse. Trump’s “anti-cabinet,” a rogue’s gallery of low-budget Batman villains who are committed to destroying the agencies they are being put in charge of, is putting hideous faces on the disastrous consequences of this election.  Add to that the election result being openly celebrated by Putin and Russian thugs who successfully put their bloody fingers on the scale. The same folks who have just made Aleppo a synonym for hell. Add the polling that shows that 37% of republicans now have a favorable view of Putin, a result that is as horrifying and absurd as polling that shows a spike in cancer’s favorability rating. When you add those things together you have a blood pudding of gross stupidity and evil. You have a putrid, but potent, witch’s brew of the most dangerous and inferior of human qualities waiting to manifest the nightmares lurking in the collective unconscious.

But we are not powerless. When the people in the Department of Energy took the Trump campaign’s witch-hunting, 72-question questionnaire designed to expose anyone who takes climate change seriously and threw it back in the bully’s face, the bully backed down and disavowed the questionnaire, absurdly claiming it was never “authorized.” When Obama confronted Putin face-to-face at a summit in September and told him to cut out the election hacking, he backed down. All that’s necessary for the triumph of evil is for people who don’t see greyscale, the pure folk who keep saying “republicrat,” and who couldn’t see a difference between Gore and W, and an order-of-magnitude difference between the poison warning labels  attached to Clinton and Trump to continue to be stupidly indifferent and uncompromising, and for people who do see the difference to become paralyzed by the horror, the horror, and not stand up to the twin horsemen of the Trumpocalypse.

History is the nightmare from which we must work our asses off to wake up from.

See also Dispatch from the Trumpocalypse.  Go here to see many more articles on the 2016 election by Jonathan Zap.  For more writing and podcasts by Jonathan Zap or to interact with his free 664-card oracle go to zaporacle.com.