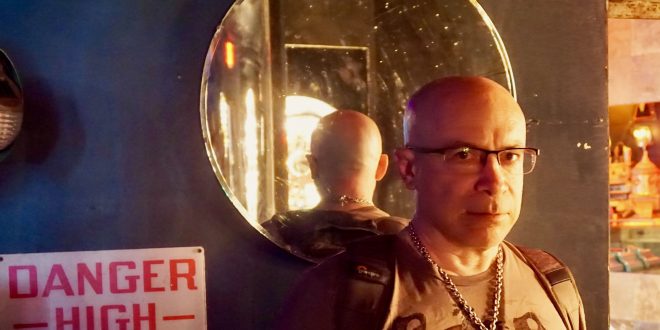 Cover Image—the author looking into the high voltage shadow mirrors of the American psyche  —photo by Andrew Warren Anderson
When people would ask Jung how Hitler (whom Jung met) “hypnotized” the German psyche, Jung responded, “Hitler didn’t hypnotize the German psyche, he was the German psyche.” This is what is so embarrassing about Trump, he is a large part of the American psyche—belligerently anti-intellectual, anti-fact, pseudo-macho, claiming to be a victim while a member of privileged groups, scapegoating, ego-inflated, tuned into high school sex and power games—who’s hot, who’s not—who’s got the highest ratings—winning as an end in itself, unable to own his own shadow, desperately in need of “narcissistic supply” to bolster an inflated and fragile ego identity, a never-apologizing, take-no-prisioners, all-confident, in-your-face bullshit artist bluster, a classically American super-salesman style of inferior masculinity confused with actual strength, competence and leadership that could deliver on classic American can-do optimism.
Donald Trump is the personification of angry-white-guy AM talk show rants, Cool Ranch Doritos, Big-Gulp-sized Mountain Dew, pharmaceutical ads that promise salvation to a feel-good soundtrack with the ignored fact-litany of fatal side effects playing in the background. It is the American psyche, or at least a substantial enough minority to have an electoral college win, that decided to swallow the big orange sugary poison pill it was sure would cure real ills while delivering only on the ignored side-effects. It is psyche that is the real third-rail of politics, the underground, high-voltage labyrinth that sends such rude beasts slouching toward electoral college wins and consequences that can range from sugar-coma hangover and Cool-Ranch-Dorito breath to fatal side effects. But the American psyche is not just all killer-clown shadows, there are other layers–such as puritanical, fact-rigorous superegos attached to the rule of law, and the protocols of the deep state.
With the appointment of former FBI director Mueller as special counsel, the acting-out American high school bully American sub-personality is about to get called to the principal’s office, and confrontation with the reality that the American psyche is complex and that he is not the only sub-personality capable of dominance.
Post Views: 1,159