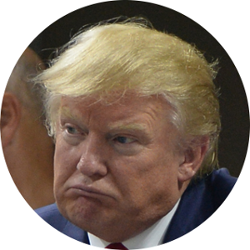 Trump shows clear signs of cognitive decline. There are many ways to view what’s going on with the Trumpocalypse, but one that has a great deal of corroborating evidence is that Trump is suffering from a form of moderate cognitive impairment that is almost to be expected in a 71-year-old man with his extremely unhealthy lifestyle.

Many people have observed the dramatic decline in his vocabulary, attention span and ability to organize his thoughts when he speaks. (<<<follow link to an excellent Slate article with examples of Trump’s past and present speech)  If you compare Trump’s sophisticated vocabulary and ability to speak in coherent sentences and paragraphs during interviews in the eighties to the low-vocab, stream-of-consciousness rambles of today, it’s obvious that there is a dramatic decline in his cognitive function. Whatever deal-making abilities Trump might once have possessed, the man we see today is chronically incapable of adhering to long-term strategies without sabotaging them with emotional outbursts and impulsive Tweets that are so often disastrous to his agenda, legal position, etc.  Many key neurological functions are inhibitory and in early-stage dementia people commonly lose their sense of diplomacy and both the judgment and the self-restraint to keep themselves from reacting with foolish words and other actions when they are emotionally agitated and feel a loss of control.

An upcoming book favorable to Donald Trump by Corey Lewandowski and David N. Bossie — President Trump’s former campaign manager and former deputy campaign manager — has some startling revelations about Trump’s  junk food habits. According to an article in Fox News: “The book further claims that Trump’s preferred McDonald’s order on the campaign trail was “two Big Macs, two Filet-O-Fish and a chocolate malted” — a meal that exceeds 2,400 calories, assuming the “malted” refers to a small McDonald’s chocolate shake.” The New York Times reported a couple of days ago that Trump typically consumes a dozen cans of Diet Coke daily. As a CNN article on Trump’s Diet Coke habit points out, even a one-can-a-day-diet-soda habit increases your odds of dementia 3X.  Trump is marinating his brain with massive quantities of the known neurotoxin aspartame. Given his additional risk factors—the stress he lives with, his obesity and complete lack of exercise, it would almost be surprising if he weren’t suffering from cognitive decline at his age.  Trump is our oldest president at time of inauguration, number two—Ronald Reagan—showed clear signs of cognitive decline by his second term.

A psychiatrist I heard interviewed believes that Trump has low-grade psychosis. People often think psychosis means massive hallucinations, etc., but actually it’s on a spectrum and can involve milder forms of weakened reality testing. This psychiatrist believes that in many or most cases Trump is not consciously lying to manipulate the populace but is creating alternate facts to bolster his fragile and highly-inflated ego-identity. As Trump deteriorates, he compensates with counter-factual ideation—e.g. that he has one of the greatest memories in history, that it’s not his voice on the Access Holywood tape, that he won by a “landslide,” etc.

Trump’s daily barrage of false claims may not be the spin and propagandistic manipulation many of us assumed, but products of a narcissistically disordered personality in cognitive decline desperately trying to maintain its ego self-image.

Romantic relationships and other voluntary human alliances inevitably reflect the psychological state of those who choose to partake in them. Although Trump lost the popular vote,  a substantial minority of Americans voluntarily elected to make Trump their leader.

When people asked Carl Jung, “How was Hitler able to manipulate the German psyche?” Jung replied, “Hitler didn’t manipulate the German psyche, he was the German psyche!”  I am not suggesting any equivalence between Trump and Hitler. My point is that people choose to elevate people who reflect their psyches. Although there are top-down causative factors—like Russian operators manipulating social media, the Trumpocalypse is also a bottom-up phenomenon—a collective choosing the leader who  best personifies their mass psychosis.  Similarly, a substantial demographic in Alabama chose Roy Moore to personify their shadow/mass psychosis, etc.

Jung successfully predicted that someone like Hitler would emerge based on what he saw in the collective German psyche. Many of Jung’s educated German patients during the era of the Weimar Republic were dreaming about Wotan, a Germanic god of war and mayhem. It was such a striking phenomenon that Jung called it “Wotanism.”  Jung once met Hitler and his impression was that he was shaking hands with a  “psychic scarecrow.” This seems strangely parallel to my impression of Trump as a visual self-caricature— a  scarecrow with a sagging pumpkin head erupting with straw.

Mass psychosis is a common phenomenon.  Long before the Trumpocalypse, James Joyce wrote, “History is the nightmare from which I am trying to awaken.” Trump is the personification of yet another mass psychosis.  A substantial U.S. demographic is cognitively impaired (with or without neurological issues).  Many Americans are poisoned by a diet of food-like substances and factually-deficient news-like substances. A substantial part of the population shares Trump’s wounded and resentful narcissism, racial animus, and anger at all groups demanding power that they assumed was their exclusive entitlement.

Inside of Trump is a desperately overcompensating wounded child, and given how many people have wounded children inside of them, it’s easy to see how a significant part of the part populace can identify with him. Trump’s cognitive decline, loss of sophistication with thought and speech, uncontrolled rage, etc. only enhance his ability to channel their feelings and low-info worldview. Trump is the personification of a form of consciousness that inevitably deteriorates as it is not geared toward growth and adaptation, but constriction and rigidification (Build the wall!), repression of the other (Lock her up!), and doubling down on old biases and failed strategies. It’s a form of consciousness disastrously maladaptive to a world of accelerating change because its real agenda is trying to restore a wounded ego-identity stressed out by change. “Make America great again,” really means: I’m weak, help me to feel great again.

In my first article on Trump, published two years ago, I reported on an amazing Freudian slip Trump made during a Meet the Press interview with Chuck Todd in which he said:

The defeat of Roy Moore is the latest of a series of events which even Trump has to recognize as losses. Given that his whole ego identity is built on his being the winner, the counter-punching, trump-card-holding victor triumphing over a succession of adversaries, we can expect a further destabilizing of his personality as losses pile up.

My hope is that his physical decline will cause him to become more passive. The recent New York Times article on Trump’s “battle for self-preservation”  reported an encouraging sign of this possibility. Referring to Trump’s relationship with his chief of staff, former general John Kelly, they wrote:

Despite chafing at the limits, the president actually craves the approval of Mr. Kelly . . people close to Mr. Trump said.

Trump had an authoritarian father whose approval he craved and who sent him to military schools to discipline him. As president, Trump has surrounded himself with generals. This looks like Trump, unconsciously aware of his own weakness, regressing to his childhood situation and looking for new father figures to impose the discipline he can’t manage on his own. This could be a risk-lowering development.

The worst case scenario is Trump becoming so desperate to feel great again that he overrides the trio of father-figure generals (his chief of staff, national security adviser and defense secretary) to impulsively attack his alter-ego, “Little Rocket Man.” I think the odds favor Trump acting out with impulsive tweets, but not being able to overcome the disapproval of this trinity of father figures enough to take any military action solely on his own initiative.

Still, our unsettling reality is that two Ring-of-Power-possessed and deteriorated psyches are wrestling with each other just above the Cracks of Doom. Note: Scroll through my  Reality Sandwich profile to find a couple dozen more articles on the Trumpocalypse such as:

If not Trump, You—a Dream on the Morning of the Inauguration