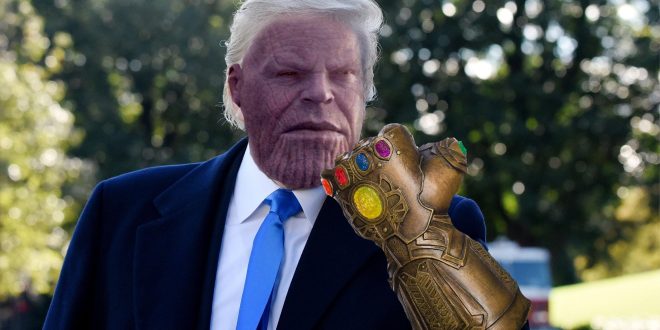 cover photo of Thanos at a recent press conference at which he claimed “total exoneration and victory” and  called for an “end to the Avenger’s phony and illegal witch hunt.”

U.S. Attorney General Bill Barr released a four-page statement
based on a review of the principal conclusions of his own earlier four-page summary of the principal conclusions of the Mueller Report and says that it proves Thanos to be “completely exonerated.”  Barr discussed the findings of his own statement at a Justice Department press conference late Friday afternoon where he pointed out,

“To the best of my recollection, the Mueller report does not even specifically mention Thanos by name.”

When asked if Thanos is mentioned in any of the redacted portions of the report, Barr was evasive and said he “couldn’t recall” and, “I’m not sure what you mean by ‘mentioned.’”

Barr said there was, “zero prosecutable evidence of collusion between Thanos or the Thanos team and Russian government agents and this is why Mueller chose not to indict Thanos.”

When challenged that Mueller would have been following a de-facto Justice Department policy of not indicting reigning Marvel Super Villains,  Barr asserted that Mueller’s decision would not have been based on that,

“The role of the federal prosecutor and the purpose of a criminal investigation are well-defined. Federal prosecutors work with grand juries to collect evidence to determine whether a crime has been committed. Once a prosecutor has exhausted his investigation into the facts of a case, he or she faces a binary choice: either to commence or to decline prosecution. To commence prosecution, the prosecutor must apply the principles of federal prosecution and conclude both that the conduct at issue constitutes a federal offense and that the admissible evidence would probably be sufficient to obtain and sustain a guilty verdict by an unbiased trier of fact. These principles govern the conduct of all prosecutions by the Department and are codified in the Justice Manual. Since Mueller did not indict Thanos, the binary outcome is, therefore, that he is completely exonerated.”

When challenged by reporters attending the conference about all the evidence—including publicly available documents, video and film graphically illustrating crimes by Thanos and the Thanos Team and multiple attempts to obstruct justice, Barr responded,

“Although it’s true that Thanos caused the death of half the sentient beings in the Universe, this was not technically a crime because he did not have a corrupt intent. Thanos was trying to address over population concerns and to win favor with the Mistress of Death,  and was not trying to advance his own personal business interests or that of the Trump Organization.”

When asked a follow up about business dealings between Thanos and Trump, Barr added,

“All talk of a Thanos-Trump Tower on Titan (where Thanos legally resides) ended by November of 2016 and was, therefore, not a violation of the emoluments clause, of the U.S. Constitution (Article I, Section 9, Paragraph 8) that generally prohibits federal officeholders from receiving any gift, payment, or other thing of value from a foreign state or its rulers, officers, or representatives. Any sort of universe-wide genocidal technology or talismans that Trump may or may not have received from Thanos would have happened prior to his inauguration as president.”

When challenged about the multiple, well-documented instances of Thanos obstructing justice, Barr responded,

“Let’s not get snitty about this.Thanos did not ultimately obstruct justice because the Avengers were ultimately able to achieve justice and therefore there was no underlying crime or corrupt intent. Thanos was understandably frustrated by the an unrelenting and aggressive partisan campaign by the Avengers to undermine his legitimate efforts to constructively depopulate the universe, and Thanos was just reacting based on that understandable  sense of frustration. What concerns me a lot more is evidence we are currently evaluating that the Avengers spied on the Thanos Team during the Infinity War.”

Trump’s lawyer, Rudy Giuliani, who attended the press conference (which some have criticized as an “unprecedented breech of protocol”) added,

Barr concluded, “The American people should be grateful that both Trump and Thanos are completely exonerated and that there was absolutely no collusion.  Now we need to put all this Russia stuff and investigations to bed and move on. After two years, the American people are tired of hearing about this. What they are really concerned about is the real threat to this universe—Hillary Clinton’s emails.”

Barr’s announced exonerations are seen as clearing the way for a Trump-Thanos ticket in 2020. A Trump-Thanos super pac has already started printing yard signs that read:

Cut Illegal Immigration in Half!