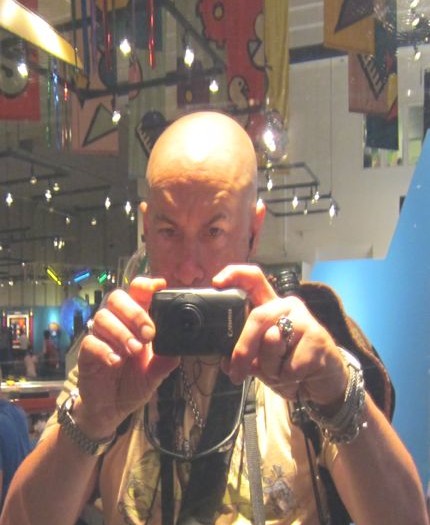 self-portrait at the EMP in Seattle

Man from Underground in an Unknown Country 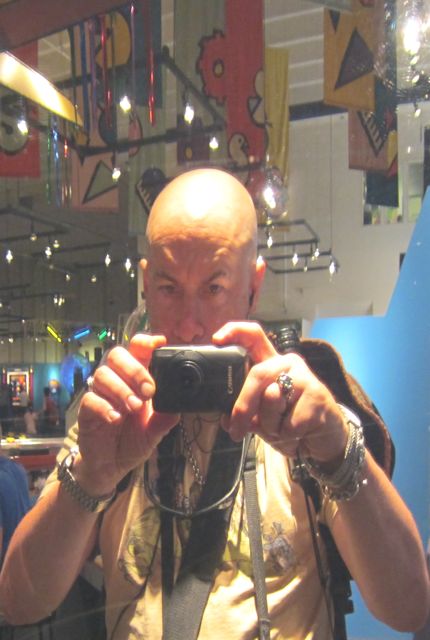 If you didn’t get to hear my Coast interview, a half hour interview about apocalypticism, 2012, and the Singularity Archetype was just put up on Whitley Streiber’s Unknown Country Listen here: http://www.unknowncountry.com/revelations/pathology-2012-millennialsim

Also, yesterday I had a dream that illustrates the inward/outward telepathic paradox of art and how it relates to the Singularity Archetype. I added this brief piece on the dream as an addendum to my essay on creativity The Path of the Numinous—Living and Working with the Creative Muse.

July 27, 2011 Early this morning I had an interesting dream related to the muse. In a somewhat chaotic situation where anomalous, almost apocalyptic weather is occurring, I am working on some sort of performance art piece. The art piece involves viewers looking down some sort of shaft, partly created by optical illusions, at a person sitting at a table far below. The person at the table is in a state of subterranean isolation and I think of naming the performance art piece after the Dostoevsky novella, Man from Underground. As I play with the optical illusions necessary to create the perception of the long shaft I am in some sort of subject/object reversal state as I experience myself as both the viewer and as the man from underground sitting at a table at the bottom of the shaft.

Many aspects of this dream relate it to the creative muse. Beside the obvious, that it involves a performance art piece, there is also the connection to the novella Man from Underground that has already been discussed in this essay—the encounter with the muse in the form of a voice from a clock radio in the middle of the night when I was fourteen. When I was designing the performance piece in the dream, I was well aware of my artistic intent. I was trying to make a statement that the artist must be a man from underground, must accept subterranean isolation in the depths, but that, paradoxically, from this intense isolation the artist can create things of universal import and of great interest to others. In the dream I am in the classic position of the artist as both performer and observer and am aware that I am creating optical illusions, that what seems like a shaft revealing a person in deep isolation is also a projection, a creative intrusion into the outer world of an artistic statement. For example, if we envision Dostoevsky alone in his garret writing Man from Underground in isolation at night, pages and pen illuminated by the flickering light of a kerosine lamp, it’s like looking down a shaft, seeing a person in the depths of isolated creation. But then if we shift our focus to view the present readers of Dostoevsky, we see, for example, young college students, 130 years after Dostoevsky’s death holding battered paperback copies of Notes from Underground and reading them with rapt attention. Our expanded view reveals that what looked like a shaft descending into total isolation was actually more like a light house, a beam of light, a telepathic artifact made in the 19th Century that is still glowing in the minds of myriad people in the 21st Century. If we can hold these two views in our minds we see the paradox of creation—that what seems like this isolated tunneling into the depths of our being can also be this telepathic broadcast into the minds of others, a broadcast that can transcend our life span. The optical illusion of isolation when we tunnel inward has never been more illusory than in the internet era.

I woke up before dawn this morning to write about a dream I just had. If you were to project a shaft of remote viewing into the ceiling of my room right now you would see the 21st Century equivalent of the 19th Century garret, an obsessed looking middle-aged guy leaning forward in his chair, shaved head illuminated by a computer monitor, listening to Pink Floyd Echoes and typing on a wireless keyboard. Another image of man underground, working in total isolation. But then with a few mouse clicks I post what I’ve written to my website and send it out as a newsletter to a thousand subscribers. From the bottom of the shaft a beacon of zeros and ones has shot out at near light speed and a thousand emails are appearing in email accounts to people who are mostly in other time zones. My predawn is evening for a subscriber in Australia opening the email and reading what I just wrote. The old art form of writing melds with cybertech to create a telepathy as the Australian scans what a few seconds ago were my private thoughts. If you expand your remote view to include all readers and subscribers, and this would have to include you reading this right now, you see that what seemed this solitary ritual is actually a mass telepathic event, one psyche interfacing, time displaced, with many others. All art is the exteriorized artifacts of individual psyches. These exteriorizations, if they are done well, create parallel intrapsychic experiences in those who perceive the art. Thanks to the internet, this inward/outward telepathic paradox is now available to almost all of us.

The context of the dream reinforces this paradox. I hadn’t been thinking much about this essay, but Joe, a new friend, a young poet in a graduate writing program who lives in the same building as I do, told me on the phone the previous evening that he was reading the Path of the Numinous, and listening to the podcast with great interest and wanted to talk to me about it. We arranged to meeting up the following evening. This social transaction happened just before I went to sleep. In the dream, I am in solitude creating this art piece that has an image of deep isolation, but the dream itself seemed to be seeded by a social transaction. Joe’s numinous interest in the essay, which I hadn’t been thinking about at all, seemed to inject vitality into the subject and catalyzed the dream. This social context adds a layer of parallel meaning. We create in what seems like the depth of solitude, but actually, as I discuss in a recent essay, Pushing the Envelope—Boundary Expansion into Novelty in Personal and Evolutionary Contexts, there are many social contexts to solitary creation. What we create in isolated depth can be broadcast into the collective and become a maximal case of our psyche interfacing with others. But another social aspect of creativity is revealed by the context of the dream. The numinous interests of other creative people can catalyze creative synergies. All human creativity has a social context. If it were not for the influence of other artists and creative people we would not even be ourselves. For this reason it is very important that we creative people find some sort of community with other creative people so that we can tap into the serendipitous synergies that arise when minds on parallel wavelengths converge.

The dream also had some connections to the Singularity Archetype (see Path of the Numinous and my upcoming book Crossing the Event Horizon for the connections between Dostoevsky, Man from Underground and the Singularity Archetype) . Outside the building where I was creating the performance art piece, there was anomalous weather that seemed almost apocalyptic, an inexplicable form of precipitation that seemed explosive. My response to the apocalyptic weather was to access the inward/outward telepathic paradox of art. This process is at the cutting edge of evolution, and Pushing the Envelope—Boundary Expansion into Novelty in Personal and Evolutionary Contexts expands this theme and is, I now realize, a sequel to this essay. Terence McKenna, my late colleague, when talking about what we should do during this critical phase of human evolution said, “Push the art pedal to the metal.”

Always interested in your feedback. Send to: [email protected]