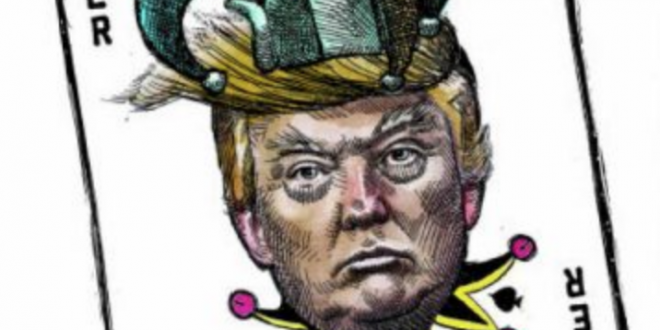 You are part of a collective psyche that has drawn the Trump Card.

It is a joker card, a shadow card, and for many of us the last card in the deck we wanted to be in a ruling position seated in the oval office.

But the Trump Card has, as Whitehead put it, “the formality of actually existing.” Not only does the Trump Card exist, the formal title of its existence is the most disturbing and jarring of all oxymorons. The Trump Card — the nuclear oxymoronic intensity so unbearable that a shudder passes through my whole body as I struggle to type out the words—- the Trump Card has the formality of actually existing as  “President Trump.”

The horror, the horror of the Trump card in the presidential position.

The Trump Card in the ruling position is a red-hot splinter in your mind you can’t get out. I want Bob Mueller to be my rescue daddy who will remove the nasty splinter burning in my mind. But it’s too passive and weak to wait for rescue, and I know that Mueller is the kind of daddy that does things in his own sweet time.

I know that if a splinter is going to be glowing in my mind anyway I need it to glow with meaning or it’s going to drive me crazy.

Sometimes a splinter is only a splinter, but the Trump Card is far too absurd, improbable, disturbing and surreal to be only a splinter and not an oracular joker card printed on a sheet of blotter acid. But the Trump card is at its essence a mind splinter that the collective unconscious has pulled from the shadowy bottom of the deck and we also need to relate to it as such.

Related to as an oracle, the Trump Card can have transformative power for narcissists like myself.

The age that has drawn the Trump Card and given it nuclear power is the age of the narcissistic personality type.

The Trump card is a dynamic card. Its meaning keeps unfolding.

As we observe the increasing signs of Trump’s cognitive and physical deterioration we see new levels of meaning.

The Trump card is revealing the invincible principle that the more of your vitality you give over to glorification of your ego identity the less you become, the less you have to comb over the hollowness of what dwindles inside of you.

The more you inflate yourself, the more you become buffoon, scarecrow and humpty dumpty ready to fall.

The more you inflate yourself, the more you become a Hindenburg disaster waiting to happen, waiting to engulf yourself and others in fire and fury.

See the Trump Card  rattling in the darkness of our collective attic.

See the Trump Card as the picture Dorian Gray keeps locked in the attic, the grotesque face of what any us could become if we gave our narcissism and selfish impulses free reign.

When you hear the voice of self-glorification speak or project images inside of you, see Donald Trump giving you a thumbs up for making the false ego great again.

When you stare overlong into the abyss of the Trumpocalypse, it stares back at you. . .

Let the Trumpocalyptic abyss stare back at you with its bloated Jack O’ Lantern face  tweeting evil spells into the collective darkness.

Who among us does not have a bloated monster inside  casting spells from the shadowy corners hidden by our blind spots?

Who among us does not have a gluttonous monster within that wants to feed on instant gratification?

Trump is not the only monster ego craving praise and hottie trophies.

Many of us have a side that wants to pig out on junk food and sacrifice soulful relationship for hollow fantasies and instant gratification.

The Trump card is the temporary embodiment and emblem of our collective ego—a chief executive who egregiously lacks executive function.

But executive function is an issue and a struggle for all of us.

Who among us does not have what psychologists, with their industrialized vocabulary, would call “self-regulation failures?”

Have you ever eaten something you knew you shouldn’t?

Have you ever said something, or put something on social media that was ill-considered?

Have you ever acted foolishly and/or offensively to someone you were attracted to?

Who among us could not benefit from a stronger, more aware and ethical executive function?

Executive function fluctuates in us all.

It tends to deteriorate when we are tired, sleep deprived, stressed, emotionally agitated, in the grip of our addictions, sexually aroused, or put in a situation of power for which we are unqualified and ill-prepared.

So let the Trump card be the perfect admonishing oracle card reminding us of how crucial our own executive function is.

Let the Trump Card be our negative inspiration to own our own shadow and take more responsibility for our own executive function.

Let the Trump Card inspire us by antithesis to be more responsible for the words we release in conversation and social media, for the foods we eat, for the way we treat people we are attracted to, for all the actions we take that affect ourselves and others and the world.

Goethe said if you want to clean up the whole world, begin with your own doorstep.

If you want to clean up the Trumpocalypse, begin by owning your own shadow and strengthening your own executive function.

The people who know Trump agree that he is like a child driven by the need for instant gratification, unable to restrain himself, unable to process information, unrestrained by ethical principles and losing a step, losing executive function.

With an aging and deteriorating child in the ruling position of our oracle reading, we need to be the grown-up in the room.

You need to be the grown-up in the room.

The Trump card will not remain in the ruling position, but the valiant struggle to be a responsible grown up, the struggle to own our shadow and to strengthen our executive function and take responsibility for its choices and actions cannot wait for the outer cards to get reshuffled.

To live as the antithesis of the Trump Card is a moment-by-moment sacred quest available in the nowever, a way to not only grow up but to grow forever.

As my friend, the late visionary poet Jack Savage, put it:

I’ll be my own priest and my own doctor,

No one else shall be my King.

The King’s authority has been restored.

Dispatches from the Trumpocalypse—Youtube audio recording of all of Jonathan Zap’s Trump writings except this one.

Links to earlier Trump dispatches and other relevant links:

A Splinter in Your Mind

All the Conspiracy Theories about Killary are True

You Are Living in a 3% Alternate Reality Since Trumpocalypse

Twin Horsemen of the Trumpocalypse

If Not Trump, You a Dream on the Morning of the Inauguration

How Soon is Now Podcast (Episodes 3 and 7 are trialogues with Daniel Pinchbeck, Jonathan Zap and Anthony Peake