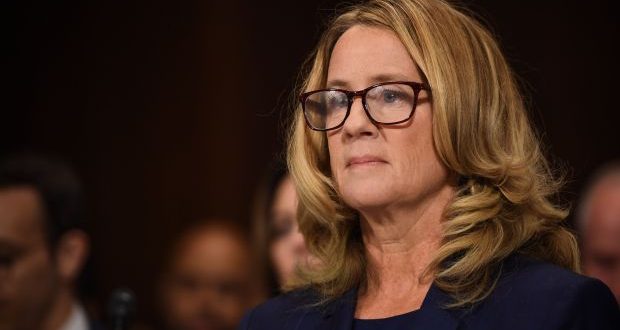 Live updates on the Kavanaugh hearing:

Everyone on Fox News forced to admit that Dr. Ford is exceptionally credible and that Kavanaugh seemed weak and robotic when interviewed on their network.

I would say that Dr. Ford is the most credible witness imaginable.

So many of the Republican’s tactics are blowing up in their faces.

Trump’s “big fat con job” characterization of what we would see today is blowing up in his face like a clown’s exploding cigar.

Something not commented on enough about the Trumpocalypse is the number of surreal improbabilities/synchronicities/ mythological elements.  I’ve written about many of these in the couple of dozen articles about Trump you can find here, but the Kavanaugh chapter adds a few more.

Consider the metaphorical and mythological aspect of Kavanaugh, according to Dr. Ford, holding his hand over her mouth to keep her cries for help from being heard! Could there be a more perfect emblem for the Me Too movement?

And then there is the stunning parallels to Anita Hill, with a number of the same Republican dinosaurs still there and acting just as ignorantly as they did then, and not even allowing the FBI investigation that Anita Hill got.

The improbability that both of these two historic witnesses/survivors of two (probable) sex abusing male, Republican, Supreme Court nominees both turn out to be college professors!  And that Dr. Ford should also be a psychologist associated with Stanford and other top institutions and with more than sixty published peer-reviewed articles and with expertise about memory, trauma and PTSD. At the same time, Dr. Ford’s r feelings are so recognizably normal for a woman who had been traumatized by an assault at an early age, and you have a sense of the “central casting” aspect that has characterized many of the faces of the Trumpocalypse.

Although I am clearly not an unbiased observer of these proceedings (and I’m not sure who could be unbiased), and it’s obvious that I’m biased  against Kavanaugh, I cannot say that I believe Dr. Ford’s story 100%.  I’d say it’s more like 97.9%.

There are few things I would give 100% credibility to, especially when it based on a few people’s testimony, no matter how credible they might seem.

I feel it’s important to leave some doubt when arriving at a conclusion that our emotionally sympathies, etc. incline us toward. I think the statistic is that about 4% of claims of sexual assault are fraudulent. I witnessed someone make multiple fraudulent claims about sexual harassment at a business I worked at (none of those accusations were directed at me).

It is also important to note that the “beyond a reasonable doubt” legal principle in criminal cases does not apply here, because it’s not a trial but a job interview for the lifetime privilege of serving on the highest court on the land. Based on that,  the vast asymmetry of credibility of Dr. Ford versus Kavanaugh (who has lied to to the Senate numerous tines over several years) is far beyond any reasonable standard for not only blocking him from the Supreme court but also to begin impeachment hearings to take away his Federal judgeship.

He is looking really weird, tense and off—nervously fussing with his water bottles, name placard,  and papers. He makes Captain Queeg seem relaxed and poised.

His eyes look terrified and filled with rage and frustrated will to power.

He’s no doubt got good reason to feel what I’m seeing in his face, because I think he senses that his career is about to —well he just quoted an enemy as saying that they want to “blow me up and take me down.”

I hope that’s what’s going to happen, but the enemy is his own shadow.

Waiting for him to call this a “high-tech lynching.”

Wow, he’s fatalistic, conceding, “You may defeat me in the final vote.”

I think Trump and the Republicans are probably in panic mode looking for a face-saving way out, a way to throw Kavanaugh under the bus without disgusting their base—but I can’t see a way for them to do it. They’ve brewed up their own Kavanstein Monster.

. . . he’s undergoing an excruciating melt down right now and apropos of no particular content—talking about why he kept and saved daily calendars when he seventeen years old and he’s almost sobbing.

“My calendar shows, all but definitively, that I was not there!”

“I was at a legendary five-star basketball camp”

Such horribly lame phrases and he’s reading from a prepared statement!

“Going to church was like brushing my teeth— automatic—and it still is!”

OMG, with all these handlers  they had working with him—who signed off on this statement?

Right now it feels like you’d wish some compassionate Republican ally will pass him a cyanide capsule to spare him further self-humiliation.

“The calendars are obviously not dispositive on their own.”  —Nice one Brett, you’re really scoring with these catchy phrases. Trump was already dissing your lack of television razzle-dazzleness—-you’re lucky you’re not in Trump Tower or he’d pull that lever on his desk and watch you plummet into his gold-tone trimmed piranha tank.

On the other hand there is so much bathos that he may be making it harder for Republicans to dump him because it will look like kicking someone during a massive personal meltdown.

OMG, I might need trauma therapy after watching him fall apart! This is painful!

Kavanaugh may be lacking in empathy—he cold shouldered Fred Guttenberg, whose 14-year-old daughter was shot and killed at Parkland https://www.huffingtonpost.com/entry/brett-kavanaugh-fred-guttenberg-parkland-snub_us_5b8ecc9ee4b0162f4727a279,

But you got to hand it to Brett, whatever he lacks in empathy for others, he more than makes up for in a nearly infinite capacity for self-pity—true, authentic, poignant, rip-roaring self-pity on public display.  So dramatic! Who would have expected that the survivor of a sexual assault would be the far more calm and collected one! My guess is that having the truth on your side helps you to be calmer (and to pass polygraph tests and want FBI investigation.)

Even the mildest questions have him stuttering and contorting, he’s just said “we drank beer” about twenty times in the last two minutes. Nervous wreck.

I would love to hear what a body language expert would say about this—he’s just exploding with every nervous tic ever known to man.

Just heard that Brett ripped up a prepared speech and wrote this himself—totally believe that—and that he wrote it not to get into the Supreme Court but to defend his life—believe that too.

He will not be on the Supreme Court— he knows it, we all know it now.

Lindsey Graham trying to go for an Oscar in what Obama recently called “manufactured outrage.” But he can’t quite keep a straight face—trickster on steroids.

Give it a rest, Lindsey.

Pundits are saying he’s auditioning for attorney general—seems plausible—most of the other Republican senators on the committee are too old and stiff to pull off the phony, We’re the really victims!! histrionics.

Camera catches Lindsey right after his little solo smiling, laughing and strutting in the hallway just now. He doesn’t give a shit about Kavanaugh—he’s working on his own power play–a chance to do a big solo performance for the base. Inside his head he’s saying, “Graham’s got his groove back! Graham’s got game! You go Girl!”

Brett openly violating the decorum expected of a Federal judge before the Senate Judiciary Committee. His loss of restrain partly explained by his no longer believing that he has any chance and so instead he’s just fighting back trying to defend his shattered reputation. His statement in his prepared remarks that this was happening because of a lame, Trump-style conspiracy theory—the Clintons seeking revenge, etc.—is not the kind of thing anyone ever dreamed would come out of the mouth of a prospective Supreme Court Justice.  Hey post-truther conspiracy types—can’t you even do the most obvious reality test—if this is a a “classic, big-fat, democrat con job” what about Gorsuch? Remember him, the one who got the seat stolen from Obama, the one who went to the same high school as Brett? Why no sex scandal smear campaign against him? Duh?

So touching right now, Ted Cruz, feeling the pain of another entitled Republican who might not get what the was sure was a done deal.

Ted, Ted—-listen to me for a minute Ted. You doing moral outrage and pained compassion—hard sell—not your natural strong suit brother—if you could bring down your oily, diabolical, do-anything-to-grab-power, serpent -like energy by even twenty percent it would really help when you need to get into that pained/ moral outrage mode—but it’s never going be your strong suit—not every actor has that kind of range. Go with your natural strengths Ted—you could really shine as a old-school villain twirling a waxed black mustache while cackling demonically above a young maiden tied to railroad tracks for example—you just got to be yourself Ted, you be you, you know you want that waxed mustache — let your Ted out—

Trump just tweeted—low-energy, Trump-Tweet boilerplate (sad):  he’s morally outraged! every body else is a sham and disgrace!, etc. ends with The Senate must vote!  Translation: I’d dump this loser,  a two on TV, a negative two!, but it would piss off my base so I can’t shiv him for now. I’ll let the Republican senators take the hit for my stupid choice. Rock on! Trump rules!

Anyone who isn’t committed to vote next election day is a fool and moral failure.

You can find most of my thoughts on the Trumpocalypse here: http://realitysandwich.com/322552/dispatches-from-the-trumpocalypse/