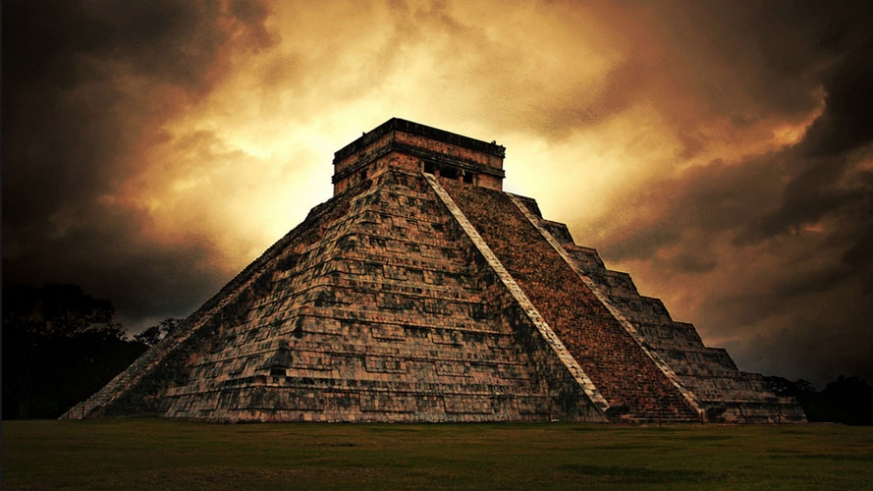 Under somewhat ominous circumstances on Sunday, February 12th of 2017, I drove from where I live in Boulder to the home of my old friend and colleague, John Major Jenkins, who lives in Windsor, Colorado. It was a beautiful day with Colorado’s glorious high-altitude lighting and unseasonably warm temperatures. The metaphorical weather, however, was out of synch with the actual weather because there were dark, storm clouds massing on the personal horizon of my old friend. John is facing a life-threatening health crisis, and the main purpose of my visit was to record the long conversation you have in front of you, an in-depth reflection on the meaning of John’s most important discoveries, and the triumphs and tribulations of a path of exploration he began when he first visited Mayan ruins at the age of twenty-two.

It is the sort of health crisis where one could still hope for miracles, or at least to be an extreme statistical outlier, but only a fool would neglect preparations to cross the event horizon. And John is no fool of course, and has been spending all his free time in ultimate deadline writing and publication mode.

Soon after I arrived, John showed me a bound proof copy that had just arrived of the novel he’d been working on for many years.

He reminded me that it contained a character based on me and asked permission to give the character my actual name.

You can order a copy here: https://www.createspace.com/6828482
Additional information about the book: http://www.johnmajorjenkins.com

For a couple of hours we had a private talk and then set up the equipment to record our conversation. We each had our own recording device in case one should fail, and together we pressed record on our respective gadgets and began talking. When it was time to press stop, the incandescent glow of early afternoon had descended into night, and John’s face was only dimly illuminated by a laptop screen a few feet away. We were astonished to discover that we had been talking, without a break, for over five hours.

The range of what we talked about was epic—the origins of his work, his experience as a twenty-two-year-old hitchhiking across Mexico and Central America in search of ancient ruins, his great discoveries, why his work has  been relentlessly attacked and misrepresented by both academic Mayanists and New Age true believers, the connection between the Mayan galactic alignment astronomy, Creation Mythology and the Perennial Philosophy and why the Maya might be right that we are living through a cycle shift of World Ages, how that shift correlates to the evolution of both technology and human consciousness,  the twisted cultural history of the 2012 phenomenon from the perspective of my 2010 essay, Carnival 2012, how to live your life to be in synch with a great cycle change, the origins of patriarchy and the shift of hemispheric dominance in the brain created by alphabets and the shift in the other direction due to the explosion of visual technologies, what he would tell his twenty-two-year-old self who went traveling in Central America and became fascinated with the ancient Maya, astronomy and calendar systems, the effects of his closest relationships on the way his life played out, and in general how things look to a man of cosmic vision when he is quite likely standing near the edge of his personal event horizon.

It was as profound, emotionally intense, and consciousness stimulating a conversation as I’ve ever had, and I’m grateful to have been part of it and even more grateful that we were able to record it and share it with you.

Someone once described stories as “equipment for living.” This conversation is, among other things, John’s story. His personal story, as well as the content of what he discovered, are equipment for living that he would like to offer you. There is so much glib advice out there to Follow your dreams!, but most of it is flimsy equipment for living that falls to pieces like a smiley-face sticker-encrusted styrofoam cooler would when your journey requires you to descend into a maze of desert canyons. John’s story, as presented here, is an unsparing account of his triumphs and discoveries, but also of his struggles with unwarranted attacks and misrepresentations of his work, the collapse of a troubled marriage, and a life that was far less glamorous than it often seemed to others when John was traveling the world, speaking at conferences, and appearing on cable television.

Finally, John’s story is the story of 2012 as a genuine artifact of Mayan culture, as a cultural meme that psychopathologized in recent memory and a possible time marker for a massive cycle shift that was underway before 2012 and is only intensifying in 2017.

John once told me that 2012 is not about the “end of time,” but about “the center of time.” A life well-lived is a life lived from that center. A life lived from the core of one’s being is always a journey toward the experience of meaning, and such lives are shining examples, like stars twinkling in the night of time.

It will take a five-hour sacrifice of your time to explore the depths of this conversation, but we hope it will be useful equipment for your journey toward the experience of meaning.

John and I met through our late colleague, Terence McKenna during a weekend of high strangeness during the Spring of 1996. We co-wrote a narration of those events.  Here’s the version of it on Zap Oracle:

A Mutant Convergence—How John Major Jenkins, Terence McKenna and Jonathan Zap met during a Weekend of High Strangeness in 1996.

How was I Introduced to 2012?—Reflections on Time, Terence McKenna, and the Synchronicities of Fate.

Vision at Chichen Itza is a photo travelogue of a journey to visit Mayan ruins I took with John and a couple of other friends in 2004. It also tells the story of some anomalous experiences I had at one of the ancient sites.

Carnival 2012, a Psychological Study of the 2012 Phenomenon and the Twenty-Two  Classic Pitfalls and Blindspots of Esoteric Research within that document you’ll find links to my other writings related to 2012. Much of it is based on conversations with John, and things we learned observing 2012 psychopathology over a period of more than twenty years.

If you prefer to listen to Carnival 2012 via Youtube.

John’s websites are: www.Alignment2012.com, www.TheCenterfor2012Studies.com, www.Update2012.com, and www.JohnMajorJenkins.com.  You’ll  find a large collection of his books for sale on his Amazon page.  Comments can be left here and on youtube.

Technical Note on Audio: It turned out to be fortunate that we used two recording systems because each of them failed in a different way. John’s recorded with much lower sound quality than it should have (though our words are still perfectly clear, it sounded like we were talking inside an empty swimming pool). My recorder captured excellent sound quality but it ran out of space forty-five minutes before the end. So, expect an acceptable, but noticeable drop in audio quality after 4:15:30 <<<<turn down the volume before you get to this point because there will be a big boost in volume as well as drop in quality.