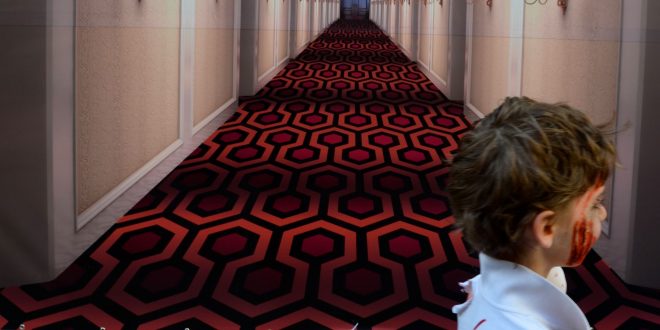 The essential idea of Halloween is that it is liminal (between and betwixt), an opening between the world of the living and the world of the dead—the spirit world. Halloween is the temporal zone on the calendar that is closest to what legendary paranormal researcher Charles Fort called “window zones.” Window zones are places like haunted houses and certain power spots where the veil between the realms is thinner and entities from other dimensions can crossover into our reality.

Halloween can be considered a liminal window zone in other ways. On Halloween you have a zone of time in which the maximum number of people will blur their identity and assume a different persona through costuming. Often these costumes are not chosen at random, but reflect aspects of the psyche not usually given expression. Costumed people can experiment with being a different gender, delve into violence and death without the usual consequences, and portray themselves as super heroes or other beings that possess potent magical powers.

Surrealized zone likes Halloween, Burning Man or Comic Con, where people shape-shift into novel forms that reflect the unconscious more than conventionalized values and aesthetics, are liminal window zones where the boundary between the imaginal and what gamers call the “RW” (real world) blurs. Just as the liminal zones of dawn and dusk are seen by many spiritual and magical traditions as powerful times to express intentions and seek visions,  you may also find that synchronicity, vision and inspiration are heightened in surreal zones. They can be temporary autonomous zones where one can shape shift and deviate from conventional expectations. I have found for myself that these surrealized zones heighten my imagination, make visions more accessible, and allow me to feel that I am walking along edges where various realms impinge.

If you want to explore the idea of liminal window zones a bit more, here are some of my thoughts on liminality and magical doorways:

Liminality is the state that exists between and betwixt, at the edges of boundaries, at dawn and dusk, in the moments before falling asleep and the moments of resurfacing from the dreamtime into waking. It is a time that is often more vulnerable, but also more alchemically charged. The liminal state is not as fully formed as what is on either side of it, it partakes of both sides, and therefore it is an ideal state for creating new forms. Most of the Zap Oracle cards, for example, were and are created in liminal space. My favorite time to write is in the very early hours of morning before dawn, when I have just come out of the dreamtime and before most of the surrounding community has awakened. It is a time when most people are at the peek of their REM cycle, before the glare of daylight begins, and the sounds of garbage trucks backing up are heard, and the thought-forms of commuters crowd the psychic space. I have always been attracted to airports, which are liminal spaces always in transition, and I like to live and work at hostels where people stay transitionally. I have also noticed that the days before departing on a significant journey are often times of greatly heightened intensity and strange occurrences. I am still in my home base, but there is a sense of impending change, and the familiar world is altered by the proximity to an event horizon. In the case of liminal space occurring before a major transition, there is likely to be a test or trial often involving threshold guardians before one can cross the event horizon into the new place/inner state.

An excellent article on Liminality in Wikipedia states:

The liminal state is characterized by ambiguity, openness, and indeterminacy. One’s sense of identity dissolves to some extent, bringing about disorientation. Liminality is a period of transition where normal limits to thought, self-understanding, and behavior are relaxed – a situation which can lead to new perspectives.

Examples of the permanently liminal would include people who na√Øvely abused hallucinogens and have become “perma-fried.” A theory of schizophrenia developed by Terence McKenna (see The Path of the Numinous for a discussion of this theory) is that many schizophrenics are people who were undergoing spontaneous shamanic initiatory experiences without any guidance, and with neuro-pharmecutical sabotage from modern psychiatry, so that they never pass through the initiation but remain permanently liminal. This theory would account for the complete absence of schizophrenia and many other psychopathologies noted by anthropologists who have studied tribal societies. The artist, shaman, prophet, mystic, seer, or visionary is one who is able to enter liminal space and emerge from it with a coherent cultural product — words, images, etc. — to share with the collective.

Other liminal beings include illegal aliens, as they exist in a place but without established status. Transgendered persons, bisexuals or others of uncertain sexual orientation, people of mixed ethnicity, the accused who have not yet been judged guilty or not guilty, hybrids, cyborgs and shape-shifters, etc, all exist in liminality. A liminal time of anyone’s life is adolescence where one is no longer a child, but not quite an adult, and where one is in a tense, metamorphic state of experimenting with identities, and from which one may transform higher or lower. Human incarnation can be seen as a liminal state between birth and death where one is subject to constant change and transformation. I believe the human species to be in a liminal, adolescent phase of heightened instability occurring in a zone between the possibilities of extinction and quantum evolutionary change. Liminal space is a place of hauntings and visions, like William S. Burrough’s “Interzone” or the TV series The Twilight Zone. As the Wikipedia article points out,

“The name of the television fiction series The Twilight Zone makes reference to this, describing it as ‘the middle ground between light and shadow, between science and superstition’ in one variant of the original series’ opening. The name is from an actual zone observable from space in the place where daylight or shadow advances or retreats about the Earth. Noon and, more often, midnight can be considered liminal, the first transitioning between morning and afternoon, the latter between days.

“Within the year, liminal times include equinoxes when day and night have equal length, and solstices, when the increase of day or night shifts over to its decrease. Where the Quarter days are held to mark the change in seasons, they also are liminal times.

“New Year’s Day, whatever its connection or lack of one to the astronomical sky, is a liminal time. Customs such as fortune-telling take advantage of this liminal state. In a number of cultures, actions and events on the first day of the year can determine the year, leading to such beliefs as First-Foot. Many cultures regard it as a time especially prone to hauntings by ghosts — liminal beings, neither alive nor dead.”

If you took the time to read this card, it  may indicate a propitious time to appreciate the value of liminal spaces and beings, and the conscious use of liminality as a catalyst for metamorphosis and vision.

Opening the magical doorway. You open it every night when you enter the dreamtime, and death awaits as a magical doorway for the integrated spirit, but you may access magical doorways in all sorts of other ways as well. Empowered imagination can open portals into other worlds. For example, both the writer and the appreciative reader of a great fantasy work are able to step through a portal and experience an alternative reality. One of the greatest magical portals is when a soulmate grants you access to their inner world. Oracles are designed to open portals into the plane of inner vision.

Portals may open in the midst of the haste and bustle of the mundane world. Sometimes we can recognize the portal by its numinosity; it lights up in our mind’s eye with an uncanny significance. Numinous objects are always worth investigating, but some should be approached with caution. The most unreliable numinous object is a person of great physical beauty because we will tend to literalize that person’s numinosity and assume that the uncanny feeling of significance derives from the beautiful person and should be worked out interpersonally. This can be a dangerous delusion because this sort of numinosity is mostly intrapsychic and has more to do with us than with the person sparkling in our mind’s eye. (See Stop the Hottie!) Other times the portal opening goes unrecognized because it comes as a seeming accident, as an irritating, annoying, disturbing, unsettling, unexpected event, and it takes some intuitive skill to recognize the accident as a window of opportunity. Windows of opportunity are opening and closing all the time. Stay alert and present in the moment to recognize those key portal openings that further your quest and step through them. Be wary so you don’t get sucked into a portal that will side track you.

Recognize the portals as they open and close in your world, and make a conscious choice about entering or passing them by.

For more writings by Jonathan Zap related to window zones, crossover effects and other realms go to the Surreal Zone Seciton of  the Zap Oracle website.  Halloween is traditionally seen as an ideal zone to consult oracles. You can consult the 664 card Zap Oracle for free. A free membership saves your readings indefinitely.