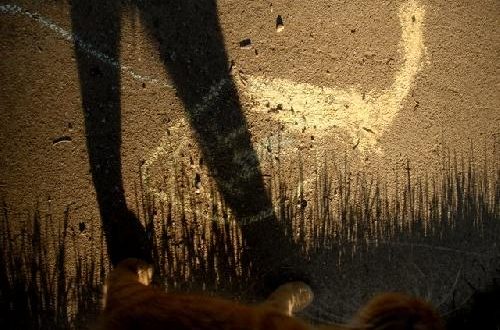 Liminality is the state that exists between and betwixt, at the edges of boundaries, at dawn and dusk, in the moments before falling asleep and the moments of resurfacing from the dreamtime into waking. It is a time that is often more vulnerable, but also more alchemically charged. The liminal state is not as fully formed as what is on either side of it, it partakes of both sides, and therefore it is an ideal state for creating new forms. Most of the Zap Oracle cards, for example, were and are created in liminal space. My favorite time to write is in the very early hours of morning before dawn, when I have just come out of the dreamtime and before most of the surrounding community has awakened. It is a time when most people are at the peek of their REM cycle, before the glare of daylight begins, and the sounds of garbage trucks backing up are heard, and the thought-forms of commuters crowd the psychic space. I have always been attracted to airports, which are liminal spaces always in transition, and I like to live and work at hostels where people stay transitionally. I have also noticed that the days before departing on a significant journey are often times of greatly heightened intensity and strange occurrences. I am still in my home base, but there is a sense of impending change, and the familiar world is altered by the proximity to an event horizon. In the case of liminal space occurring before a major transition, there is likely to be a test or trial often involving threshold guardians before one can cross the event horizon into the new place/inner state.

An excellent article on Liminality in Wikipedia states,

“The liminal state is characterized by ambiguity, openness, and indeterminacy. One’s sense of identity dissolves to some extent, bringing about disorientation. Liminality is a period of transition where normal limits to thought, self-understanding, and behavior are relaxed – a situation which can lead to new perspectives.

Examples of the permanently liminal would include people who naïvely abused hallucinogens and have become “perma-fried.” A theory of schizophrenia developed by Terence McKenna (see The Path of the Numinous for a discussion of this theory) is that many schizophrenics are people who were undergoing spontaneous shamanic initiatory experiences without any guidance, and with neuro-pharmecutical sabotage from modern psychiatry, so that they never pass through the initiation but remain permanently liminal. This theory would account for the complete absence of schizophrenia and many other psychopathologies noted by anthropologists who have studied tribal societies. The artist, shaman, prophet, mystic, seer, or visionary is one who is able to enter liminal space and emerge from it with a coherent cultural product — words, images, etc. — to share with the collective.

Other liminal beings include illegal aliens, as they exist in a place but without established status. Transgendered persons, bisexuals or others of uncertain sexual orientation, people of mixed ethnicity, the accused who have not yet been judged guilty or not guilty, hybrids, cyborgs and shape-shifters, etc, all exist in liminality. A liminal time of anyone’s life is adolescence where one is no longer a child, but not quite an adult, and where one is in a tense, metamorphic state of experimenting with identities, and from which one may transform higher or lower. Human incarnation can be seen as a liminal state between birth and death where one is subject to constant change and transformation. I believe the human species to be in a liminal, adolescent phase of heightened instability occurring in a zone between the possibilities of extinction and quantum evolutionary change. Liminal space is a place of hauntings and visions, like William S. Burrough’s “Interzone” or the TV series The Twilight Zone. As the Wikipedia article points out,

“The name of the television fiction series The Twilight Zone makes reference to this, describing it as ‘the middle ground between light and shadow, between science and superstition’ in one variant of the original series’ opening. The name is from an actual zone observable from space in the place where daylight or shadow advances or retreats about the Earth. Noon and, more often, midnight can be considered liminal, the first transitioning between morning and afternoon, the latter between days.

“Within the year, liminal times include equinoxes when day and night have equal length, and solstices, when the increase of day or night shifts over to its decrease. Where the Quarter days are held to mark the change in seasons, they also are liminal times.

“New Year’s Day, whatever its connection or lack of one to the astronomical sky, is a liminal time. Customs such as fortune-telling take advantage of this liminal state. In a number of cultures, actions and events on the first day of the year can determine the year, leading to such beliefs as First-Foot. Many cultures regard it as a time especially prone to hauntings by ghosts — liminal beings, neither alive nor dead.”

The occurrence of this card (depending on its position in the reading and depending on your position in cycles of change and transformation) may indicate a propitious time to appreciate the value of liminal spaces and beings, and the conscious use of liminality as a catalyst for metamorphosis and vision.