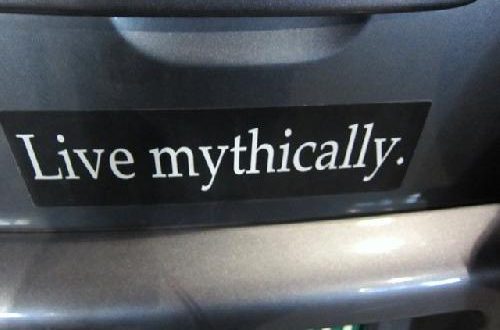 A myth, in the proper sense, then, is a story that has emotional resonance

at the abyssal depths of the human psyche — for that is its very source, its point of origination in what Campbell called “the mythological zone.”

If an unmythological life were possible, it might not be worth living.

To really flesh out the meaning of this bumper sticker could take as many pages as Jung’s collected works. If you’ve never read Jung consider this an invitation. (See Thoughts on Jung).

We are mythological creatures, but may not recognize the mythologies that we live out and that live us out. Most people are possessed by one or more archetypes (the living cores of mythologies and psyches), but don’t know it. When you unconsciously live out a mythology, it often becomes a tragedy or dead end. For example, Bruce is in his thirties and owns a small car-detailing business that he would like to turn into a franchise. He sees himself as a future billionaire and the envy of everyone with whom he went to high school. An implicit, unexamined mythology is always playing in the background of his mind: I’m the comeback kid. Everyone underestimates me and counts me out. They have no idea of my talents and ruthless determination. I’m the underdog, the dark horse they’ll never see coming. I’ll show them what I’m made of, all those people in high school who thought I was nothing. I’ll show the world. Bruce doesn’t recognize that his mythology keeps him addicted to being the embittered, resentful outsider always desiring an image of big-time success. The mythology does not encourage success, but instead reinforces his perpetually resentful status. The self-pity and bitterness implicit in the mythology blinds Bruce to how poorly he treats others. He is supposed to be the underestimated, under-appreciated come-from-behind underdog, and that mythological position does not allow him to recognize that he is actually a bullying employer and that’s why no wants to work for him. Similarly, he’s an abusive boyfriend, the few women he can find willing to go out with him are not the supermodels he fantasizes about showing off when he’s made it, so he treats them as temporary embarrassments. Bruce’s mythology encompasses him. He never steps outside of it to examine its validity and massive consequences.

Free will is rarer than many suppose, and to earn it you must know what sort of mythology you are playing out. Self-awareness of the mythological depths of your life opens the possibility of shaping your destiny rather than merely being shaped by an implicit, mythological destiny that lives you out as much or more than you live it out.

To live mythically means that you live out your mythology from an empowered and self-aware stance.