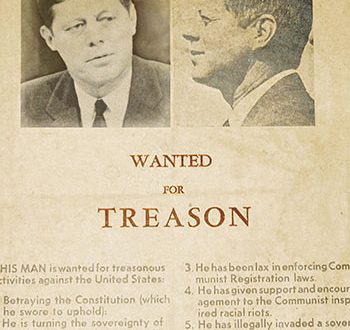 The Demonizing of high-profile Democrats is a golden-oldie with a much a longer history than most realize. Hillary is merely the latest—the same was done to Obama,  John Kerry (remember his Swift Boating?) Bill, Jimmy Carter, LBJ, JFK, FDR (who was called a traitor to his class for the New Deal). When Jack Kennedy made plans to go to Texas in 1963 many people warned both him and Jacqueline not to go because of all the right-wing conspiracy folks demonizing him in all the southern states. The above image is of a handbill that was passed out on the streets of Dallas before his assassination. People in Texas called him a traitor, were shouting to lock him up just as bad as much as they are now shouting to lock Hillary up. They said Jack was pro-communist and anti-Christian. On the day of his assassination there were full page ads in Dallas newspapers accusing him of a treason. People whose sense of history doesn’t reach further back than the birth of Facebook don’t get the context. They think Hillary is the most evil politician of all time and don’t realize that people with similar mind sets said the same things about Obama, Bill, Jimmy Carter, Kennedy, Truman (who was nearly hounded out of office) and FDR (who was called a traitor to his class because of the New Deal). Did Kennedy have a shadow side—we know he did, but he wasn’t a traitor, wasn’t this demonic figure that every high-profile Democrat is turned into. Does Hillary have a shadow? Of course she does. But I don’t think it’s worse than that of most other presidents. Does Donald Trump have a shadow? No, the collective shadow has him, he is a Shadow, a personification of the dark side of ignorant, inflated demonizers. People keep saying we’ll see another side of Donald Trump, but as someone put it recently—there is no other side, he is the evil twin. OK, yeah, if we really had to look for it there probably is a nicer side to the Donald, he may treat a few of his close associates well or whatever, but for the purposes of this election, he is the Shadow and Hillary is more like a smart, flawed person, immersed in realpolitik and some corrupt machinations who has a hook in her personality and career for people to project the shadow onto. But she also has an early history of sacrificing financial gain to work for  altruistic causes (as does Obama and Tim Kaine, but emphatically not Donald Trump). She’s not a cross between Medusa and Cruela Devil, not a shape-shifting reptilian Illuminati Luciferian who eats live fetuses for breakfast, just another flawed, but highly competent, high-profile Democrat getting demonized same as usual.