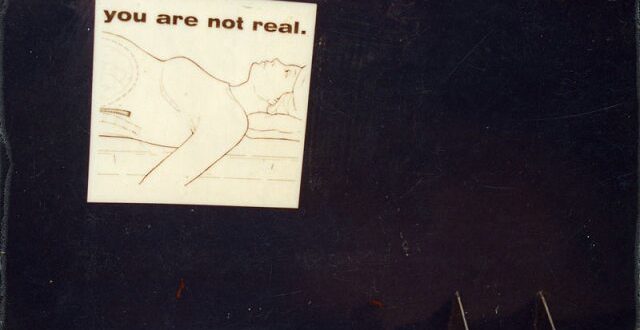 Card #69 – Pulling back the Curtain

In order not to live continually clouded by the many wizards of deception, you must keep your will focused on pulling back the curtain. First you must never lose sight of the curtain and the awareness that there are forces just out of sight, manipulating our perception, even constructing the reality we perceive. We look about at a world of seemingly solid objects while intellectually we know it is mostly empty space inhabited by subatomic particles, some of which are clouds of probability not to be located in any particular place. We tend to experience our bodies as a coherent whole when we are actually a cooperative network of fifty trillion cells, each of them like a small city with numerous processes going on simultaneously. There is, in other words, a curtain hiding vast complexity and strangeness from all of our sense perceptions.

For example, a living, breathing person enters my perceptual field and stands before me. I do not see his fifty trillion cells. I do not see the bizarre world of subatomic particles or vibrating multi-dimensional super strings or whatever it is that makes up those cells. What I do see is ambient light reflecting off the topography of his skin, hair, and clothing. This reflected light enters the cornea of my eye, a simple convex lens, and appears upside down on the back of my retina. My brain employs various of its processing wizards to turn that image right-side up and interpret the information it has received so as to construct an image, a neurological artifact. This process takes time, so actually what I perceive is a reconstructed simulacrum of a past event. When I pass my gaze over this person my eyes are blind as I move them. My brain freeze-frames individual still shots and pastes them together to create the false impression of continuous motion. The wetware in my head has thrown together a video of past events, but that is still just the least of the curtains standing between me and this other person. I am far more subjective than a camera made of meat and bone that records things because I too am a person, a social mammal, and between me and the perception of this other person are a thousand layers of conditioned projections, stereotyped expectations, inaccurate notions and prejudices that shimmer all around the other like heat ripples rising from hot asphalt. His skin color, age, body type and so forth are each highly charged signifiers that resonate with emotional memories, are refracted through schemas and all the various conditioned templates in my mind. Everything I don’t know about myself, and therefore don’t know about other people and the larger reality, stands between me and my perception of the other like heavy, opaque shadows. I am looking through a glass darkly and there are whole curtained off areas I am scarcely aware of. I live, therefore, in a world of projection screens, optical illusions, misdirection, blind spots, smoke and mirrors.

To pull back the curtain I need to be deeply and persistently aware that I am living in a curtained world, and that there is so much more going on behind the scenes. Most of us realize when we watch television news that there are heavy curtains behind the video screen. The news that is projected on our screen is flattened, idealized, digitally enhanced, and behind the curtain are backroom deals, hidden agendas, and classified information. We know that there are curtains hiding much from us when it comes to world affairs. But we are often much less aware of the heavy curtains that hide from us so much of what is going on with our internal affairs. The news anchors in our heads tell us a narrative, that so-and-so is sleeping with so-and-so, for example. But behind the gossipy news of the day are vast curtained-off areas that are edited out of the news show. For example, the news anchors in our heads may not know much or say much about what is it that drives our sexuality and makes us care that so-and-so is sleeping with so-and-so. The cameras in the television studio are pointed away from the curtains. The cameras zoom in on the talking heads and attractive body parts and we don’t see or hear much about the strange, potent forces that cause us, for example, to be intensely attracted to one kind of person and not other kinds. Behind the facade levers are being pulled and dials are being turned and a particular person lights up gigantically magnified on our screen, and what they say makes the very ground under our feet tremble with subwoofer vibrations. Dramas light up on our screen and engage, even obsess our attention. But to know what’s going on we need to take off our 3D glasses and look back over our shoulder at the flickering light of the projector coming from that curtained off area.

There are time-honored technologies and pathways available to aide us in pulling back the curtain. The most ancient and classic are oracles, dream work, psychoactives and meditation. Oracles, through the principle of synchronicity, reveal archetypal forces and patterns of change working behind the curtain. The I Ching has been in continuous use for several thousand years and oracles have aided revelatory vision from prehistory to the present (see About the I Ching). Jung felt that most dreams were compensatory, that they compensated for defects in the waking consciousness. Every culture except fundamentalist materialism has recognized that a successfully interpreted dream can be a potent revelation of what’s happening beyond the awareness of the waking personality. (See Some Things to Consider Before Dream Interpretation and check the products and services section of this site to find out my dream interpretation and I Ching services). All cultures have employed psychoactives, despite their hazards, as potent sources of revelation. Those who want to enforce the curtained view have interposed police-state tactics to severely punish those who want to eat forbidden fruit from the tree of the knowledge of good and evil. It is an essential human right to do what our ancestors have done through countless millennia — use psychoactive substances to expand consciousness and pierce through the curtained view. Google “Terence Mckenna” for visionary advice on this path and consult erowid.org. Meditation, if nothing else, can show how little control we typically have over what appears on the inner screen. By quieting the news anchors in our heads we expand our ability to comprehend unnarrated realities. Mindfulness meditation — alert awareness to what is happening moment-by-moment can pull back the heavy curtain of trance-like inattention that is the default state for many. Less ancient practices to see behind curtains include reading and otherwise learning about psychology, philosophy and many other fields. Reading novels that have penetrating insights into human nature, cutting-edge satire and journalism, visionary art (Alex Grey), movies (David Lynch) and many other cultural products can powerfully assist us in finding out what is happening beneath the often-deceptive surfaces of our world.

Consider this a propitious time to pull back the curtain and get the revelations you need.

For those with time to read more, consider the text of the highly related card, “Projection World”:

Perception so often tricks us into seeing our inner contents out in the world. The world so easily becomes our projection screen, a globe of a thousand mirrors reflecting back to us fragments of our fragmented selves. Most violence, physical, psychological, environmental, is done in a state of projection.

Imagine the following thought experiment. You enter a crypt filled with pirate treasure. The crypt is absolutely dark. You have a flashlight with you and switch it on. You gasp as the flashlight beam illuminates red rubies, glittering gold coins, green emeralds and cobalt blue sapphires. What beautiful colors these precious objects have!

Actually, this is the illusion of projection. These objects have no color, no light energy. The light, color and energy you perceive are mere reflections and refractions of the white light of the flashlight which contains all colors. Freud noticed something similar about the sexuality of the modern person as compared to the “primitive.” The primitive worshiped the mysterious inner fire, and the object onto whom this might be bestowed was secondary. The modern person conversely sees all the magic and fire in the outside object (in another words, the Hottie) and fails to recognize the mystery and power of their inner fire. Some guy sees Britney on television and says, “She’s so hot!” Actually, she’s an odorless, touchless, two-inch pixel phantom moving beneath a glass screen. What’s hot is his inner fire, the power that he forever gives away to the image, fantasy or person of the Hottie.

So many perceptions of things going on in the world, and especially with other people, are projections of our inner contents. Consider this a propitious time to reclaim some of your projections, some of your own light splintered into the colored fragments glittering in the outer world. When you recognize yourself as the source of your own projections, you take a giant step toward being an empowered magician.

For more on projection and pulling back the curtain see:

For more on projection and pulling back the curtain see: