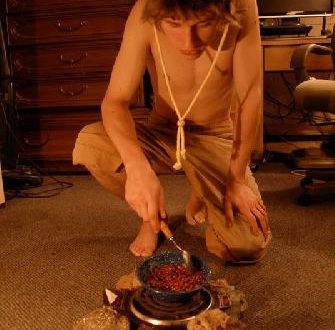 Card #436 – Adapting to Life in the Babylon Matrix

Many people don’t feel entirely comfortable with the present era. Some long for a simpler, greener realm or otherwise feel out place in the Babylon Matrix. In A Splinter in your Mind I wrote,

“We also have a part of our intuition that registers a general wrongness about this world. Hamlet says, “This time is out of joint,” and, “Something is rotten in the state of Denmark.” Some of the most memorable spoken lines of our era are from the first Matrix movie, “There is a splinter in your mind you can’t get out.” and “It is the world that has been pulled over your eyes to blind you from the truth.” The Matrix and Tolkien’s mythology share a belief with the ancient Gnostics that the realm we have incarnated in is largely a diabolical deception or intrinsically corrupted plane. Tolkien wrote in his notes, “But nothing, as has been said, utterly avoids the Shadow upon Arda (earth) or is wholly unmarred, so as to proceed unhindered upon its right courses.”

In a letter Tolkien wrote, “But certainly there was an Eden on this very unhappy earth. We all long for it, and we are constantly glimpsing it: our whole nature at its best and least corrupted, its gentlest and most humane, is still soaked with the sense of exile.” When we perceive the darkness of this realm, we are not always altogether filled with despair, because we have both past and future memories of another plane of reality. As a character in a fallen world in Stephen King’s Dark Tower series says before falling into an abyss, “Go then, there are other worlds than these.”

Users of this oracle tend to be mutants, round pegs, and a major life issue is the Babylon Matrix as a toxic landscape of square holes. For the introverted mutant, the Babylon Matrix makes obnoxious and overwhelming demands on our time and attention. You reach out toward the form of magic the BM presents you with, high-tech gadgets, and often find yourself immersed in frustrating minutiae — huge instruction manuals, tech support issues, etc. To obtain crucial resources you need to survive requires token counters called “money,” and to obtain this money you may need to spend vast amounts of your time and energy laboring in a square hole of some sort. The talents that derive from your essence, and the pursuits that are intrinsically connected to your great work, are often unrecognized and undervalued by the BM, while it would celebrate you as a “success” if you were really good at chucking a football or managing a stock portfolio.

The most classic way to adapt to square-hole predicament is to enter the victim reality tunnel. Evidence to support the victimized worldview will be incredibly easy to find. Complaining, one of the main recreations of the victim timeline, will be supported by an endless cascade of complaint-worthy situations, objects, people and events. On this path you will play out many dissociative strategies, such as addictions, in your pursuit of the victim nirvana of being comfortably numb.

Another way to adapt to the the square hole predicament is denial. For example, you can enter the reality tunnel of the positivity Nazis, who believe that they create their own reality and that through “the secret” and the power of positive thinking they can change every sow’s ear into a silk purse. (For a more serious critique of “you create your own reality” absolutism, see Dynamic Paradoxicalism — the anti ism ism)

Much of the content of this website is an attempt to define and express the ways of adapting to life in the Babylon Matrix that work for me. In Mechanical Resistance Matrix I present a Warrior stance for dealing with a square-holed realm. A Warrior with a capital “W” is not a mercenary, but someone who seeks to efficiently serve transpersonal aims. The transpersonal aims should be in accord with your True Will and your Great Work, the stuff that you came here to do and that you will remember well on your deathbed. See also other writings in the warrior section of this site. For a philosophy and practical advice on how to fulfill your great work see The Path of the Numinous — Living and Working with the Creative Muse . The warrior path does not mean a grim struggle against overwhelming odds, a square-holes-suck-and-then-you-die timeline. In order not to fall into such depressive worldviews it is crucial to recognize that you are an interdimensional traveler and that the Babylon Matrix is not the only realm you travel through — see A Guide to the Perplexed Interdimensional Traveler. If scarcity of money or other resources seems like the dominant thing you are struggling to adapt to see Resource Fluctuations Happen — Working with Scarcity and Abundance

“Always remember that there are timelines in the affairs of a mutant which, entered when portals open, lead on to fortune, omitted and all the voyage of our incarnation is bound in shallows and in miseries. And oh how can one ever tell how rich the Babylon Matrix is in shallows and in miseries! Intricate networks of stagnant, toxic rivulets seeping into florescent cubicles, scheduled incarnations set to run by clock and currency, the folk that seem to dwindle with every nervous step, hungry ghosts hurrying, then hobbling, on the path of winding down. In such a darkly trending part of the multiverse are we now afloat, and we must seize the portals when they open, or lose the timelines of sparkly green fire which lead us to other worlds than these.”

“There are other paths than those of shallow misery, but they are easier to see when you realize the Babylon Matrix is only one of a multiverse of dreams. But what a noisy, bustling, buzzing, in-your-face sort of a dream it is, the dream of a Cyclops with one blinded eye careening drunkenly down the darkened skull-shadowed avenues of history while headlines blare ‘This dream is an emergency! Grasp it with white knuckles!”

“As the racecar drivers say, don’t look at the wall if you are heading toward it, look at where you want to go, and where I want to go is through those shimmering planes of improbable coincidence, through the interstices of the web, sparkling constellations of thought forms and images encoded as zeros and ones, indeterminate autonomous zones where fellow mutants disassociate from Babylon Matrix, shape-shift and shimmer iridescently with possibilities. I seek to follow time lines less traveled by, but where there are promises to keep, and many paths and errands meet, and I avoid the timelines of white powders which may seem lovely, dark and deep, but are where withering souls go to creep.”