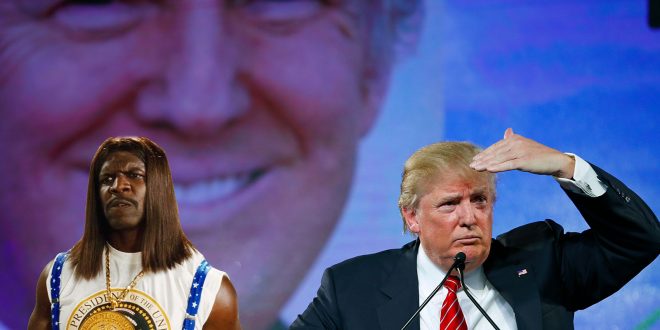 Breaking News: RNC to Dump Trump-Pence in favor of a Camacho-Smith Ticket In a bold move sure to stir controversy, RNC chairman, Reince Preibus, announced today that the Republican Party is going to officially dump the Trump-Pence ticket. “I like Donald Trump,” said Preibus at the packed Washington D.C. press conference, “and he has already done a lot to make America great again, but let’s face it, he’s like the Galaxy Note 7, a great device packed with advanced features.  I was able to ignore the first few dozen explosions and fires it caused, but after a certain point, even an anti-regulation and pro-business party has got to agree to a recall. It’s time to get back to our roots. Our greatest president, Ronald Reagan was a movie star, not a reality television star, and our new winning ticket provides you with not just one, but two movie stars.

“At the head of our ticket is not just any movie star, but one who successfully  played the president of the United States of America in the movies. Please give it up for the next president of the United States, Dwayne Elizondo Mountain Dew Herbert Camacho! This is a man who deeply understands the image of the presidency necessary to make America even greater again!”

At that point, Camacho joined Priebus on the stage. He offered no comments, but in a gesture of Second Amendment solidarity with the Republican base he raised a  giant M-240 machine gun into the air and fired off a thunderous round of heavy-caliber bullets. “Booyah!”said Chairman Preibus, who was now covered in plaster dust that had fallen from the ceiling following Camacho’s automatic weapons fire. “And now, backing up Camacho, a  Vice President who will have a portfolio of responsibilities even larger than Dick Cheney’s, including all domestic and foreign affairs, please give it up for the star of the Matrix films, Agent Smith!”

Agent Smith, wearing his trademark sunglasses, dark suit and stern expression joined Preibus on the stage. Reading from prepared remarks, Agent Smith, speaking in his characteristic slow and over-enunciated cadence, thanked Preibus for his selection and remarked, “The American people know that there are two lives that lie before them. One life clings to the past with an excessive preoccupation with civil liberties, freedom of expression and individuality. The other life involves boldly striding forward into a technologically-advanced Twenty-First Century. One of these lives has a future, the other one does not.” Preibus added, “To bring greater consistency to the new administration and reduce security leaks, Agent Smith has generously offered to employ cloned copies of himself to head all cabinets posts.” Several Agent Smith clones joined them on the stage before Preibus continued,  “Finally, last, but certainly not least, our former nominee, a great businessman who offered his resignation in exchange for heading up a brand new government department that will make America even greater again, please  join me in giving it up for the one, the only, Donald Trump, who will join the Camacho-Smith administration as head of our new department of Women’s Affairs—” “Or affairs with the women as I like to think of it,” said Donald Trump, winking at the audience as he interrupted Preibus and strode confidently to the podium. “Look, I know some of you think I’ve taken advantage of the women. That makes me smart. I’ve been able to take advantage of the women because I understand them better than anyone else, and this is why I am the only one who can fix them! And believe me, they need fixing! No one respects women more than I do, but believe me folks, right now these women are a TOTAL DISASTER. Look, I married a 10, and my daughter Ivanka is a super-hot 10, but  let’s face it folks, most of the women in this  country aren’t even 5s. Most of them are loud, bossy and fat, really fat, and it’s a TOTAL DISASTER. I have the greatest respect for women, but you know as well as I do that most of them are fat eating machines. It’s disgusting. I don’t even want to think about it. Yesterday I had a long meeting with Agent Smith who has the biotechnology code writing skills to reprogram our women into 9s and 10s, and that’s why I made the decision to once again sacrifice my personal ambitions to make America even greater again and to join forces with Agent Smith to defeat Crooked Hillary and her rapist husband once and for all!”

Preibus and the RNC’s selection of  Camacho and Agent Smith as running mates is part of a burgeoning trend of popular celebrities entering politics. Opponents of the RNC, such as New York Democratic Senator Charles Schumer, immediately criticized the new ticket. “I see a huge conflict of interest here,” said Schumer at an impromptu news conference, “it is well known that Agent Smith has close ties to the Zero-One Corporation and the Matrix which are known to have an agenda of global domination of the human race and employ deceptive holographic simulations to keep human beings under the control of a giant computer network.”

A spokesperson for the RNC dismissed the criticism as irrelevant and partisan, “This is a typical example of Democrats playing divisive partisan politics in an election year. The American people are smarter than that. It should be obvious to anyone who saw Matrix Revolution that Agent Smith has become increasingly independent of the Matrix. Governor Schwarzenegger is well known to have connections to Skynet, a rival computer network seeking domination of the planet, but that has not kept him from serving with distinction as Governor of California,” said the RNC  spokesperson.

Go here http://realitysandwich.com/320797/docudrama-on-trumps-early-years-provides-cautionary-insights/ and follow the link at end of that article for complete coverage of the 2016 election by Jonathan Zap