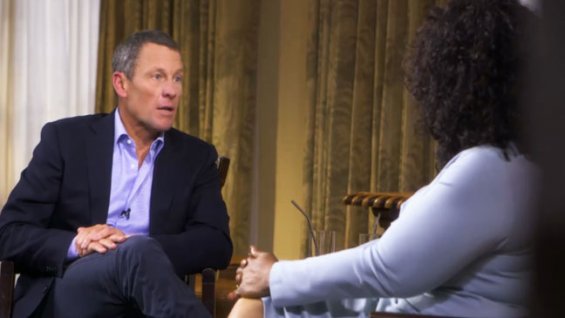 (A review of the Lance Armstrong/Oprah Winfrey interview. Watch excerpts on the: OWN network website)

There are liars, damned liars and then there is Lance Armstrong, who was, literally, a liar on steroids. Lance was a brazen, defiant, bullying and litigious liar. For example, here’s what he said in his victory speech on the podium after his seventh and last Tour de France win,

Lance was an abusive, destructive liar who called one of his whistleblowers “crazy” and a “bitch” and implied that another one was a whore. He threatened several of them with extreme physical violence, sued them, and wrecked their careers, reputations and finances. He wasn’t just abusive to those who called him out on his lies; he was apparently abusive toward everyone, even waiters.

Lance’s ruthless manipulation of others and facility with lying would no doubt earn him a far above average score on Hare’s psychopathy checklist. (see: Foxes and Reptiles, Psychopathy and the Financial Meltdown for more on psychopaths and their devastating impact on society). An even stronger case could be made for narcissistic personality disorder, the diagnosis that’s been applied to the ever-abusive Steve Jobs. But these labels are just the “industrialized form of story telling” as my writing mentor, E.L. Doctorow, once put it. It may be more appropriate to say that he has very bad character.

Jung, who believed that a person’s name was sometimes synchronistic, might have predicted that someone named Lance Armstrong would be someone imbued with warrior essence and single pointed focus. Lance certainly embodied unbending intent, and his concentration near the end of races looked positively reptilian, like a cobra about to strike. To be a warrior with a capital “W,” however, one needs to serve transpersonal aims, and Lance’s work on behalf of his Livestrong Foundation made that appear to be the case. By the time of the Oprah interviews, however, it’s become obvious that Lance’s aim was to win at any cost, especially at any cost to others. Unbending intent is a talent, but not necessarily a virtue.

There is an irony in Lance’s choice of Oprah as his confessor. Oprah, as exhaustively documented in the Kitty Kelly biography, was a serial liar herself who largely fabricated her childhood Cinderella story to craft herself as a mythological figure. Lance and Oprah are highly talented people, with tremendous will to power, and both can be bullies. Oprah, who is so expert at drawing out the confessions of others, has every one who works for her sign some of the toughest nondisclosure agreements ever written.

In the interview, Lance, despite all the coaching he no doubt received, still comes across as focused on winning his redemption at any cost. With his craftily simulated sincerity and legalistically parsed sentences, Lance reminded me at times of a skinnier version of Bill Clinton. There were admissions, half lies, and straight up lies, according to people who really know his case. For example, he still asserts that he did not dope during the two years of his comeback, but that may be because those races are still within the statue of limitations. Although he tells Oprah, at one point, that he is “a better person without a doubt” for having been caught, at another point he says that if it weren’t for his comeback, “We wouldn’t be sitting here today.” In other words, what he really regrets is getting caught, and he would gladly trade being a better person for being a celebrated winner.

A cartoon I once saw (probably in The New Yorker) depicts two businessmen walking together, each carrying a briefcase. ‘We’re only morally bankrupt,’ says one. ‘Thank God,’ says the other. Lance Armstrong, who has had his titles stripped from him, faces an avalanche of lawsuits, and is barred for life from competition. He seems like a man who can no longer be thankful for being only morally bankrupt. Now he must live with his deep regret at getting caught.