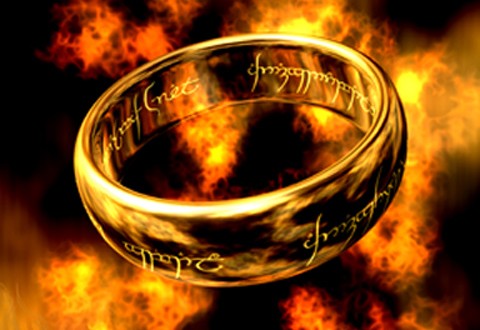 Wielding the One Ring

When I put on the gold ring, my Precious, I know I am The One, and all the hotties can feel my power, feel my power like heat ripples coming off of me and they know that I can rock their world and they stare at me with glazed eyes mesmerized and infatuated with my power as Michael Jordan comes up around me in slow motion trying to do a lay up and I spike the ball right out of his hands and when I land, I am dancing, circling around the ring, a genetically enhanced version of Muhammad Ali in his prime, and I am floating around the ring, floating like a butterfly, stinging like a bee, and I’ve slowed time down as I dance around the ring, my awareness and speed heightened so that my movements can flicker like lightening, and I am dancing circles around Mike Tyson, Iron Mike, Mike of the Iron Age, who is there in his prime and at the peak of his orc-like obnoxiousness, and everyone knows he wants to bite my ears off, wants to eat my children, wants to feed on man flash tonight as I dance, dance around him out of reach, the lethal grace of a big cat, amused and alert, and Iron Mike can only glare at me, orc-like, but to me he is just a dense and rubbery thing, an armless latex martial arts dummy on a weighted stand, a bowling pin waiting for a depleted uranium bowling ball to be shot out of an 80 millimeter super canon at mach 7, and I just circle dancing, a thousand arc lights reflecting off the shimmering curvilinear planes of my muscle definition, muscle definition that makes anatomy charts seem flabby by comparison, and occasionally, just to amuse the crowd, I sting Iron Mike with a flickering jab, sting just hard enough to raise big red welts on his face, and he begins to look like a chocolatey version (with raspberry highlights) of the Pillsbury Dough Boy trying to fight a phase 9 Terminator with gamma enhanced nuclear magnetic resonance circuitry capable of power surges in the trillions of volts, but I hold the power back and just keep dancing, dancing circles around him until I sense that every ringside photographer has a sweating finger pressed on shutter button ready to fire, and the strobe flashes go off all around me as I deliver the knockout blow, the G-force making Iron Mike’s face flatten into flabby accordion ripples before he drops to the canvas like a sack of wet rubber coated iron pellets while I lean out of the balcony of my Death Star drinking ever darker cups of espresso, the earth a glittering ball beneath my feet, and when people give me shit I find their lack of faith disturbing and I cut off their oxygen supply and when I do that little hand gesture, that little hand gesture has nothing to do with how I use The Force, which requires only my will, I make that little hand gesture to show how small they are compared to me, and when I employ breath masks and body armor it isn’t that black plasticy looking crap, its the polished gunmetal black of an adamantine metal so powerful and impervious that when some rebel tries to detonate a one thousand kiloton nuclear projectile right in my face it only raises the temperature inside my body armor by about one degree centigrade, which the climate control system adjusts for in nanoseconds anyway, and would I be willing to share my Galactic Empire with a twinkie like Luke Skywalker? Yeah, right, dream on Lukey-Luke, believe that and I’ve got a slightly damaged death star I can sell you at a huge discount…