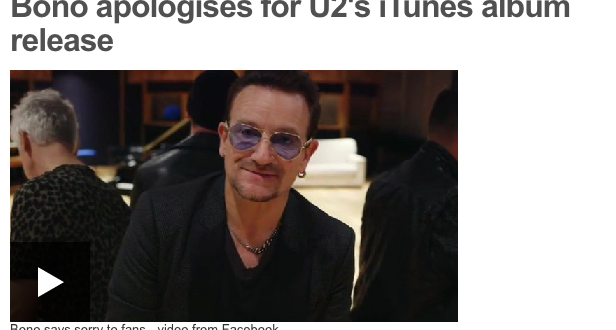 Too Much Info Bro – Even if You are a Superstar, Giving Away Too Much of Yourself Can be Humiliating

Social media poses temptations to disclose too much to people in general, but even private messages and conversations with friends can also be cases of “meeting more than halfway” as the I Ching  puts it. As a narcissist with obsessive interests, and sometimes obsessive interest in certain people, I’ve been learning my own lessons about this. A close friend of mine (but who does not always share my degree of obsessive interests) very diplomatically reminded me that he is careful about imposing himself on the time and attention of others who may have “more important stuff to do than to listen to all my great ideas.” I agreed, and told him I should probably have his statement tattooed on the back of my hands as a reminder. Just last night it was international news that U2’s Bono had to publicly apologize for the free automatic iTunes download of their last album, which many complained about.  Even though he’s an actual rock star, and even though come of the songs on that album I found to be some of their best work and brilliant, U2 humiliated themselves by meeting more than halfway and sending out their creative work unsolicited to millions of people.
The lesson is, even if you are an actual rock super star, and even if you have just done your best work, and even if you are giving it away for free, other people may have better things to do with their time than to listen to what you think is your greatest work, most fascinating secrets, confessions and so forth. What the I Ching/Carol Anthony advises is that even in the course of a live, mutual conversation you should monitor the other’s level of interest, the minutiae of their openings and closings revealed by changes in eye contact and body language, so you know when to advance and went to back off. If in doubt, the I Ching advises reticence (holding back). This reticence is recommended to people from the East. Western egos are far more likely to plunge ahead with too much disclosure and some will do it publicly, revealing their deepest secrets on Oprah’s couch, etc. While it is easy to see the toxic potential of public disclosure, it can also compromise inner dignity, and depotentiate inner work, if we one-sidedly disclose too much to an individual friend who we feel is on our wavelength. The other may be preoccupied with their own obsessions and resent the imposition of ours. I’m in no position to criticize anyone else for this as I’ve been guilty of this more times than I care to remember.
A problem with social media, email, texting, etc. is that there is no body language to read and it is all too easy, as I have often found out, to impose on the attention of the other without realizing it, and this only creates resistance in them and compromises our inner dignity. Even with live feedback it is easy to make this mistake (and I have). The I Ching advises that we err on the side of reticence. “A master first reveals himself in his ability to hold back.” —Goethe
Post Views: 2,222