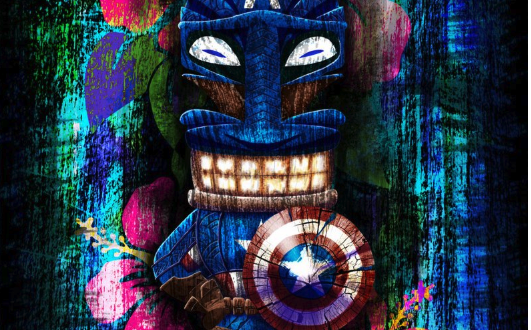 Yesterday, upon the stair;

I saw a little man who wasn’t there!

Oh how I wish he’d go away!

When I came home last night at three

The man was waiting there for me

But when I looked around the hall

I couldn’t see him there at all!

Still I heard his footsteps fall—-

As he passed right through a bolted oaken Tikiverse door!

For said Tikiverse is still unformed,

And hyper-dimensional self-transforming machine-elf Tikularities Tikibrating with far-from-equilibrium dissipative atropic dynamisms and other such recursively Tikitabulating Nuclear-Magnetic Disequalbriums far too polychromatic and chaotic and speckled with spiraling wormholes and vortices of destabilizing Tiki fracticalities and all the metamorphosing, ideoplastic, rabbit-holed and quantumly-entangled enigmatic and slippery labyrinths ever-riddling any such still-embryonic Tikiverse inevitably making it far too treacherous a place for me to seek after such a little man who wasn’t there!

So I will bide my time and await,

For fully-formed Tikiverses are lovely, dark and deep

But not the sort of place where such a withering soul might creep,

And I have promises to keep,

And the stabilizing of embryonic Tiki-metamorphosis is not too temporally steep,

And we all know that Thanos is already dead meat,

And all through the house

No evil creature will be stirring

No Indeterminate Persons or Non-Persons were harmed during this production.