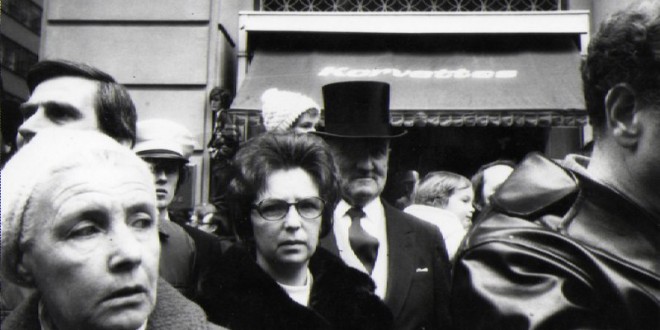 This was from one of the first rolls of film I ever exposed (when I was about twelve or thirteen) -- people watching the Macy's Day Parade in Manhattan in the early Seventies. This same image is shared by three cards: "Face in the Crowd", "The Other Stars", and "Every Man and Woman a Star"

This was from one of the first rolls of film I ever exposed (when I was about twelve or thirteen) — people watching the Macy’s Day Parade in Manhattan in the early Seventies.

“Every man and woman a star.”

It is all too easy to become the star of your movie and to forget that others are the stars of their movies. The same event may look very different in the context of your movie than it does in the movie of another star. We all too easily forget to respect the otherness of the other, and expect stars to play the roles we have assigned to them. We want others to live inside of our movie, and when they act from their own movies we point the finger of blame at them for being different than we imagined. To us, it seems obvious that they would be much better off playing the lovely supporting roles we assigned for them. We are easily offended when others go renegade, step off of our script and begin extemporizing their own roles.

It is flattering to recognize yourself as a star, but it is more humbling than many of us can take to recognize that others are also stars. Stars vary greatly in size, brightness and where they are in their lifecycle. It is important to recognize that each star is unique and the variations can be dramatic. It is also crucial to recognize that despite the differences, other stars are cosmic bodies of the same order of magnitude that you are. Each star has its own trajectory and inertia. Although we may constellate with other stars, each of us has an independent nuclear core.

When it comes to the other star, our information is woefully incomplete. Usually, even if we live under the same roof, we haven’t been there for most of the other star’s movie. Since we’ve missed most of the other’s screen time, inevitably there are secrets about their movie that we don’t know. The other also has secrets about their movie that they don’t know. We must respect both types of secrets.

Even with our eyes fairly open, we are blind to much of the core identity of the other star. Relating to another star can be like entering a foreign movie where there are no subtitles. Interpenetrating with the other’s movie, we find ourselves in a misty, foreign culture where traditions and perceptions are quite different. We may do something that has benign intentions from inside our movie, but when it shows up in their movie it appears as something highly offensive. Inevitably, there will be gaffes, moments when we say or do exactly the wrong thing in another star’s movie. Similarly, we find that other stars may often say or do exactly the wrong thing from within our movie. When dealing with a different culture, wide allowances must be made for differences in custom and perception.

It is not necessarily a bad thing that I have my own movie. I need to live by my own mythology and vision and life philosophy. But I must also respect that other stars have their movies based on their individualized mythologies, visions and life philosophies. The feelings of the other stars are as real as my feelings. I must live from my own movie, but also be able to peer outside of it and recognize that flickering all around me are the movies of other stars.

If I project my movie into the movie of another star, a third distorted movie is created with a confused melange of images imperfectly superimposed on other images. What I must do, and gently encourage others stars to do, is to project our movies in parallel. When two movies are projected in parallel with graceful precision, they may coalesce for a time into a dynamic third movie that unfolds and develops, enlivened by the extemporaneous collaboration of parallel stars.