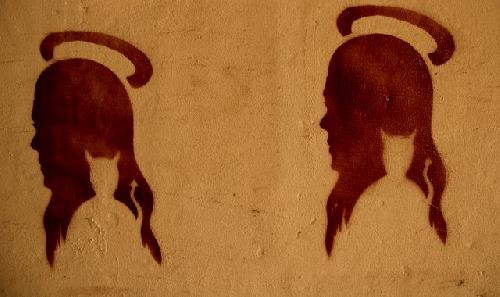 photo: stenciled graffiti I found in an underpass in Boulder, Colorado Image for Zap Oracle card #423 Light and Dark are Interrelated Elements

Take a quick three question quiz to test your sense of the condition of the world:

1. What is the average life expectancy wordwide?

2. What % of the world’s adults are literate?

3. What % if the world’s one-year old children have been vaccinated for measles?

According to CNN’s Fareed Zakaria, who reported on this, Americans score significantly lower than chance (which would indicate an average of 1 in 3 correct).

One reason may be that we are biased toward seeing the world as worse off than it actually is. Despite the horrible situation in Syria, we currently have the lowest per capita war death rate in thousands of years. The current U.S. homicide rate may be at the lowest point in the nation’s history. We are feeding more people than ever before, etc.  Part of the bias may be neurological: It was an evolutionary adaptation to amplify the perception of hazards over rewards.  Some of the most biased people, in my experience, are those under the sway of the sway of the conspiracy worldview.  (see Problems with the Conspiratist World View   http://www.zaporacle.com/problems-with-the-conspiratist-world-view)  Canceled elections, martial law, UN troops confiscating our guns, FEMA camps to incarcerate everyone who resists the New World Order, chip implants and the Amerio are always said to be just around the corner.  Since I was a child in the 1960s I have always heard people saying, “the world is going to hell in a hand basket” and conjecturing on which worldwide conspiracy was to blame. On my dad’s bookshelf I found a dusty copy of a runaway bestseller in the 1970s entitled The Crash of 79.

Next to it was an ominous looking volume, also a best seller, entitled, The Coming Currency Collapse,  which was published in 1981. Although the world is full of conspiracies, psychopaths and dark deeds, it is important to have light and dark in some sort of reasonable perspective so that you are neither a Pollyanna nor a paranoid. Post modernist culture views any art that isn’t dark (such as a movie or novel with a happy ending) as naive or crassly commercial. A dark view of human affairs is considered the only sophisticated point of view. As the light principle expands (since we just passed the solstice) take a few moments to consider whether you are part of the popular bias toward a dark view of the world. My friend Rob Brezsny is the most poetic and visionary voice trying to expose this harmful bias. See my review of his work:  Is the World Spiraling Toward Eucastrophe or is that just my Pronoia?