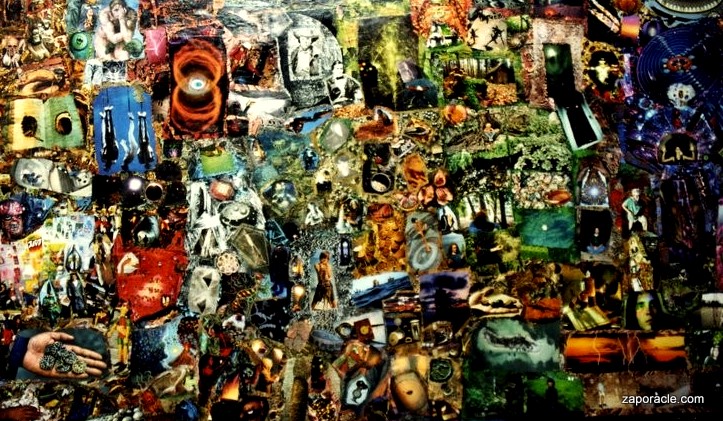 The heart has two phases, contraction and expansion, systole and diastole. Mammal incarnation has two phases it cycles through on a daily basis — waking and dreaming. We are interdimensional travelers, arriving from another dimension at birth, departing to other dimensions at death. The cycle of the day recapitulates the cycle of a life. At night/old age we run out of energy, grow sleepy, and eventually surrender to the temporary oblivion of sleep/death. Sleep/death is not an eternity of velvet darkness; the velvet darkness is polka-dotted with shimmering portals — incarnations/dreams. The dreamtime is our other daily dimension, and it is ruled by a different physics than the physics of our waking dimension. The relentless and ubiquitous tyrant gravity does not bind us, and if we realize that we are able to fly and translocate at will. Linear time does not bind us, and past, present and future fold together in wavy patterns like Damascus steel;. In the dreamtime, synchronicity is the rule rather than the seeming exception. The Tao of the dream usually unfolds in parallel to inner psychic content. An unproven assumption is that we generate our own dreams. But the dreams of people who are dull and unimaginative in the waking life, often have the surreal double and triple entendre complexity of the dreams of the most imaginative, as if they were all directed by David Lynch. And who is the dream generator in the many documented cases of mutual dreaming?

Dream theories are at least as unreliable as life theories. Sometimes, however, they may identify one of many possible functions that a dream can serve. Nightmares often seem to have a healing function that has much in common with the way homeopathic medicine works. If you have a lung infection, for example, the homeopath will give you a very dilute poison that attacks the lungs. There is a paradoxical mechanism at work here—-the poison hopefully stimulates an immunological response that will overtake both poison and infection. Similarly, nightmares often seem to contain a homeopathic poison designed to stimulate a psychic immunological response that can ultimately create psychological/spiritual healing. For example, several times I have had people bring me almost the identical nightmare. They are hanging out a bar or a party and suddenly all the people around them turn into vampires. When questioned about their feelings surrounding the dream, the dreamer volunteers that they have a tendency to be self-destructively promiscuous. The nightmare reconditions this toxic habit so that when they are next in such a social setting they are much more appropriately wary and feel a nauseous gut response when some random stranger tries to pick them up.