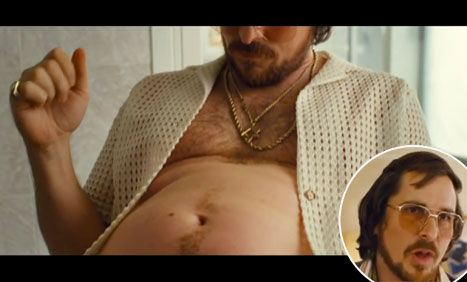 See American Hustle but not The Wolf of Wall Street

photo: Christian Bale as Melvin Weinberg in American Hustle and, no, that’s not a prosthetic belly

Martin Scorsese may know more about films than any man alive, but somehow he missed something incredibly obvious about his new movie, The Wolf of Wall Street. Scorsese, Dicaprio and others who worked on this film intended to lay bare the corrupt and hedonistic excesses of Wall Street predators, but end up glamorizing and glorifying them. Here’s a good rule of thumb: If you want your protagonist to be emblematic of greed, corruption, a soul-destroying lifestyle and a financial system that destroys lives and perpetuates vast economic injustice, don’t cast Leonardo Dicaprio in the role.  Don’t indulge scenes of hilarious sex-and-drugs antics so that, in effect, you create a wild and crazy guys having a Fear and Loathing in Wall Street romp through the lifestyles of the rich and famous.  If your intent is to discourage corruption, this is as dumb as creating a giant billboard that says, “Hey Kids, Don’t Smoke Cigarettes” and then decorating your billboard with neon-colored gumdrops and Transformers and Marvel Avengers smoking cigarettes in the background. In the late Sixties, Soviet propagandists showed newsreels of Americans rioting to their citizens to show how corrupt capitalist society was. But when they interviewed people who saw the newsreel, what the viewers noticed was how cool the clothing of the rioters looked. When young guys in college see this film, the kind of guys who might be the next Wall Street recruits, are they going to walk out saying, “Wow, I never realized how corrupt and corrosive of moral values Wall Street is”? For three hours they’ve had the following wires sparking together in their brains: sex with hotties, piles of cash, white Ferraris, gold Rolexes, lines of coke, blow out parties with hilarious sex and drug antics, charismatic cool guy con artist who gets over on people and lands on his feet. You’ve just taken your supposed public service message about Wall Street corruption and coated it with candy, coke, cash, gold, diamonds, tits and pussy. In  the film itself there is a lesson on why films like this don’t work. Forbes does an article on Belford with the eponymous title, “The Wolf of Wall Street” that slams Belfort and the corrupt practices of his company. (The actual 1991 Forbes article is entitled “Steaks, Stocks—What’s the Difference?“) Belfort/Dicaprio, is upset about the article, and  fears that his image has been damaged, but his wife tells him he looks good in the photo of him and when he returns to the office he’s besieged by a whole crowd of young guys begging to work for him. Get it Scorsese? You just did the same thing as the Forbes article—a hundred million dollar recruitment campaign to bring more sociopathic assholes to Wall Street. Here’s a heartfelt reaction to what you did from one of the victims of Jordan Belfort (the real life asshole sexed up by Scorcese/Dicaprio). She’s the daughter of one of Belfort’s sociopathic colleagues. An Open Letter to the Makers of The Wolf of Wall Street, and the Wolf Himself

To understand why this movie, which does have snazzy Scorcesian cinematic moments and a great performance by Jonah Hill, is going to increase the psychopathic nature of Wall Street see my psychological study of toxic capitalism: Foxes and Reptiles—Psychopathy and the Financial Meltdown

Also very unfortunate for The Wolf of Wall Street is that it opened at almost the same time as a much better film, American Hustle. Yeah, casting Christian Bale as a con man protagonist sounds a lot like Belfort/Dicaprio, but Bale thoroughly deglamorized his character. He put on more than forty pounds, has a horrible comb-over and toupee, etc.  His character is very, very loosely based on actual Abscam con artist Melvin Weinberg, a thoroughly unpleasant guy, and Bale does make him ultimately sympathetic, but in a very unglamorous way. He pops heart pills, not Quaaludes and no young guys are going to come out of this movie saying, “Damn, I want to be just like Melvin.”  It’s altogether a better film and an immersion into the psychological reality that tricksters always end up tricking themselves as their schemes spin out of control.