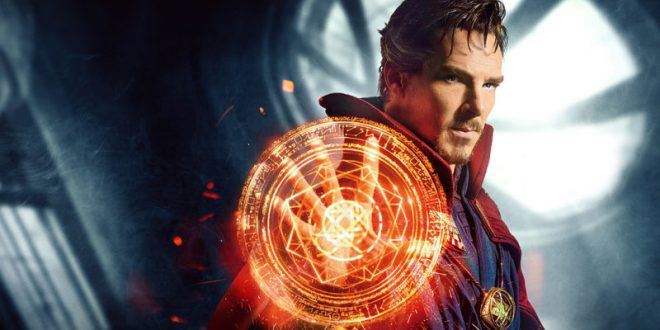 While Dr. Strange is probably the most interesting movie to come out of the Marvelverse, its strangeness is compromised by many all-too-familiar elements. (Plot spoilers follow.)

The first twenty minutes or so provide a brilliant premise. We are introduced to a character who is a glamorized ego ideal—a handsome young white guy who is a top-flight neurosurgeon with a beautiful girlfriend, an auto-winder draw full of Swiss watches in his to-die-for apartment and a snazzy super car. It seems like we are being introduced to a humorless version of Tony Stark, but just when that starts to get annoying comes the inciting incident, a spectacular car crash that leaves the surgeon’s hands maimed, and the glamorous ego humbled. Then the humbling takes on spiritual dimensions when he travels east and finds a master who attacks the arrogant assumptions of his scientism and belief in control. He is hurled into mind-blowing alternate universes to further shatter his ego. Soon he realizes that magical powers are real, and he wants to be empowered by them ASAP, but the master asks him what it took to become a great surgeon and, humbled, he replies,

“Years of practice and study.”

We’ve been carried along at break neck speed to this interesting premise, but now we will spend the rest of the film trashing it. A two-minute montage could have shown us that, indeed, matrix-shifting magical powers take at least as much work to develop as surgery skills, and this once proud ego will have to patiently submit to such training as per the premise just developed. But no, in a nonsensical sugar rush that makes Hogwarts seem like a sixteen-year course of study at Oxford, Dr. Strange becomes a master of multiverse shattering magic in a couple of days. Soon he can time-loop the shit out of an evil deity that threatens the multiverse.

Oh and there is also some sort of a weak villain who suffers from over-the-top, iridescent eye shadow and who once studied with the same master and that’s about all I could figure out about the main antagonist. Dr. Strange has gone from skeptical materialism to master of magic in about forty-eight hours but so long as he holds onto his special, two-finger signet ring he can magically kick the ass of the this potently evil wizard who has been studying the dark arts for centuries. And now we have to spend half the remaining film time learning again and again and again, through the mind-numbing cacophony of Marvel movie fight scenes—all CGI sound and fury signifying nothing—that despite his lack of training, shaky hands and supposedly shattered ego, Dr. Strange can use magical fisticuffs to kick the ass of any other magically endowed dark wizard or multiverse-dominating deity. Despite the shattering-of-the-heroic-ego premise, the theme that emerges to monotonously dominate the rest of the film is that Dr. Strange is a magically-endowed badass who can smugly defeat any force in the multiverse. What makes him such a powerful and instant master? It can’t be his slapdash training he so arrogantly manipulated. Oh wait, now I remember what sets him apart—he has a photographic memory! So does my phone and every other idiot savant. Apparently the real explanation of his indomitable power is that he is the leading man of a new Marvel franchise and is played by an expensive, square-jawed, hot British actor so of course Dr. Strange is, from a financial point of view, simply too big to fail. The Marvelverse needs to keep milking him for as many sequels and action figures as they possibly can . . . It’s his destiny . . .

As I watched, I became increasingly annoyed by the endless overblown and meaningless fight scenes where all story and character development comes to a complete halt so we can get Inception-on-steroids, architecture-folding CGI displays and what not. While so many low-budget dramatic films are able to deliver a feeling of actually living through something with characters we care about, at the end of Dr. Strange, as with other such films, there is no feeling of being immersed in story time, but merely of having been sugar rushed through a series of eye-candied fight scenes and unearned epiphanies.

Nevertheless, at some point I’d like to see those first twenty minutes or so again. The eye candy was first class. The ego-reality shattering visions were spectacular. But overall the effect was like throwing a few crumbs of DMT into a giant blender with a liter of Coca-Cola and a cardboard bucket of golden- sprayed movie theater popcorn.  The initial DMT-like visuals amazed, but then there was a loud Cola burp and blood sugar started to crash as I felt a congealed mass of golden-sprayed GMO corn decomposing in my gut as Dr. Familiar dropped Easter eggs into the credits to tempt me into the shallow rabbit hole of a profitable new franchise.