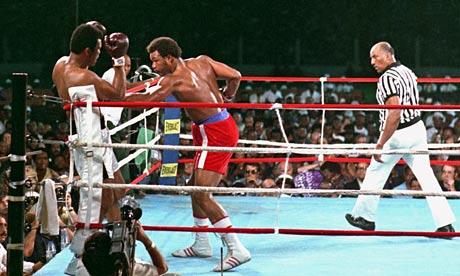 Ali rope-a-doping Foreman in the Rumble in the Jungle

Rope-a-Dope, a Classic Warrior Strategy that may have just Lessened the Odds of Trumpocalypse

Rope-a-dope is an effective, androgynously intelligent warrior strategy that can help you deal with all sorts of difficult life situations. In the first presidential debate between Trump and Clinton we have a perfect example of how rope-a-dope can be used to defeat a foolishly aggressive opponent.

But before I discuss how it played out in the debate, here is the text of Zap Oracle card #630, Rope-a-Dope :

“A master first reveals himself in his ability to hold back.” — Goethe

Rope-a-dope, the strategy that Muhammed Ali used to beat George Foreman in “The Rumble in the Jungle,” is a classic Warrior strategy that can be applied to many situations.

George Foreman, who was younger, bigger and stronger than Ali, and was the reigning heavyweight champion, was the heavy favorite to win their 1974 championship fight. Foreman was such a powerful puncher that, according to Norman Mailer, when he hit the heavy bag it looked like he was going to break it in half. Foreman had demolished the only two men who had ever beaten Ali, Joe Frazier and Ken Norton, both of whom lasted only two rounds. Foreman was such a powerful fighter that he was able to make a comeback after a decade-long retirement, and became the oldest man, at age forty-five, to ever become world heavyweight champion. Ali was considered by many to be over-the-hill, and some sports commentators worried aloud that he might actually be killed in the ring by Foreman.

Ali’s strategy was all about energy. It was about conserving his energy until just the right moment, while allowing his adversary to waste energy. Ali leaned back in the ropes taunting Foreman and allowing him to pummel him with wild punches while he covered up. In the extreme heat and humidity of Zaire, Foreman soon exhausted himself. By the eighth round Foreman was so spent that his punches lacked power and his defenses were greatly weakened. Ali pounced, and a devastating five-punch combination brought Foreman to the canvass and ignominious defeat.

Rope-a-dope became famous as a boxing strategy and was later used with great effect by boxers Manny Pacquiao and Nicolino Locche. Some have also generalized the strategy and applied it to any situation where you tempt a foolish, aggressive opponent to expose himself to danger. For example, recently in the news, political analysts have stated that Obama is trying to rope-a-dope the Republicans with the 2011 budget by letting them make the first moves on entitlements and other unpopular budget cuts.

This card suggests a greater generalization of the rope-a-dope strategy so that it can also be applied to situations where there is no human adversary, but an adversarial force that you cannot simply overpower. It is quite common, in almost any area of life, to find that your intentions are being blocked by seemingly inexorable forces. When forward progress is blocked by such a force, the common tendency is to punch yourself out in vain efforts to resist or break through the obstruction. This tendency puts us on the losing side of rope-a-dope. Let’s consider a hypothetical example: Max is a young man in his late twenties who has gone a few years without being able to find a romantic relationship with a woman. Feeling frustrated and desperate, he decides that he’s going to find a girlfriend in the next month no matter what. He starts answering every personal ad posted by a woman within twenty years of his age. He goes out on a series of unsatisfactory dates with women he has contacted through this process. All the women he meets are embarrassingly incompatible with what he wants, and he grows increasingly resentful and bitter. A couple of weeks after the month has passed, Max, still feeling exhausted by his month of romantic futility, meets, through his work, Sarah, a woman he feels deeply attracted to. Despite the fact that Sarah finds that they have much in common, she is turned off by something overwrought and needy about Max and rebuffs him.

In an alternate timeline Max’s life stance is informed by the rope-a-dope strategy. He recognizes that romance isn’t happening at the moment and that it’s not something you can make happen on a timetable. Instead, Max cheerfully makes progress at work and has deepening friendships with a number of his coworkers. He has a lot of pent-up energy which he sublimates into workouts at the gym. When Sarah shows up at his workplace she finds herself attracted to a cheerful, fit and confident Max who is on top of his game at work and popular with his coworkers. Instead of banging his head against a temporally closed door, Max bided his time and made progress in a number of open avenues of possibility. On the right side of rope-a-dope, when the door to romance opened he was energized and ready.

When we encounter powerful forces — obstructions, grievous absences, adversaries — that stand between us and what we want and/or need, we should avoid the temptation to punch ourselves out with futile resistance. To be on the right side of the rope-a-dope strategy, we allow a contrary force that is too strong for us to overpower to spend itself while we conserve our energy and move in the direction of open avenues of possibility.

An implied rope-a-dope life strategy can be found in the following quote by visionary genius WIlliam Blake (1757-1827):

“Fool they call me. I laugh at the goddess fortune for I know that she is the devil’s servant ready to kiss anyone’s ass. I labour upwards into futurity.”

Blake never got much recognition or income for his work while he was alive. He recognized that fortune was often irrespective of merit. We see this today, where celebrity and wealth are often bestowed on the unworthy. Instead of punching himself out trying to resist this aspect of fortune, Blake labored upward into futurity, moving toward the open avenues of possibility, relentlessly working on his poems, engravings, etc.

Consider this a propitious time to examine areas of your life where you face tenacious obstacles, grievous absences and adversaries. Which side of the rope-a-dope strategy do you want to be on?

The generalized rope-a-dope strategy is to avoid punching yourself out when you encounter obstructing forces you cannot overpower. Instead, bide your time, conserve your energy, and gracefully keep moving toward open avenues of possibility.

The first Trump/Clinton debate is a classic illustration of how to apply Rope-a-Dope. Yes, it would be great if this election took place in an alternate universe where candidates thoughtfully discussed key issues and our attention wasn’t dominated by vulgar power contests with an uniformed reality television star who more than earned his Politifact title of “liar of the year.” The debate was a power contest, far more than a discussion of issues and I’m going to analyze it from the power perspective.

Trump was his usual, hyper-aggressive self. He sought to dominate through volume of sound, quantity of words and various bullying tactics that worked well for him in the Republican primary debates.  He exemplified what William Butler Yeats prophecized in his apocalyptic poem, The Second Coming:

The best lack all conviction, while the worst

Are full of passionate intensity.

The passionate intensity of the gasoline and rag fire of Trump’s excess energy expenditure during the debate has been statistically analyzed by Bloomberg Politics and shows that Trump spoke a full 36% more than Clinton, interrupting and attacking far more often. Trump frequently and obnoxiously interrupted both Clinton and the impeccably restrained African-American moderator, Lester Holt. Clinton, who was obviously employing a prepared strategy, remained amiable, bemused and smiling, never resisting his frequent interruptions, some of which turned out to be disastrous admissions by Trump. For example, Clinton baited Trump about his refusal to release his tax returns: “Or maybe he doesn’t want the American people, all of you watching tonight, to know that he’s paid nothing in Federal Taxes.” Trump couldn’t even wait till she finished speaking before snapping his pouty lips onto the fish hook. He interrupted with, “That makes me smart,” a devastatingly, highly unsmart admission that he had indeed, not been paying Federal income tax. Clinton quickly utilized Trump’s foolish confession: “So if he paid zero, that means zero for troops, zero for vets, zero for schools or health.”

Lester Holt gave Trump a chance to recover by changing the subject to Clinton’s greatest vulnerability, the email scandal. Clinton responded with a succinct apology of under fifty words, a low energy response that minimized the target. A rattled Trump responded with a few sentences of attack on one of the technicians who set up Clinton’s server and took the fifth in front of Congress, then he foolishly dropped the subject to return attention to the bleeding wound Clinton had just exposed, “As far as my tax returns, you don’t learn much from tax returns. That I can tell you.”

I won’t go through the whole debate, pointing out all the cases where Trump exposed his poor temperament and got baited into foolish admissions, since you can find so much about that online, such as this perceptive article in the New Yorker: Hillary Clinton Brings Out the Real Donald Trump. While most debaters would resist and protest another debater trying to monopolize the time by talking longer, going over allotted time markers and continually interrupting, Clinton held back, and used Rope-a-Donald, letting Trump punch himself out and go on temperament exposing, rambling and incoherent tirades while she remained a smiling onlooker as though sharing with the audience the bemusing spectacle of  a toddler breaking its own toys during a tantrum. Every so often she would come off the ropes long enough to land a stinging jab and then lie back and enjoy the resulting Trumptantrum.

Clinton managed to bait Donald into damaging Trumptantrums spilling into the next day as reported by Politico:

Just as Rope-a-Donald may have slightly reduced the odds of Trumpocalypse, you can use rope-a-dope to improve your odds in many difficult situations.

See also: Can Post-Trumpocalytic Retrocausation Save Mankind?  which has links to my other Reality Sandwich articles on the 2016 election.  There is also a Warrior Stance section of Zap Oracle in which you can find articles and podcasts about other effective life strategies.