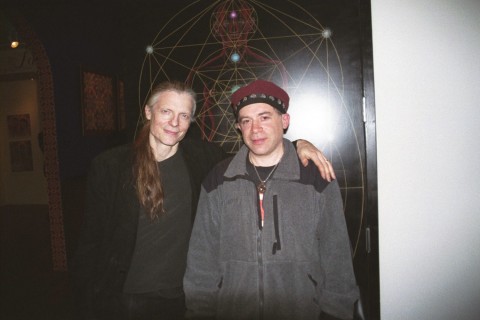 (with Alex Grey at Cosm in New York City)

Podcast of a Newly Expanded Alex Grey and the Mind Parasites

February 23, 2011 News Comments Off on Podcast of a Newly Expanded Alex Grey and the Mind Parasites 36,443 Views

Just expanded and revised Alex Grey and the Mind Parasites and also produced it as a podcast.  For whatever reasons this has long been one of my most popular documents. For example, since 1/10/11 it has had 1,001 readers.

(with Alex Grey at Cosm in New York City)

This document grew out of a conversation with Alex in 2005 and in this updated version adds some material that came out when Alex joined me for a half hour of a three hour interview with George Noory on Coast-to-Coast AM on the topic of mind parasites in 2006. Much of it consists of a visionary experience Alex had on LSD that led to his classic painting, Demons and Deities Drinking From the Milky Pool

Speaking of mind parasites,  if you want to see what a person hollowed out by mind parasites looks like, check out Mummar Ghaddafi:

I wrote about him in a Facebook status update this morning:

Many disturbing prison dreams last night, some from the POV of Arab political prisoners being utterly dehumanized. Ghadaffi is an insane monster I’ve hated since the 70s and he needs to be toppled now. It will be even sweeter to see the Persians rise up and take out the Iranian regime, but it is going to be bloody.

These are zero sum battles. Each side knows only one can win and momentum is crucial, once you’ve brought your revolution out onto the street you cannot afford to backdown. If you do, the regime starts picking off the revolutionaries one-by-one like in Iran where they are hanging people on an hourly basis right now. This is a surreal battle of new and old forms, Facebook vs. 7th Century style warlords. I want to see the evil patriarchs defriended, blocked and composted back into the zeros and ones of Babylon Matrix source code.

As always I would love to get your feedback about any of this.  Send to: [email protected]