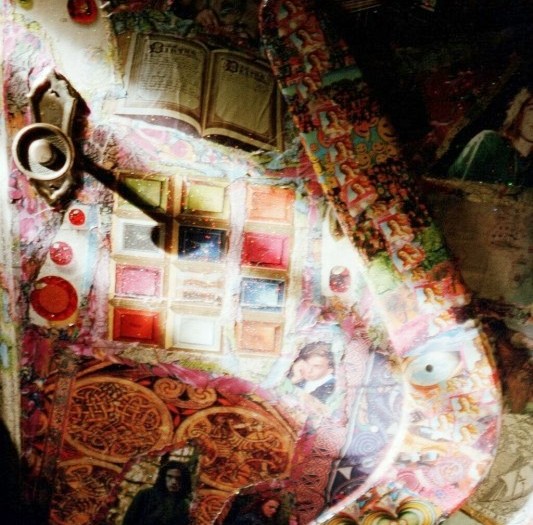 February 16, 2011 The Surreal Zone Comments Off on Parallel Worlds – Journey to the Lower Astral – A Role Playing Game 2,187 Views

Computer games are getting ever more VR like, games like Warcraft and Oblivion, and although I have never played such games myself, I have long wanted to design the underlying mythology for such elaborate games, and would be willing to do so for a modest, six figure fee. Meanwhile, the following game is one that you play yourself, supported by your own imaginal powers, while I provide an opening situation. As always, very interested in your feedback.

Parallel Worlds—-Journey to the Lower Astral A role-playing game

You step across a threshold, the floor is a mosaic of vari-colored tiles of polished granite and marble, the door is ornate brass, asymmetrically art nouveau with a baroque complexity of organic form. Now you are falling, falling through space, stars and galaxies changing orientation as you slowly somersault, like a derelict space craft, tumbling end over end. You hear a voice in your head, a voice of wisdom and compassion—your spirit guardian, and he/she tells you,

“Your body was taken from you very suddenly, the bomb was of a new type, it destroyed all the bodies in a very large area, and many spirits were released at once. Many of those spirits are in a very confused state, very disoriented, they are not sure what has happened to them, in many cases they are creating bardots for themselves, and those bardots may be shared by others, may pull others in, may pull you in if you are not wary, or if duty calls you to enter. We need you to journey into the realm of the lower astral, you who have left the body at the same moment as these others, you are the one who can help them, heal them, aid them with the battle of light and dark which continues for them in the lower astral plane, only intensified, the darkness intensified, the consequences as real as they ever were, souls found and lost, and some bardots have a great power of their own, a great ever-expanding hold on an ever-increasing number of souls—–what you would call a matrix, and the great path may be calling you to enter such matrices, to bring your light into the dark places and for purposes none of us can possibly anticipate.

In the lower astral realms you will be deeply affected by what you experience, and will be in states of struggle and peril where you will have to make life-changing choices, while much of what you want to know about the situation and consequences of actions lies hidden in shadows.

Are you ready to cross the threshold into the lower astral realms?”
(assuming you assent)

“Choose a form that appropriately represents your being and intentions in the lower astral realm. Please take a few moments, contemplate your intentions and seal them deep in you soul, for you must now cross the river of forgetfulness, shed you old identities, accept the reality of your new form, and the incarnation in the lower astral realms. When you are ready, step across the threshold.”

Up ahead of you is another ornate doorway, a variation on the theme of the last one, ornate, curvilinear, this doorway at the end of a corridor of rough hewn stone, just a few sconces hold flaming torches providing very subdued and flickering illumination. On the other side of the threshold are moving forms at the edge of comprehensibility, as if seen through a misted window. You approach, crossover…

It is night time, and you are curled in a fetal position in an alley of crumbled and strangely charred concrete, you are in a wasteland of a city, post thermonuclear, but you are unharmed, your body perfectly intact, you are dressed and have with you a few accoutrements and possessions. You have a talisman of your own design, a powerful tool, which could also be a weapon. You have a small shoulder bag, and in it are a few items of your own design, perhaps they are specialized tools, devices or weapons, or perhaps your intentions are such that you have only basic provisions with you, maybe you have nothing at all. You decide what you bring to the lower astral, but everything you bring, even if it is cloaked, or made to be disguised or deceptive, must obey a version of the doctrine of signatures—-it must be appropriate to your essence and intentions.

You are awakening on the concrete, your body still in fetal position, and so, for now, is your memory, you have all the general knowledge of you kind, but do not as yet know, and perhaps will never know in this incarnation, your past identity or experiences. You have crossed an event horizon, and your essence and intentions have been retained, and the tribal or collective knowledge of your kind have been retained or acquired, and these are all the resources that you bring into the lower astral realm.

You know only that something terrible has happened, that you are in a charred wasteland of a city. You know nothing else of your circumstances. There is everywhere, permeating the reality, the feeling of a great malignity and of fell powers. A full, silvery moon provides pale and shadowy illumination.

You walk for a while amidst the labyrinthine ruins, the twisted girders and charred concrete, hulking wrecks of industrial forms, partly melted, streaked by black soot. Coming around the side of a partly collapsed building you see someone you recognize deep within as a spiritual ally, someone you have chosen to journey with into the lower astral realms, someone on a parallel quest (the other player(s)). You spend some time acquainting yourself with your ally or allies and you share provisions to have a simple meal together. You journey on in the wasteland, sometimes you hear from a block or so away the echoing voice of a woman calling for a lost cat, her voice plaintive, haunting.

And now you step into a walled, concrete courtyard, almost a plaza of ruined concrete. There is a man standing by the entrance to the courtyard, he is an older man, pale, emaciated and he wears the striped uniform of a World War II concentration camp, his eyes are intense, intelligent, haunted—-a feeling of feverish and electrified will, and of a fierce determination rising from a depth of absolute desolation. He holds at his side a staff of dense metallic alloy, part of some shattered industrial machinery, the top of it is crooked, and the way he holds the staff suggests its use as a potential weapon, a heavy bludgeon. The man’s attention is focused on two forms up ahead of you, a feeling of fell power about them. The emaciated man flashes a look at you, it is haunted, feverish, but also sincere and non-threatening, the horror and rage in his eyes are not for you, but for what lies ahead.

You approach these objects of fell power which are hovering, ever so slightly bobbing, suspended on fields of slippery anti-gravitic energy, they are rotating slowly, one is shaped like a giant bell, the other is the classic domed disc, perhaps 20 meters in diameter with four meters of width at the domed center. Both objects are made of riveted titanium and have insignia, black swastikas, in a circular field of white. They are hovering, bobbing slightly in a field of energy which to you looks like heat rippled air.

You walk back to the entrance, to the emaciated man, and he speaks to you, his voice hoarse, but intense,

“You see what they are, you see the evil ones, the fathers of darkness, they are in a loop, a continuous loop, a loop I cannot break…. I am no scientist, no engineer, I do not know the technical secrets of it, but I know a little, I have heard it said that they use a radioactive form of mercury rotating at high speeds like a centrifuge, scalar waves generating a stable, continuous loop, a shielded loop in the lower astral, the antigravitic fields around them will not allow us to make contact or I would pound on them for a thousand years till their hulls shattered, but they are in a loop with time as well as space, time is slowed and out of phase with us, the atoms and particles within the loop, and the bodies suspended within these vessels are, from our point of view in time, animated by a metabolism that may involve only seventy heart beats in a day. But the minds of twisted evil within those bodies are not so suspended in time, nor are they contained, they are free to travel in the lower astrals as shape-shifters, and they are demons, in the bell-shaped craft is the demon Himmler, and in the disc is the arch demon, Hitler. They have killed all those that I have loved, have burned the living flesh of my beloved, Sarah, and have blasted the world into ruin. I will stand vigil here for a billion years if I have to, for ten billion—-for one day the loop will fail and I will batter on those hulls for another thousand years until I have broken them open and can batter their fleshly bodies into dust.”

As the emaciated man speaks to you, he also telepathically communicates images to you, and revealed in this telepathic imagery are the interiors of the Nazi craft, grey panels with black knobs, dials with needles trembling on calibrated scales beneath discs of glass. Interior electronics have rows of orange-glowing vacuum tubes, there are hatches with circular locks, as on submarines, and the hatchways are gasketed with heavy black rubber. Within you see the bodies lying in metabolic stasis on surgical gurneys of tubular stainless steel, ironed white hospital sheets, glass bottles of intravenous solution and clear tubing. Himmler and Hitler have pasty, pallid faces.

“While they are in this loop they have escaped the consequences of their evil. They escaped as the Third Reich was dying, as the Russians were shelling Berlin, but they escaped in these vessels into the lower astral, and the corpses which were found were clever counterfeits. And so their potent specters travel freely in this realm, and on Old Terra, as shape-shifting, shadowy forms, black sorcerers doing new evil, creating horror and suffering wherever they go. But I can do nothing about this, I can only stand guard, waiting for the loop to fail, and when it does I shall batter them into nonexistence.”