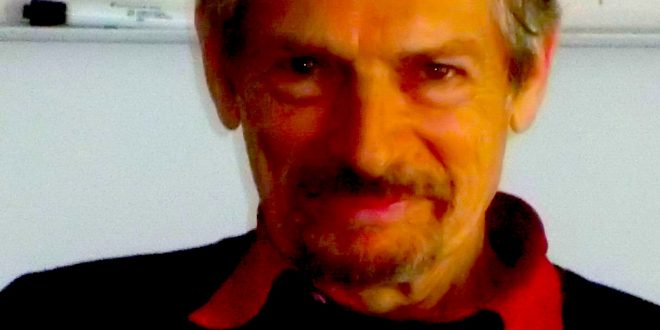 Flatland views of our species, consciousness (if it is admitted to exist at all), life, death, evolution and the cosmos are as ubiquitous in our society—in its thinking, attitudes, science, cultural artifacts, etc.— as memes about the Kim family are in North Korea. When you live within such a domineering and pervasive cult, it is not sufficient to have a general disagreement with its worldview. Its conditioning is so deep and pervasive that it is hard to see and name all the myriad ways it has affected us. If you really want to break free of the cult of materialism, you can find no better cult deprogrammer than visionary philosopher and artist Michael Grosso.

Someone once said, “Don’t read a book unless it is a ball of light glowing in your hands.” Every book by Michael Grosso is such a luminous orb. I’ve been typing up a personal quote collection from my excessively highlighted Michael Grosso books. To paraphrase Joseph Conrad, so many of Michael’s words are like, “jewels flashing in the night of time.” His penetrating perspective reminds me of a description early in the novel Dune by Frank Herbert:

“The sound of her voice had contained a difference then from any other voice in his experience. The words were outlined in brilliance. There was an edge to them. He felt that any question he might ask her might bring an answer that could lift him out of his flesh-world into something greater.”

I think of his collected works as a Bardo Grosso, a spiritual tool as fundamental to spiritual survival as The Tibetan Book of the Dead.

Consciousness Unbound: How I Freed My Mind from the Cult of Materialism  is a very recent blog by Michael Grosso that, in the fewest words possible, punches rabbit holes into the flatland view. But if you actually want to go down those rabbit holes, you’ll need some luminous spheres to bring with you. You can find theme here: Michael Grosso’s Amazon Page

After you’ve read Consciousness Unbound, you might be interested in some reactions to it that I sent Michael in an email:

Just finished reading Consciousness Unbound and it is about as concise and sharp a rebuke of physicalism as I’ve ever encountered. What’s especially valuable about your perspective is that you recognize that physicalism is not just something shackling the minds of contemporary philosophers, scientists and academically trained intellectuals. It rots society at its core. Toynbee found that civilizations began to decline when they no longer had a healthy ruling myth, and this is the case on the microcosmic level of the individual psyche as well. Physicalism is a disenchanting mythos that turns the “life giving rhythm of the eons into the dread ticking of the clock” as Jung put it.  This creates anxiety and despair which makes people into profitable fodder for big pharma. We can then stamp a DSM IV label on them, (my writing mentor at NYU, E.L. Doctorow called such labels “the industrialized form of storytelling”) and throw them into spiritually deadening neuropharmacological bardos.  (Though it should be admitted that some people are apparently helped by neuropharmaceuticals.) There is a voodoo economics of collective consciousness at work. As a school teacher I witnessed the trickledown effect of hollow and hollowing materialist theory on uneducated kids. Here’s an excerpt from my book on the Singularity Archetype:

As a teacher in an Alternative School for troubled adolescents, I worked with a fifteen-year-old boy (we’ll call him Adam) who was depressed, even suicidal. Adam was unhappy with his body and saw human existence as painful and futile. In talking about the source of his despair, he mentioned a television program he had seen a couple of years earlier. The program was a documentary that showed brain surgery being performed on someone suffering from epilepsy. During this operation, neurosurgeons would stimulate part of the patient’s exposed brain, see what response they got, and label that portion. Adam was horrified by the television documentary. It seemed that being human was reducible to a brain that was nothing more than a circuit board. He felt that this show proved that he was nothing more than a “meat puppet,” a term he borrowed from the name of a popular rock band.

Adam’s feelings about his own body, and human existence, were influenced by the briefest glimpse of the pseudoscientific position referred to as “neurological materialism” — the belief that human consciousness is nonexistent or is reducible to an epiphenomenal byproduct of chemical process in the brain. But we are not “meat puppets.” We are much more than our mortal bodies and we already possess a Glorified Body. For several hundred years the priests of science have influenced the rest of society toward the materialist fallacy. We have become much more focused on objects and our attention has been diverted from the realm of the spirit. Our present magic is technology, which we can buy at the store. The gods and goddesses we once saw in the heavens are now technology-wielding extraterrestrials who, like evil scientists, do medical tests on us inside of metal saucers. And, most significantly, we are focused on the body, our body and the body of the other, as an object. We’ve come to identify more strongly with the denser, mortal aspect of our being.