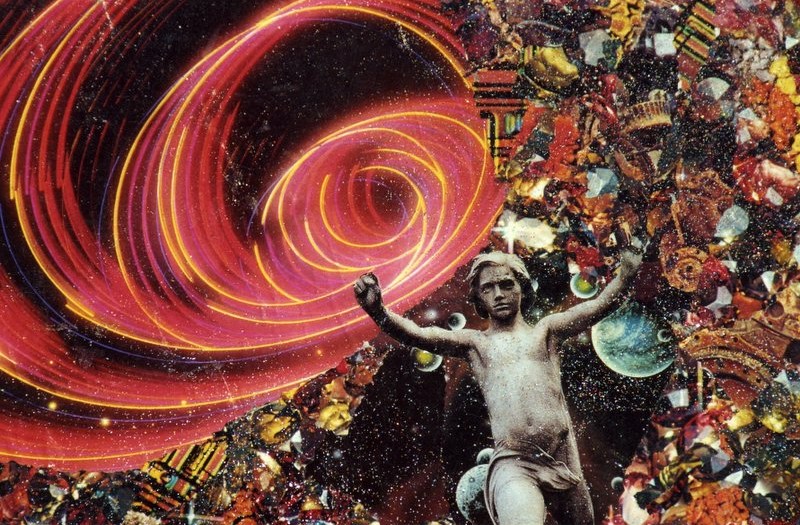 Cast off the shackles of dead-end wage-slave bondage, the mind-parasite tentacles, the multi-heart attack vice presidents with loaded shot guns, the mustachioed police troopers ready to pump 9-mm holes in alleged perpetrators of victimless crimes, the Abercrombie-and-Finch hottie torsos beckoning you into retail adventurism, the five-dollar lattes and gallons of dinosaur juice, the social squawkers and vidiot slackers.

March Forth! and assert your multiverse-given right to non-monotonous incarnation, your right to shatter Babylon McMatrix into other worlds than these, your right to phase and shape-shift at will, your right to shatter a world of florescent cubicles, burgeoning greenhouse gases, mind parasite-infected masses and monolithic mundanities and shatter it, shatter it, shatter it back into the misconceived zeros and ones from which it came and March Forth!, March Forth! Mutant Warriors and broadcast your unique energetic signatures like searing electric guitar chords amplified by nuclear-magnetic resonance to shatter planes of mundanity and prion-infected programs of patriarchal hegemony into blossoming, shimmering networks of user-mutated open source codes of infinitely reprogrammable possibilities.

March Forth! March Forth! Mutant Warriors and shatter it, shatter it with your will and mutant manifestation abilities, shatter the toxicities of regressive mustachioed monkey-minds, shatter the walls of monotony, shatter it, shatter the pseudo-patriotic preemptive quagmires to attack oil-rich nonexistent weapons of mass destruction with shock and awe of monkey-mind cowboy strutting in flight suit while mutant-hating rabid fundamentalists detonate themselves into 72-virgin-deficient bardos shared with nonraptured McHeartAttacked pseudo-Christians gnashing their teeth while multinational pharmaceutical companies turn wine, loaves and fishes into Selective-Seratonin-Reuptake Inhibitors.

This manifesto was originally written and published on March 4th of 2006. On March 4th of 2008, a young man named Jack Spencer Savage, eighteen-years-old, about to turn nineteen, who knew nothing of my writings, had what he described as a nervous breakdown that would not allow him to report to his bleak and oppressive job at a tax office in a strip mall. Instead, he “Cast off the shackles of dead-end wage-slave bondage” and marched forth (unaware of the date pun at the time) to the Greyhound bus station and took the first out-bound bus to anywhere. A few days later he met me in Boulder, Colorado where within the first thirty minutes of an intense conversation that is still ongoing, he told me that since high school  he had been  haunted by the need to write a fantasy story about an elvish boy who lives in a forest and journeys (marches forth) into the city.  It was the precise parallel to my unfinished fantasy epic, Parallel Journeys, which has haunted me for decades.

Jack, who marched forth to other worlds than these in the Spring of 2013, never got to finish his version of the story, but during an approximately two-year period of astonishing literary genius he created some of the most beautiful and haunting poems about the light and dark possibilities of the soul that you will ever encounter.

So, since this is a propitious day to embark on adventurous endeavors, as I would encourage you—I will state my parallel intention to seek to complete the story that both Jack and I have left unfinished.

Best wishes on your parallel journey—March Forth!