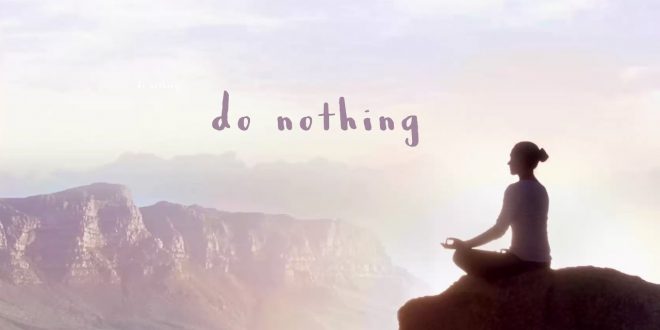 Walking into the empty sanctuary of his synagogue, a rabbi was suddenly possessed by a wave of mystical rapture, and threw himself onto the ground before the Ark proclaiming, “Lord, I’m Nothing!”
Seeing the rabbi in such a state, the cantor felt profoundly moved by similar emotions. He too, threw himself down in front of the Ark, proclaiming, “Lord, I’m Nothing!”
Then, way in the back of the synagogue, the janitor threw himself to the ground, and he too shouted, “Lord, “I’m Nothing.”
Whereupon, the rabbi turned to the cantor and whispered, “Look who thinks he’s Nothing!”  (from realnothings.com)

My friend Daniel W. Pailas posted the following on Facebook a few days ago:

I wrote this after a morning practice:

Remember that the healing breath work and meditation will catalyze the recognition of and connection with the empty awareness from where you are able to witness thinking. In doing this, one is able to much more effectively and consistently be present, with deeper awareness, and an enhanced ability to self reflect and watch oneself with care and compassion.

Over time, with these regular practices, one is able to gradually re-orientate one’s identity to the silent empty awareness itself; an identity that is aware of thinking rather than an identity invented by thinking; helplessly and unconsciously drowning in thinking. This is where and when the arrival of deep abiding inner peace in one’s life manifests. It’s a shattering of the illusion that thinking is who we are. Rather, who we are is the silent empty awareness that is aware of thinking.

Emptiness may be overrated. I agree that a state of mindful, metacognitive self-awareness is a higher level of development as compared to someone who uncritically identifies with their thoughts, but I’m not sure if breath work and meditation and abiding in emptiness are the only ways to get there.

Using myself as example: I’m usually aware of my thoughts as a language product that I am generating, or that are emerging from different levels of my unconscious as voices.  Instead of emphasizing muting the inner voices, I evaluate the reliability of the various narrators that  speak in my head and have Socratic dialogue with various of the propositions they offer. I’m also aware that thoughts are just one of the products emerging in this inner space—there are also images arising or that I am actively creating—and there are intuitions from various levels—which may begin as  deep, global feelings and hunches that my mind or unconscious will translate into words and images. I’m aware that none of this varied, interesting and evanescent content is “me,” that I am what Jung called “the Self,” the totality of psychic structures and that this varied, ever-changing content is no more me than the usually relevant, ever-changing content on my computer monitor.

I’m more interested in working actively with my inner contents—-which I find entertaining and creative and out of which I am able to create products I can export to the world—like these comments. Instead of being one more in an endless lineage of proselytizers of the virtues of emptiness, I  find it more fulfilling (emptiness not all that filling or fulfilling) and of benefit to myself and others to be a “content provider,” which seems a more desirable profession than “purveyor of emptiness.” By emphasizing individuation over empty oneness, I have more unique content to provide. In general,  I see more value in engagement with life, the temporary opportunity of human incarnation, rather than being detached and in a state of empty abiding —though I get it that a daily meditation practice can help with mindfulness and focus.

A fellow Jungian, Arnold Mindell, has a theory that a lot of the therapeutic benefit of meditation is not emptiness, but that in trying to achieve emptiness people slow down and notice what is actually going on in their inner space. I think a lot of suffering neurotic people are experiencing what Jung called “psychic entropy,” a state of inner fragmentation characterized by looping negative thoughts. see: Dealing with Psychic Entropy. Most people experience only “passive imagination” —an unstable, often toxic montage of images reflective of their state of psychic entropy, whereas I practice “active imagination” where I edit and direct my imaginal process in ways that I find entertaining and revealing. Western neurotics who are oppressed by psychic entropy are often seduced into what James Hillman calls “going eastern.” They nonsensically think that they need to get rid of their ego and thinking function. This is like someone whose computer is infected with malware thinking that answer is get rid of their computer and all software.

What they may actually need is to develop a stronger, more conscious ego and to get better at thinking and imagination. They also need to learn something about the hierarchy of psychic functions and that their ego and thinking functions are indispensable, but must not be in the ruling position (see section on the hierarchy of psychic functions  in A Guide to the Perplexed Interdimensional Traveler).  The ego and thinking function need to work under the guidance of the Self which can direct them via deep, global intuitions. Most people have an ego-mind alliance in the ruling position, a role these functions are not competent to fill, and that leads to psychic entropy.

I think there are a number of key flaws in emphasis in many eastern modalities especially: a one-sided emphasis on vertical transcendence over horizontal psychological development. One of the consequences of this one-sided emphasis: abusive gurus who have had transcendent experiences and falsely conclude, and persuade others, that they are permanently enlightened while they are blind to their shadow, thereby empowering it to act as a ruking autonomous complex via “crazy wisdom path”  rationalizations, while they commit endless abuses related to power, sex and money.

Emptiness is also sometimes referred to as “oneness” and there are some eastern influenced and/or New Age folk who will monotonously insist on the oneness of everything no matter what is being discussed, and use this obvious reality as a way of leveling all difference, distinction and discernment. This point of view can be even more limiting than the tunnel vision of the reductive thinker, since at least the reductive thinker is still thinking about and investigating something, no matter how much they miss the infinite, interrelated context of the something.  Some however use oneness and emptiness as a you-can’t-top-this truism that relieves them of the need for thinking, discrimination and discernment.  They will  pull emptiness or oneness out of their hat, like the most tired of magician’s rabbits, believing they have conjured the ultimate profundity that answers any challenge, question or proposition.  More than a century ago,  William James wrote that besides the oneness of things, anyone who glances at the phenomenal world should also be struck by the eachness of things. We see a world of unique individual trees and people, for example, and not an homogenous mass of treeness or undifferentiated pool of humanity.

The one-sided emphasis on emptiness and oneness over content and eachness results in a diminishment of individuation and creates a boring, one-size-fits-all goal for everyone.

See: Lessons for an Entity Incarnating as a Mammal  and Dynamic Paradoxicalism—the anti-ism, ism  for more on why oneness doesn’t trump eachness, but that both are better worked with as what I call a “dynamic paradox.”

You can find my analysis of why eastern modalities so often create abusive gurus (with a special focus on Adi Da, Chogyam Trungpa and a few other toxic gurus) here:

A Spiraling Eye-Encrusted Overview of the Art of Alex Grey.

I’ve used myself as an example, but I am not offering a one-size-fits-all formula that assumes that what works for me is suitable for everyone. Tastes vary. I like to prepare, for myself and others, nutritious meals with varied, interesting tastes while the next guy might like to feast on the vacuum of emptiness while sitting alone in their room.

Abiding in emptiness once in a while can be a restful relief from psychic entropy,  but overall I prefer interesting, entertaining, developmental content, content providing, individuation and engagement with inner and outer life.

Also, on the level of psychological realism, I can’t think of a single time I’ve run into you (Daniel Pailas) where I felt that you were coming from a place of abiding emptiness. Quite the opposite—you always seem to be thoroughly individualized, with a strong ego highly focused on an agenda related to your practical goals and passionate interests. And I think that is a good thing. I like intense, highly individualized people who are passionately devoted to creative pursuits rather than hollow folk who live on a monocultured, eastern diet of emptiness.

If I wanted emptiness, I would buy a ticket for  a slower-than-speed-of-light solitary space sojourn to any star. I don’t recommend this, even for an emptiness enthusiast such as yourself—after the first thousand years or so, I think even you will find the emptiness of space to be overrated.

Note: the above was written as a comment to a friend’s Facebook post and was meant as a humorous provocation aimed at my friend Daniel, who often promotes eastern practices and gurus, rather than as a serious critique of the Buddhist concept of emptiness. Some parts are meant seriously, but I won’t say which ones since all parts emerged from the oneness and the emptiness within.