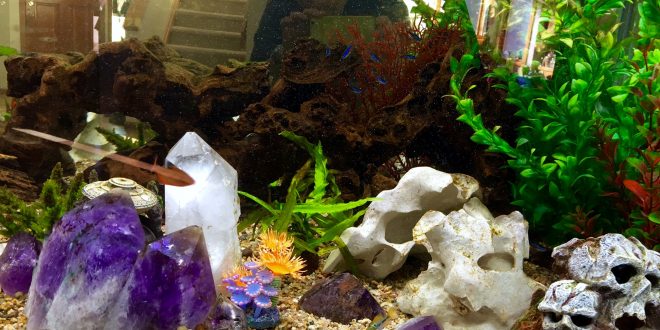 It has now been just two weeks since I started working on my new aquarium with my friend, the noted aquariumsmith, Jessie Dammiann, who has forty years of professional experience (he started getting paid to work on aquariums when he was twelve).

It’s fascinating to observe this miniature ecosystem and the complex social interactions and behaviors of some of the fish. The morning before we set up the tank, I googled “fish intelligence” which I assumed was an oxymoron and didn’t expect to find much. Recent scientific research, however, indicates that fish have feelings, long-term memories,  use tools, have a “theory of mind” (they can practice deception which requires an ability to project yourself into another’s POV) and some can be taught be tricks more easily than dogs. According to Culum Brown from Macquarie University, “Fish are more intelligent than they appear. In many areas, such as memory, their cognitive powers match or exceed those of ‘higher’ vertebrates including non-human primates.”[2]  (from fish intelligence wiki)

After doing this research I decided to reaffirm and tighten up a very sloppy commitment to veganism.

Fish may be far more intelligent than they appear, but they are not perfect. In the last two weeks I’ve had to learn the hard way that the projections and assumptions that fish make, from their side of the aquarium, about people are not necessarily correct. In particular, assumptions that “my” fish make about me, based on things they’ve observed me doing or saying (but often taken out of context) and what they assume based on those observations about my intentions, lifestyle, writings, politics, etc. are not necessarily correct.

I’m not sure how aware this particular community of fish is of social media and things I publish online, but let’s just say I would like to convey to certain members of the aquatic-vertebrate persuasion that human beings are often wrong in what they assume about other human beings, and what unnamed members of one vertebrate species (who are not even mammals) assume about me, and things they’ve seen me do (observed out of context) are highly subjective and likely to be full of projections and false assumptions.

Cross-species politics are tricky, and require much care and attention, so to just passive-aggressively ignore things I do or say that don’t directly affect your egocentric agenda can be seen as a lack of basic respect to the person putting flake food, on a daily basis, into your tank.  I may not always retaliate to such gross insensitivity, but any of you who misinterpret this as a sign of weakness are making a grave error that could have far-reaching consequences. I am not trying to appear threatening, but let’s just say that aquatic vertebrates who live in glass houses should not throw stones, especially not at a person who happens to control  their entire ecosystem.

neon tetra “schooling” in my tank

Also “schooling” together, which I’ve noticed that most of you of the same sub-species seem to do, suggests a tendency toward groupthink and a certain lack of appropriate boundaries necessary for individual development.

While I realize that I too may make subjective and unreliable projections toward you, and may even anthropomorphize at times, it does seem like a lot of the behaviors I observe seem highly stereotyped, repetitious and almost mechanical.

Yeah, I get it, you are just living your lives, and are not here to meet my expectations. Nevertheless, because I care and believe in your potential, I can’t help to feel disappointed at times with how you choose to spend  so much of your time  on activities that to me seem highly monotonous and routinized.

the largest of my ancistrus (“algae-eating” catfish)

For example, why do so-called “algae-eating fish,” an identity/label/role imposed by human beings, feel a need to spend so much of their day eating algae rather than developing their own uniqueness irrespective of human expectations of group tendencies?

Finally, someone once said, “Don’t grow up, grow forever.” While I’ve seen a number of you grow physically larger since I increased your rations of red worm and flake food, and size does matter, but what I really want to see, for your sakes as well as mine, is that you grow more as individuals, and I hope that one day you will come to see me more as an individual and less like a giant, lumbering meat robot putting things in your tank.