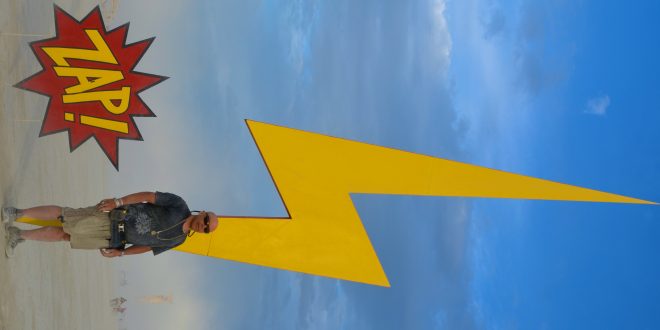 I went to five festivals this summer including Burning Man (my 4th time) and the National Rainbow Gathering (my 18th) and I think that what governs whether these festivals are transformational or not is how strong the center of self-actualization is in the person who participates. There are two implications: One is that people without a strong center of self-actualization will not be transformed very much. It is easy to go to Burning Man as a hedonistic, party-blow-out, Mardi Gra-plu- cool-visuals experience. There have always been people going to Rainbow Gatherings that we call “drainbows” who are there for the free goodies and who give little (and change even less) in return. The other implication is that while Burning Man and certain other festivals may be propitious environments for transformational persons, they are more likely to be emblematic for them of personal transformations already in progress rather than absolutely essential catalysts for metamorphosis. For the self-actualizing they are likely to support or enhance a metamorphosis that was provoked by more essential causes.

I am growing increasingly cynical about some of the hype and inflated claims made on behalf of festivals and also by the psychedelic community that both conspire to create a transformational glamour sparkling around a core of stagnation.  The inflation of transformational claims is often a very superficial misdirection from the reality of a core of personality that has scarcely transformed at all.  Some of the inflated claims are such laughable examples of Emperor’s New Clothes-hollowness that I don’t know how anyone can utter them with a straight face.  For example, the “radical inclusion” claim of Burning Man. Anyone with the disposable income to spend at least several hundred dollars (more usually over a grand) can go to the festival. So? Anyone with the purchase price can buy a ticket to a NASCAR rally or an NFL game. Those venues will allow me to buy a ticket even if I am an atheist or a transsexual, though admittedly I might get less welcome stares if I dressed up in a Burning Man outfit at those events. Another bit of inflated jargon: “Radical Self-Reliance.” Right. Nothing standing between me and the desert except ice distribution centers, Center Camp baristas and tens of thousands of wealthy people in an armada of RVs offering me free food and drink. (for a more thorough lambasting of “radical self-reliance see my major Reality Sandwich article on Burning Man: Incendiary Person in the High Desert Carnival)

No question in my mind that psychoactive substances can be potent catalysts for metamorphosis for a self-actualizing person. But at Burning Man 2014 the gulf between inflated claims and actual lack of transformation really struck me. I listened to at least two people I know talk in this inflated, flowery language about their personal experiences with the transformational power of various substances and then I did a quick inventory of what Jung called “the shadow” aspect of their personalities. This wasn’t some super-perceptive psychoanalytic probe into their depths, but just a case of recognizing overt, even comically obvious, aspects of their characters.  Beneath the transformational hype here’s what I noticed about the unchanged core of their personalities:

Narcissism (I’m very sensitive to this aspect as a recovering narcissistic personality type myself) Higher than ever.  Now their narcissism had these psychonaut anecdotes to embellish their self-image.  Psychonaut experiences?  You got them, FLAUNT THEM!  If there was a hottie in earshot, they had an ayahuasca rap ready to go.

Self-centered, selfish and egocentric?  Check. Before picture same as after picture.

Same-old/same-old sex and popularity games?  Check. Before picture same as after picture.  Instead of having etchings to show hotties, now they had psychonaut anectdotes!  At the center of their transformational substance/festival ministry was the same-old/same-old impress-the hottie-agenda. Burning Man 2014 would no doubt be an invaluable source of new anecdotes with which to impress hotties.

Take a hard look beneath the glowing faux fur and steampunk goggles of the Emperor’s newest and coolest clothes.  You may find that those who most hype the transformational power of festivals and psychedelics are often merely putting on a many-colored coat of  transformational glamour and glitter to hide from themselves and others a stagnant core.

My more thoughtful and thorough exploration of the light and dark aspects of Burning Man and festival culture published in Reality Sandwich: Incendiary Person in the High Desert Carnival