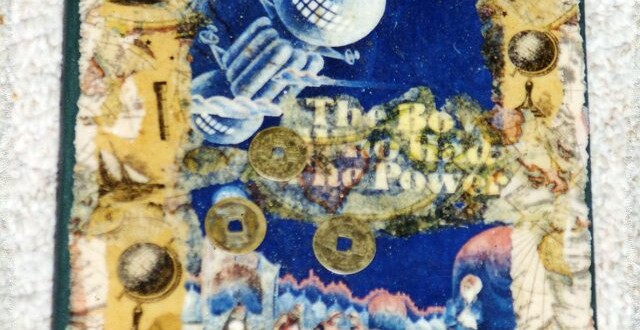 I have been collecting quotations for a long time.
Aphoristic quotations are sometimes the most efficient
and entertaining expression of universal truths. For this reason
one can often find quotes from very divergent sources and times that
say almost the same thing in almost the same words. Sometimes they
may have influenced each other, but often they have been
independently influenced by universal truth. Everyone’s’ ego tends
to create narrow tunnel views of things, especially things that
frustrate us and arouse fear and desire. The right quotations at
the right time can be like diamond bullets that blast holes in those
tunnels and make us aware of much larger vistas.

My barn having burned to the ground, I can see the moon.
—Chinese Proverb

The best quotations resonate with our inner truth sense and help to
strengthen us in following what we already know to be true, but
often forget under stress. I have many more quotations on file, and
find new ones frequently, so if you like these, you can expect more
to come your way in the future. By the way you can make an
expandable oracle for yourself using a sufficiently diverse
collection of quotations. All you have to do is print them up, cut
them out and individually paste them onto identical index cards.
You can then pick cards at “random” from your collection. Through
the principle of synchronicity your quotations can now individualize
their dialogue with your mind, they can come from left field, tell
you exactly what you already know, offer corrections, inspirations,
solace, prodding, and an array of other oracular functions.

I hate quotations. Tell me what you think. —–Emerson

This is the awe-inspiring universe of magic: there are no atoms,
only waves and motions all around. Here, you discard all belief in
barriers to understanding. You put aside understanding. You put
aside understanding itself. This universe cannot be seen, cannot be
heard, cannot be detected in any way by fixed perceptions. It is
the ultimate void where no preordained screens occur upon which
forms may be projected. You have only one awareness here—the
screen of the magic: imagination! Here, you learn what it is to be
human. You are a creator of order, of beautiful shapes and systems,
an organizer of chaos.
—–The Atreides Manifesto, Bene Gesserit Archives
(From the Dune books)

The greatest and most important problems of life cannot be solved.
They can only be outgrown. —-Sister Jessica, Private Journal
Entry (from House Harkonnnen, Dune books)

There is only one corner of the universe you can be certain of
improving, and that’s your own self. —-Aldous Huxley

A single sunbeam is enough to drive away shadows. —St. Francis of Assisi

The journey of a thousand miles begins with a single step.
—-Lao-Tzu

The greater part of our happiness or misery depends on our
dispositions and not on our circumstances. —-Martha Washington

Two men looked out through prison bars; one saw mud, the other,
stars. —James Allen

Life is ten percent what you make it, and ninety percent how you
take it. —Irving Berlin

Every great and commanding movement in the annals of the world, is
the triumph of enthusiasm. Nothing great was ever achieved without
it. —-Ralph Waldo Emerson

I think and think for months and years. Ninety-nine times, the
conclusion is false. The hundredth time, I am right. —-Albert
Einstein

Take care of what you like or you will be forced to like what you do.
—-George Bernard Shaw

The future belongs to those who believe in the beauty of their
dreams. —Eleanor Roosevelt

The greater danger for most of us is not that our aim is too high
and we miss it, but that it is too low and we reach it.
—Michelangelo

You can gain strength, courage and confidence, by every experience
in which you really stop to look fear in the face. You must do the
thing you think you cannot do.
—-Eleanor Roosevelt

Let me listen to me and not to them. —-Gertrude Stein

When our center is strong, everything else is secondary. —Elie Wiesel

I couldn’t wait for success so I went ahead without it. —Jonathan Winters

No one can make you feel inferior without your consent. —-Eleanor Roosevelt

If you don’t run your own life, someone else will. —-John Atkinson

It is never too late to be what you might have become. —George Elliot

I always wanted to be somebody, but I should have been more
specific. —Lilly Tomlin

When we are no longer able to change a situation, we are challenged
to change ourselves.
—-Victor Frankl

I’m an old man who has known a great many problems, most of which
never happened.
—-Mark Twain

A day of worry is more exhausting than a week of work. —-Unknown

When you get to the end of your rope, tie a knot and hang on! —-FDR

Everything that irritates us about others can lead us to an
understanding of ourselves.
—-Carl Jung

Worry is the misuse of your imagination. —Unknown

What you can’t get out of, get into wholeheartedly. —Unknown

When you don’t have red, use blue. —Unknown

Holding resentment is like eating poison and then waiting for the
other person to keel over.
—-Unknown

It’s hard to defeat an enemy who has an outpost in your own head.
—Sally Compton

The greatest discovery of my generation is that human beings can
alter their lives by altering their attitudes. —-William James

If you want to be strong, know your weaknesses. —Unknown

Even loss and betrayal can bring us awakening. —Buddha

Life consists not in holding good cards; but in playing those you
hold well. –Josh Billings

Fear is the dark room where negatives are developed. —Unknown

Just as a snake sheds its skin, we must shed our past—over and
over again. —Buddha

He who conquers his anger has conquered an enemy. —Unknown

Reflect on your present blessings, of which every man has many: not
on your past misfortunes, of which all men have some. —Charles
Dickens

Always forgive your enemies, nothing annoys them so much. —Oscar Wilde

In spite of everything, I still believe people are really good at
heart. —Anne Frank

To belittle is to be little. —Unknown

We are shaped and fashioned by what we love. —Goethe

There are two ways of spreading light. To be the candle or the
mirror that reflects it.
—-Edith Wharton

Keep away from people who try to belittle your ambitions. Small
people always do that, but the really great make you feel that you
too can become great. —Mark Twain

Love in an unconditional commitment to an imperfect person. —Unknown

Nothing has a stronger influence physiologically on their
environment, and especially on their children, than the unlived
lives of the parents. —C.G. Jung

The time to relax is when you don’t have time for it. —Sydney J. Harris

In the name of God,
Stop a moment, close your work,
And look around you. —Leo Tolstoy

The hardest work of all is to do nothing. —Jewish Saying

Life is full of misery, loneliness, and suffering—and it’s all
over much too soon.
—Woody Allen

What a wonderful life I’ve had…
I only wish I’d realized it sooner.
—–Colette

The heart has reasons which the reason does not know. —Unknown

The following quotes are all by Sir Winston Churchill. Although a
careful examination of his biography will tend to deflate and
disappoint his mythological standing, he is certainly one of the
greatest writers of inspirational aphorisms.

Promises are the blowing of glittering bubbles; performances are the
moulding and hammering of iron.

The watchword we must carry must be that vigilance be unceasing.

When great causes are on the move in the world, stirring all men’s
souls, drawing them from their firesides, casting aside comfort,
wealth, and the pursuit of happiness in response to impulses at once
awe striking and irresistible, we learn that something is going on
in space and time and beyond space and time, which, whether we like
it or not, spells duty.

It is a mistake to look too far ahead. Only one link in the chain
of destiny can be handled at a time.

An end is a new beginning. It allows the space in time for new
quotations to come your way later. —Jonathan Zap

Genius might be described as a supreme capacity for getting its possessors into trouble of all kinds.
– Samuel Butler

“HE WHO WILL DRINK FROM MY MOUTH WILL BECOME LIKE ME. I MYSELF SHALL BECOME HE, AND THE THINGS THAT ARE HIDDEN WILL BE REVEALED TO HIM.”
said by Jesus in the recently discovered Gospel of Thomas

With stupidity the gods themselves contend in vain.
– Friedrich von Schiller

In each of us two powers preside, one male, one female: and in the man’s brain, the man predominates over the woman, and in the woman’s brain, the woman predominates over the man…If one is a man, still the woman part of the brain must have effect; and a woman also must have intercourse with the man in her. Coleridge perhaps meant this when he said that a great mind is androgynous. It is when this fusion takes place that the mind is fully fertilized and uses all its faculties. —-Virginia Woolf

The heart has its reasons which reason knows nothing of. Blaise Pascal