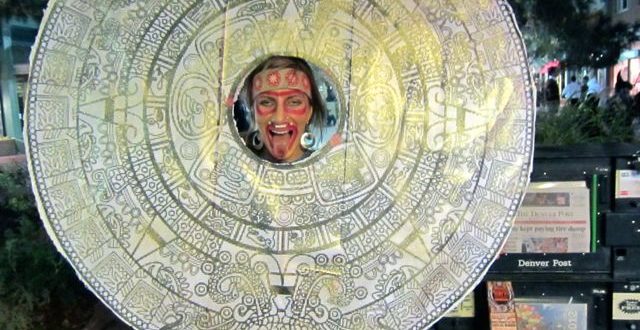 photo and text by Jonathan Zap

Photo: Halloween costume circa  Halloween 2011 in Boulder, Colorado Note: the costume shows the ubiquitous Aztec Calendar Round which people erroneously think is an image of the Mayan calendar.

This revisit was inspired by my friend Mark Heley’s recent feature article on Reality Sandwich, What Actually Happened on December 21st, 2012?

Ever since my friend John Major Jenkins and I began dialoguing about 2012 (beginning in 1996 when we met through Terence McKenna (see: A Mutant Convergence co-written with John for a story about the high strangeness surrounding this meeting), I found that the psychopathology surrounding 2012 was more interesting to me than anything about the Mayan calendar. I published my study of that psychopathology in 2010: Carnival 2012—A Psychological Study of the 2012 Phenomenon and the 22 Classic Pitfalls and Blindspots of Esoteric Research (follow the link to read it for free or listen to it as a podcast).  Jenkin’s book on the cultural history of 2012, The 2012 Story, was my best source material. Ironically, the first published connection of 2012 with apocalypse did not come from a New Age charlatan, but a respected  academic!  John provides an excerpt from Maya scholar Michael Coe’s 1966 book The Maya:

“There is a suggestion that each of these [time periods] measured thirteen Baktuns, or something less than 5,200 years, and that Armageddon would overtake the degenerate peoples of the world and all creation on the final day of the thirteenth.”

Coe was wrong, there was no support from any known Mayan text for an apocalyptic interpretation of the cycle shift. In my book, Crossing the Event Horizon, Human Metamorphosis and the Singularity Archetype, and in Carnival 2012, I explore the psychological underpinnings of apocalypticism and why it has been such a popular brand since its first appearance in Zoroastrianism.

If you read Jenkin’s books you discover that there are two meaningful aspects to 2012 that are completely independent of anything happening on 12/21/12. One is that John’s theory that the Maya were aware of a certain optical galactic alignment that they coded into their calendar is highly significant from the perspective of archeo-astronomy regardless of whether the date has any predictive value whatsoever. Second, if you wanted to make the best possible case for 2012 having a valid connection to a cycle shift you would relate it to the precession of the ages archetype which Aldous Huxley presents in his book, The Perennial Philosophy.  The belief in a great precession of ages was central to many cultures besides the Maya (Hopi, Hindu, Egyptian, Western Alchemists, etc.). IF the Maya were able to locate an actual cycle shift between ages, it would not be something you would expect to notice on a time scale as minuscule as a single day. Even in our present era in which the metabolism of history runs at a feverish pace it would be more reasonable to notice on the scale of decades. Isn’t that obvious? Even on the scale of a single human life it is understood that great cycle changes usually happen on a longer scale than 24 hours. For example, if someone said to you, “I had a mid-life crisis.” You wouldn’t ask, “On what day did that occur?”

If you look at the cycle shift from a perspective of decades (which is still a very thin slice of time when you consider the age of the species), you can make a sound case that it does seem to be happening—there is powerful evidence of enormous changes occurring to human consciousness and our relationship to materiality which I discuss in my book Crossing the Event Horizon .

The validity of the two core meaningful aspects of the 2012 date—Jenkin’s archeo-astronomical insight into the thinking of an ancient culture and the possibility that the Maya located the epicenter of a great cycle shift (which would not depend on dramatic events happening on a particular day) were not invalidated by the fact that nothing of particular note happened on that date.  Also not invalidated, and actually extra-validated, was the layer of meaning that still interests me the most about 2012—the psychopathology that caused so many to project nonsensical expectations on a date whose comical anti-climax was the most predictable part of the whole phenomenon.