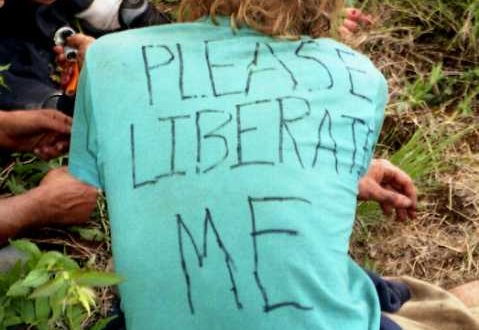 The image here is ironic because the subject appears to be completely bound in victim consciousness. If you are looking for someone or something outside yourself for liberation then you have just checked yourself into Super Max and thrown away the key. Some people define self-liberation politically, and feel that what prevents their liberation is the Patriot Act and encroachments on their privacy and so forth. A stronger case for this POV could be made if there were actual imprisonment, but even then some strong people have found self-liberation while in the Gulag or Hanoi Hilton, etc.

Physical liberation in a corporeal incarnation is never fully attainable. Even if I were a billionaire, with a diplomat’s passport allowing me travel anywhere, I am still imprisoned in a fragile, corporeal body that is subject to accident, illness, aging and, inevitably, death. Only death has the potential to liberate me from the constricting parameters of mortality.

A more powerful indication of liberation than compromised physical liberation is free will. I believe that free will does exist, but that it is more rare and more fragile than most people would care to recognize. You cannot be free if you live in a deterministic universe, no matter what physical luxuries you have, no matter your privacy or freedom of travel. In a deterministic universe you can only be a puppet, and a puppet cannot be free. Many people live in a mostly deterministic universe because they don’t have enough self-awareness or independent consciousness to earn self-determination. Instead of free will they submit to acquired conditioning, and operate on mechanical habits and grooved patterns of reactivity.

A sufficiently self-aware person is capable of free will, and may be in a state of self-liberation while in a concentration camp, a strait jacket, or a dying body lying on a hospital gurney. The liberation that really matters during a corporeal incarnation is cognitive liberty, the ability to sometimes choose your perceptions and definitions of inner and outer reality.

An ultimate form of cognitive liberty allows you to be what J.R.R. Tolkien called a “subcreator.” A free-willed, self-aware, creative person can create his own world on the imaginal plane. Only someone who has experienced this freedom can fully understand how powerful and liberating it can be.

Yes, government, the patriarchy and so forth, can further restrict our already limited physical liberty. The matrix of oppression can restrict our cognitive freedom in some cases by limiting our access to information and culture. But anyone who has unfiltered access to the internet has more access to information and culture than any pre-internet head of state. Government can limit or punish access to consciousness-enhancing resources that have served for millenia as catalysts to cognitive liberation. There are walls all around us, but there are also cracks in the walls and often ways around them. Despite the Patriot Act, globalization, and so forth, most people in Western countries, people with food, shelter and unfiltered internet access have (from an historical perspective) unprecedented freedom. If you want to know what real outside oppression is, investigate what life is like for a Muslim woman in a fundamentalist regime. See: Jihad against the Feminine

The jailer that usually stands between myself and greater self-liberation is me. For the person reading this, the forces that most likely limit your self-liberation are to be found in you, not in society. Habits, mechanical patterns of thought and reactivity, neurotic delusions, disempowering self-definitions, indulging addictive appetites, etc. — these are the forces that usually curtail our cognitive and behavioral freedom, and our free will.

For example, my range of self-liberation has expanded significantly in the last twenty-four hours because of a key realization. I realized that I have tended for decades to imprison myself with the belief that heroic efforts at self-discipline were the path of courage, of becoming stronger and more free-willed. Yesterday I came to realize that what will liberate me far more at this phase of my development is greater self-acceptance, not more forceful self-correction.

Looking outside for salvation encourages victim consciousness or being the slave of a person, obsession or fundamentalism. Instead, look within to see how you imprison yourself and you may find a key to self-liberation.