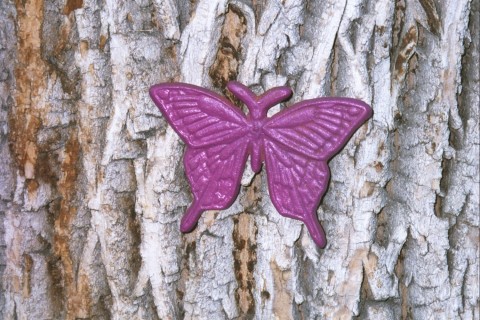 Human incarnation is usually a fluctuation between metamorphosis and stagnation. As the Dylan lyric puts it: “he not busy being born is busy dying.”

Norie Huddle, in her book Butterfly, describes in poetic language the metamorphosis of caterpillar into butterfly:

“And then an amazing thing happens! The little tiny lonely imaginal cells start to clump together, into friendly little groups. They all resonate together at the same frequency, passing information from one to another. Then, after a while, another amazing thing happens! The clumps of imaginal cells start to cluster together!… a long string of clumping and clustering imaginal cells, all resonating at the same frequency, all passing information from one to another there inside the chrysalis.

“…Then at some point, the entire long string of imaginal cells suddenly realizes all together that it is Something. Different from the caterpillar. Something New! Something Wonderful! …and in that realization is the shout of the birth of the butterfly!

“Each new butterfly cell can take on a different job. There is something for everyone to do, and everyone is important. And each cell begins to do just that very thing it is most drawn to do. And every other cell encourages it to do just that. A great way to organize a butterfly!”

For there to be a metamorphosis, certain existing structures need to be broken down to make room for new ones. In the chrysalis, most of the caterpillar’s old body is digested and used as a nutrient source to construct the new body. The human ego, however, fears change and tends to desperately cling to an existing identity. Metamorphosis can, therefore, be interpreted as catastrophic, and the old ego-identity, recognizing a threat to its very existence, will seek ways to defend itself. Like the caterpillar, the old self may have an immunological reaction to the budding of the new self. Also like caterpillars, we have imaginal cells within us, parts of us that contain the catalytic vision-seeds of the future.

Let’s ground this with a personal example. Sometime in the Nineties an eighty-year-old woman, who was a Jungian analyst, gave a talk I attended in Boulder. At the end of her talk there were questions from the audience and the first one came from a young woman. “Now that you are an elder,” asked the young woman, “what you can tell me as a young woman about love?” The elder woman replied, “When I was your age I was desperately trying to be loved. But now I know that it is better to simply be love.”

The old woman describes a profound metamorphosis that took decades. The metamorphosis from self-centered to selfless is one of the most classic and valuable. Goethe described it this way:

“Human life runs its course in the metamorphosis between receiving and giving.”

I have been working on exactly this metamorphosis in my own life. As a recovering narcissistic personality type, I find that it is very easy for me to fall into preoccupation with being loved. Many of us fall into the common delusion that if only we can be loved by some particular person we aspire to romantically, then everything will be great. But if I allowed myself to focus obsessively on being loved, I would only be prolonging adolescence into middle age. Also, trying to be loved doesn’t work all too well. If what we want from others predominates, then most will correctly sense us as needy and self-centered, which will likely make us less attractive to them. The more we try to contrive and force progress with love, the more neurotic and desperate we become, which only helps to keep love away. A person who has successfully moved toward being love, however, is like a source of love and warmth that other people want to be near.

As I work on the long path of metamorphosing toward being love, I can sometimes hear frantic inferior voices within me saying things like, But if I don’t try to get love back from others I won’t get anything. or, If I just focus on being love, others will just take that for granted and won’t bother to love me back. Even though the old identity, which consisted of an uneasy coalition of subpersonalities and various neurotic stratagems didn’t work very well in the past, they still want to be in charge. They’re like a dysfunctional conspiracy of old, corrupt politicians who know that they have presided over famine, depression and a series of inner and interpersonal wars, but are nonetheless determined to be reelected and feel entitled to lifetime terms. To the old coalition of subpersonalities, metamorphosis appears as a looming black-robed reaper wielding a scythe. To a deeper self, metamorphosis appears as sunlight entering a smoked-filled room. As the sunlight intensifies, furtive figures scurry away into vanishing shadows and the light exposes crumpled masses of scribbled papers, the tawdry remnants of backroom dealings and smear campaigns that soon become cinders trailing away as wisps of smoke.

The metamorphosis from trying to be loved to trying to be love is very likely going to be something I’ll still be working on when I am eighty, if I make it to that age. To keep such a gradual metamorphosis going takes continual vigilance and an ability to relinquish, to sacrifice the obsolescent focus on getting love and the various neurotic ways of trying to go about that. The example I gave of the eighty-year-old woman and myself was an illustration of one type of metamorphosis, but there are many others. The crucial thing is for you to know what sorts of metamorphoses are going on in you so that you can consciously assist these transformations.

If a caterpillar/butterfly had a human life span, then its time in the chrysalis would also last for decades. Unlike the caterpillar/butterfly, most human beings cannot afford to retreat into a cocoon while undergoing the metamorphosis. Usually we need to work on metamorphosis while still functioning in the world. To succeed with the transformation we need great perseverance, patience and just the right balance of firmness and gentleness with ourselves.

Whether you are undergoing sudden or gradual transformation, consider the occurrence of this card as a sign that this is a propitious time for metamorphosis.