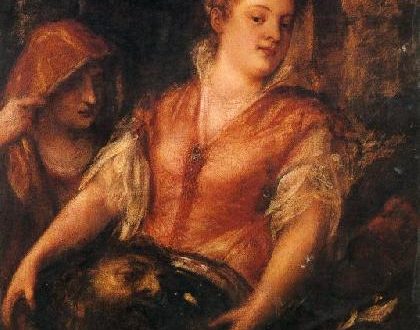 Salome with the Head of St John the Baptist

Don’t let the matrix castrate you. Many forces seek your disempowerment. One of the most basic forms of castration (for males or females) is to keep your attention focused on the pursuit of a glittering external object — the hottie, money, social status, worldly power, consumer goods, etc. In this position your head is captured in the wrong end of the telescope and you become ever more removed from your real source of power — the neglected core of wholeness within.

Is there something you see as more powerful than yourself which you worship? That’s one of the essential forms of self-castration. The Sanskrit definition of God is a circle whose center is everywhere and whose circumference is nowhere. You are at the center of the circle, and so is everything else. If you worship an external savior and therefore place yourself as outside the circle of the divine looking in, then you betray your soul and descend into fundamentalist madness. In the recently discovered gnostic Gospel of Thomas Jesus says: “He who will drink from my mouth will become like me. I myself shall become he, and the things that are hidden will be revealed to him.” The Gnostics understood the need to discover divinity from within, rather than from without. If you worship an outer text, savior, object of romantic infatuation, nation state, church, or matrix, then you empower Anti-Christ energy.

Power may be given away to an idea, an ideology, a fundamentalism (religious or secular), a movement, an addiction, an exciting, dangerous activity and so forth. There are myriad things that people give their power away to.

You automatically disempower yourself when you inflate another person into a God and this can happen with romantic infatuation, guru worship, fundamentalist mythologizing and other relationships that have an unhealthy asymmetry of power.

What is the motive that causes so many people to give their power away to a force that wants to dominate them? I speculate about that in my essay on the financial meltdown Foxes and Reptiles — Psychopathy and the Financial Meltdown of 2008-9,

“I have a theory of the often astonishing appeal of psychopaths, cult leaders, super salesmen and demagogues of various sorts that uses magnetism as analog. Most people are highly fragmented and oppressed by what psychologists call “psychic entropy” — the anxious tape loops and other distracted thoughts and fantasies that crowd their attentional space. When a person of single-minded focus and confidence appears it is analogous to placing a powerful magnet below a sheet of paper on which there is a scattering of iron filings. The magnet immediately organizes the scattered filings into a coherent pattern that reflects its magnetic field. The scattered personality feels an immense relief to be structured in this way from the outside and craves further contact and submission to the magnetic personality that can produce this effect which relieves them of their default state of psychic entropy.”

People may be similarly motivated when they give their power away to a fundamentalist religion, a new diet or financial scheme, a motivational speaker and many other forces and persons. They want something that will structure them from the outside in.

To whom or to what do you give away your power? Consider this is a propitious time to reclaim it.

More on giving away your power to others and how to reclaim it:

How reclaiming power relates to our place in the great cycle shifts of the species:

The Mutant versus the Machine…