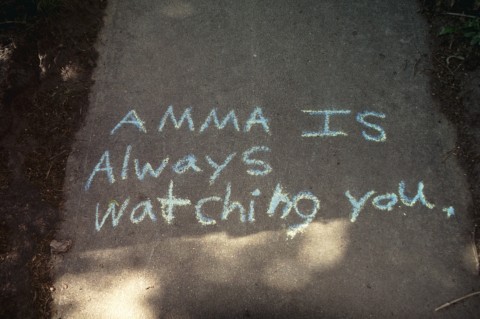 This card warns about the human tendency to give power away to a guru, political leader, celebrity, or a person who is the object of romantic idealization. Power may also be given away to an idea, an ideology, a fundamentalism (religious or secular), a movement, an addiction, an exciting, dangerous activity and so forth. There are myriad things that people give their power away to.

This chalk graffiti was found on a sidewalk in Boulder. Amma is a guru whose is promoted as a kind of god by her followers and in her own literature. She treats those close to her with sadistic despotism, supposedly to help break their egos.

The graffiti writer obviously has a guru complex always watching, but they externalized their neurotic disempowerment into a need to tell the world that their guru is omniscient and has taken the place of a supervisory Old Testament God. As Jung pointed out, proselytizing usually indicates an unbalanced psyche who has a compulsive need to spread the psychic contagion. You automatically disempower yourself when you inflate another person into a God and this can happen with romantic infatuation, guru worship, fundamentalist mythologizing and other relationships that have an unhealthy asymmetry of power.

In a very interesting issue of What is Enlightenment magazine (which is itself largely the product of abusive guru Andrew Cohen) entitled “What is Ego?” every psychologist and spiritual teacher included had some fascinating insight into the nature of ego, except Amma. Repeatedly she insisted on the need to submit to a guru (especially herself) to break the ego, and asserted that her often sadistic treatment of disciples was in service of this. But when the interviewer asked why she never had a guru, Amma (who refers to herself in the third person as rock diva Madonna is fond of doing) replies, “Amma considers the whole of creation to be her guru.” In other words, her supposedly nonexistent ego is actually so inflated that only the whole of creation is big enough to be her guru. If Amma invited others to have the whole of creation as their guru she would be a Taoist, and I would have no problem with her, but when a guru (or other power tripper) places themselves in a hierarchical position that is permanently higher than what any follower can obtain, you know that you are in the presence of cult pathology.

What is the motive that causes so many people to give their power away to a force that wants to dominate them? I speculate about that in my essay on the financial meltdown Foxes and Reptiles — Psychopathy and the Financial Meltdown of 2008-9,

“I have a theory of the often astonishing appeal of psychopaths, cult leaders, super salesmen and demagogues of various sorts that uses magnetism as analog. Most people are highly fragmented and oppressed by what psychologists call “psychic entropy” — the anxious tape loops and other distracted thoughts and fantasies that crowd their attentional space. When a person of single-minded focus and confidence appears it is analogous to placing a powerful magnet below a sheet of paper on which there is a scattering of iron filings. The magnet immediately organizes the scattered filings into a coherent pattern that reflects its magnetic field. The scattered personality feels an immense relief to be structured in this way from the outside and craves further contact and submission to the magnetic personality that can produce this effect which relieves them of their default state of psychic entropy.”

People may be similarly motivated when they give their power away to a fundamentalist religion, a new diet or financial scheme, a motivational speaker and many other forces and persons. They want something that will structure them from the outside in.

To whom or to what do you give away your power? Consider this is a propitious time to reclaim it. You need to always be watching you.

More on giving away your power to others and how to reclaim it:

How reclaiming power relates to our place in the great cycle shifts of the species:

The Mutant versus the Machine…