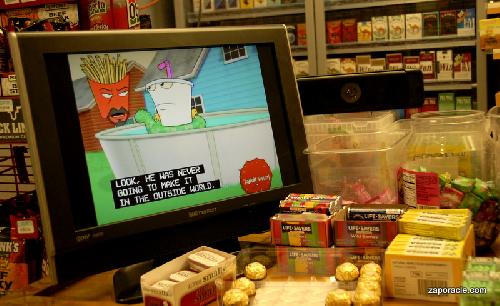 Card #554 – Defying the Dragons of Doubt

The day before I wrote this card I had many difficult struggles with doubt. Much of the doubt was in the context of a close relationship. A friend was struggling with doubts about the value of life and even talked about suicide. While I tried to counsel him, and point out aspects of the glass that were at least half full in his life and in mine, he lashed out at points of vulnerability in me, aspects of my life where I am most likely to have doubts and insecurities. The doubts that he directed at me had the sharpness that can only come from someone who knows you well and who can, for example, quote private doubts expressed in confidence to them by other people you care about. At times the onslaught of negativity had me on the ropes, and raised Dragons of Doubt in me. But I also realized that I was counseling a soul in torment and I worked to regain my center, to stay calm and not take the remarks personally, and to be a compassionate presence as my friend struggled with his doubts and inner demons. As I regained my center, the doubts were directed less at me and more at life in general, and he became quieter, still angry and defiant of the cosmos, but not quite as tormented. When he left my house it was close to midnight. But even after he was gone, the sulfurous atmosphere of doubt we’d wrestled with lingered, and I doubted if I had done any good, and if it was worth it for me to have attempted to help. I had wanted to get to bed by 10:30 PM. I had been trying for several days to get back on my four o’clock in the morning writing schedule, but had not been able to get up before seven. The morning after our conversation, the morning I am writing this, I woke up without an alarm clock at 3:54 AM feeling ready to get to work. A voice inside of me that arose spontaneously from the twilight boundary between sleep and waking said, “A gift from the gods.” The gift was the enthusiasm for creative work that energized me after only four hours of sleep. Earlier this week I learned that the Greek derivation of the word “enthusiasm” means “a god within.”

Enthusiasm is one of the great antidotes for the corrosive power of doubt. If you have access to enthusiasm, access to your True Will, to your essential mission in life, then you have the angels at your side that are needed to do battle with the Dragons of Doubt. And if you can win the inner battle with doubt you can be an ally to others who are struggling with doubts. When people cast doubts at you, when they doubt that you will be able to follow your path, it is often their own doubts that they are externalizing and projecting onto you. Defy the voices of negativity within and without by following your path. If you want to help the world, follow your path and defy the Dragons of Doubt.

For those willing to read more on this subject, I describe many battles with inner and outer voices of doubt in my most autobiographical essay: The Path of the Numinous — Living and Working with the Creative Muse

In this essay I recount a moment when forces from the spiritual realm seemed to help me through a difficult decision where I needed to defy some fierce Dragons of Doubt:

On June 17 of 1995 I went on the road, officially taking an approved year’s leave of absence from teaching. The decision wasn’t irreversible at that point; I still had about ten months to decide if I was coming back. Despite all the messages from the muse, this was no easy decision, as I had a tenured teaching job in the highest-paying county for teachers in the United States, where I made close to 60K a year (quite a lot for a relatively young school teacher in 1995) and was provided with health insurance, an excellent pension plan, etc. My parents, and every voice of middle-class common sense and practicality, were urging me to return to the economic security of a profession I once loved.

I had been on the road ten months when the school district called, pressing me for a decision. I was traveling with some young friends with whom I had done volunteer work at a Navajo reservation near Big Mountain, Arizona. The little bit of money I had from cashing out my retirement fund had long since been exhausted, and I had been living close to the edge. We were camped out in a mesa near Sedona, Arizona, and the morning had arrived in which the decision had to be made. With my friend Jordie as a witness, I did an I Ching reading that seemed to strongly support leaving the teaching job. As I was finishing the reading, another member of the group I was traveling with, Seth, who knew nothing about the decision I was facing, came over to show me a Jung quote he had just encountered in a book on mountain climbing. The quote turned out to be stunningly relevant. This was the second time in my life when it felt like Jung had stepped forward as a spiritual grandfather to give me his blessing. Here is what Seth read to me:

The fact that many a man going his own way ends in ruin means nothing, he must obey his own law as if it were a daemon whispering to him of new and wonderful paths. There are not a few who are called awake by the summons of the voice where upon they are at once set apart from the others, feeling themselves confronted with a problem about which the others know nothing. In most cases it is impossible to explain to the others what has happened, any understanding is walled off by impenetrable prejudices. ‘You are no different from anybody else,’ they will chorus. There is no such thing, or if there is such a thing it is immediately branded as morbid. He is at once set apart, isolated as he has resolved to obey the law that commands him from within. ‘His own law,’ everybody will say, but he knows better, it is the law.

The only meaningful life is the life that strives for the individual realization, absolute and unconditional, of its own particular plan. To the extent that a man is untrue to the law of his being, he has failed to realize his life’s meaning. The undiscovered being within us is a living part of the psyche. Classical Chinese philosophy names the interior way Tao, and likened it to a flow of water that moves irresistibly towards its goal. To rest in Tao means fulfillment, wholeness, one’s destination reached, one’s mission done, the beginning, end in perfect realization, the meaning of existence unique in all things. — C.G. Jung