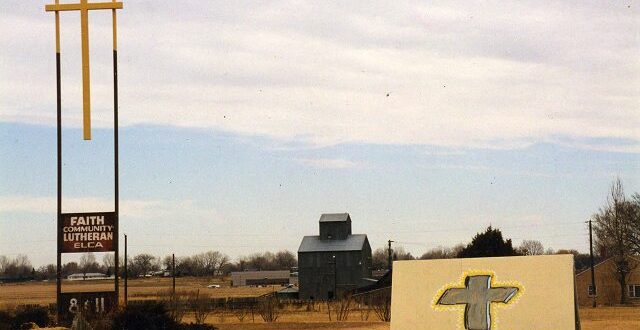 Found this sign in front of a Colorado Church CARD URL: http://www.zaporacle.com/card/beware-the-militaryindustrialfundamentalist-religion-complex/

Beware the Military/Industrial/Fundamentalist Religion Complex. If you put your faith in patriarchal systems, your spirit may sink like a rock in polluted waters.

Obviously, if you are using an oracle like this, you probably don’t have much faith in such systems anyway. But the danger they can generate still surrounds us. As Yeats wrote in his poem “The Second Coming,”

“The best lack all conviction, while the worst/

Are full of passionate intensity.”

If you are not part of the patriarchal complex then you need to have some passionate intensity to offset its machinations. Stay informed and find the area where you can most effectively oppose oppressive power systems. Sometimes the best opposition is indirect. The I Ching counsels that you only sharpen the fangs of evil when you resist it, and that the best rebellion from darkness is to make energetic progress toward the good. While I think that’s often the best strategy, as a dynamic paradoxicalist (see Dynamic Paradoxicalism — the Anti-Ism Ism) I am against absolutist positions, and think some virulent cases of evil — the Nazis come to mind — do require direct opposition.

“History is a nightmare from which I am trying to awake.” said Stephen Dedalus (James Joyce’s literary alter ego). Although we are presently incarnated within the Babylon Matrix, the approximately six-thousand-year period characterized by patriarchal, dominator societies (See social historian Riane Eisler’s seminal work: The Chalice and the Blade ), we may also be on the cusp of a new aeon when the age of nightmare empires metamorphoses into something new (see: The Mutant versus the Machine…).