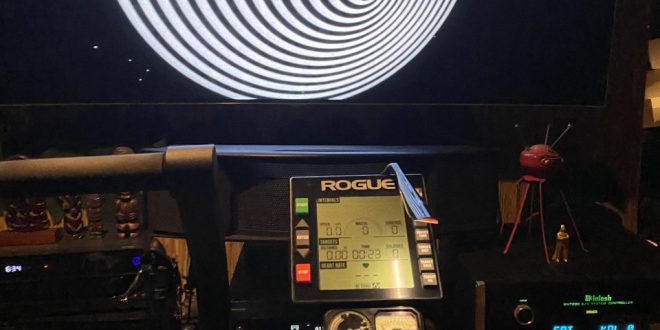 Photo caption: The Aerodyne Circumnavigator Mark VI resting in standby mode before the viewscreen of its Tikkiverse mobility platform.

Dateline: At 12:01 AM MST, 2.14.2020, Jonathan Zap began his journey to virtually circumnavigate the globe equatorially by air bike and mountain bike.

To stay on-track, the Aerodyne Circumnavigator Mark VI®™will have to precisely navigate a virtual equatorial trajectory as being off by even a single degree would necessitate course-corrections that would likely add hundreds of miles to the 24,898-mile journey.

No GPS-tracking will be used, only analog navigational instruments and dead-reckoning applied to point-to-point navigation to stay on course. Since neither stars, nor moon, nor sun are visible in the basement Tikkiverse mobility platform, the Aerodyne Circumnavigator Mark VI®™relies on a military-grade, analog, magnetic compass and 1940’s-era selenium photo-voltaic light meters to measure minute differentials of incident light polarization to maintain virtual equatorial orientation.

While the position of the Aerodyne Circumnavigator Mark VI®™looks stable and even unmoving (geo-synchronous relative to ground orientation) from the perspective of an observer standing in Zap’s Tikki-styled basement in Boulder, Colorado, this is, of course, an illusion.

The circumference (distance around the largest part of the Earth) is roughly 24,898 miles (40,070 kilometers), according to NASA. (This area is also called the equator.) If you estimate that a day is 24 hours long, you divide the circumference by the length of the day. This produces a speed at the equator of about 1,037 mph (1,670 km/h).

The sun has an orbit of its own in the Milky Way. The sun is about 25,000 light-years from the center of the galaxy, and the Milky Way is at least 100,000 light-years across. We are thought to be about halfway out from the center, according to Stanford University. The sun and the solar system appear to be moving at 200 kilometers per second, or at an average speed of 448,000 mph (720,000 km/h).

The Milky Way, too, moves in space relative to other galaxies. In about 4 billion years, the Milky Way will collide with its nearest neighbor, the Andromeda Galaxy. The two are rushing toward each other at about 70 miles per second (112 km per second).

Amidst this maelstrom of cosmic speeds and trajectories, the Aerodyne Circumnavigator Mark VI®™ must stay precisely-oriented to the earth’s equator to stay on virtual track and this requires split-second, minute course corrections and vectoring happening at speeds not visible to the naked eye. Vectoring is done by aligning to torsion energy accessed within rotating fields of space-time penetrating nuclear-magnetic resonance generated by the Aerodyne Circumnavigator Mark VI’s  triaxial warp core.

The Aerodyne Circumnavigator Mark VI®™’s Triaxial warp core is used only to maintain equatorial orientation, while all the locomotive force of the 24,898 mile trajectory must be supplied by sixty-two-year-old Jonathan Zap on a daily basis.

Veeder-Root, mile-count odometers on the Mark VI, on the dry-erase board in the kitchen of the SES (Stonewall Elf Stronghold) and in Zap’s study track daily progress.

As with any such heroic journey of exploration into the unknown, no pioneering adventurer can be sure of a successful outcome. To be a renegade rouge explorer at this level means humbly and stoically accepting the high degree of risk and danger that comes with boldly pushing the edge of the envelope and crossing the event horizon into the unknown, relying only on daring, courage and far-seeing vision to reach toward the stars and other worlds than these.

On such an unprecedented voyage of discovery, it is the journey itself that is the destination .  . .

The journey began at the Prime Meridian, zero degrees longitude

A degree of longitude is widest at the equator with a distance of 69.16111 miles using 24,898 miles as the circumference. I started at the Prime Meridian, or zero degrees longitude, but opposite Greenwich, England which put me in the South Atlantic going East about 690 miles off the coast of the Congo. 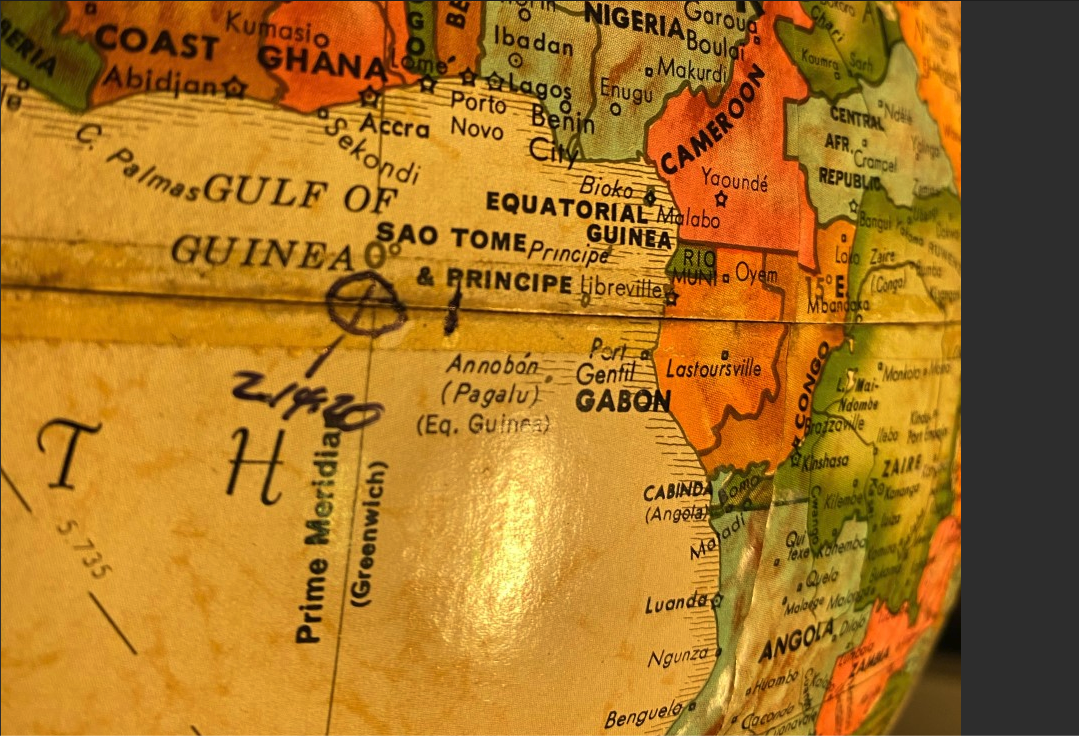