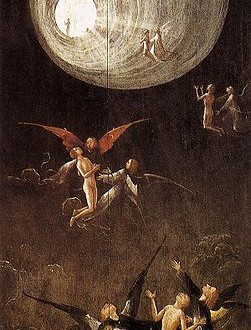 She hadn’t left the apartment since getting the terrible message, the omen of blackness which everyone called the ‘lab results.’ Was she an experimental rat to live and die by ‘lab results’ ? The message had come three days ago and she had barely gotten out of bed. A biological clock was ticking in her, but so different from the ticking of the fertility clock which had preoccupied so much of her late thirties and had finally run out when she turned 47, just two years ago. This was not a clock you could run out, as her career had ultimately run out her fertility clock.

Running, running out the clock, her ambition had always kept her going, something always seemed just ahead of her, but this clock was metastasizing, it could not be run out, and now all those bright lights that always seemed just ahead of her, all those hopes and dreams scintillating and iridescent in the horizon of her future, now what were they? A vast, pathetic carnival, a fool’s pageant tricked out in designer clothing.

Three days in bed, she who had always tried to use her time so efficiently. Fastidiously she had printed her schedule with a Monte Blanc pen in her burgundy Ostrich bound Day Runner. Day Runner, that was how should thought of herself, always the Day Runner, always running to keep up, and then trying to run still harder to try to get ahead, get ahead, but never quite getting there, almost getting there at moments, almost pulling up to the top people, but then there were always the set backs, the falling behind again, falling behind again to run with the hungry pack, the still ambitious forty somethings who had never gotten to where they hopped to be by thirty but were still nipping at the heels of those ahead.

If they took off her breast they might be able to stop the metastasizing clock, or at least slow its ticking. But what would that life be, would she be an ambitious amputee? Would she go through life with a gaunt, anorexic determination? Would she be a Nancy Reagan looking like Edward Munch’s The Scream in a Christian Dior dress?

This was a set back with no golden parachute, no severance package. Her only escape clause the fifty-three seconals in the generic bottle of amber colored plastic.

She floated near the ceiling for a while and then she came, she whose love was crowned in glory and radiant in robes of gold and shamrock. She held her like a precious baby, calming her sorrow, comforting her. Before they left the old place forever, she had her look back for long moments of self reflection, deep beyond time, moments when she looked down at the body lying in the rumpled bed, how it had all ended, and all that led up to that moment, the gusted grief of her life, the showless tantrum of her ambitions, and the sorrow, sorrow, sorrow. A woman’s face of sorrow. An omen of blackness clinging to a woman’s face of sorrow. Always she had been searching for something, searching with panic and sorrow, searching in lovers, losing herself in depths of pleasure, but always forced back to the surface, the ocean of painful disillusionments. Always searching for something, searching everywhere for it, but all the time it had been in her, all the time inside of her, why had she bothered to search for treasure glittering inside of another when all the time it had been in her? She saw her life falling away below her, a twisted leaf falling slowly, a twisted leaf, brown and dusted with yellow-orange, a twisted leaf falling slowly.

—Inspired by the song, “Twisted Leaf” by Sierra Samuel