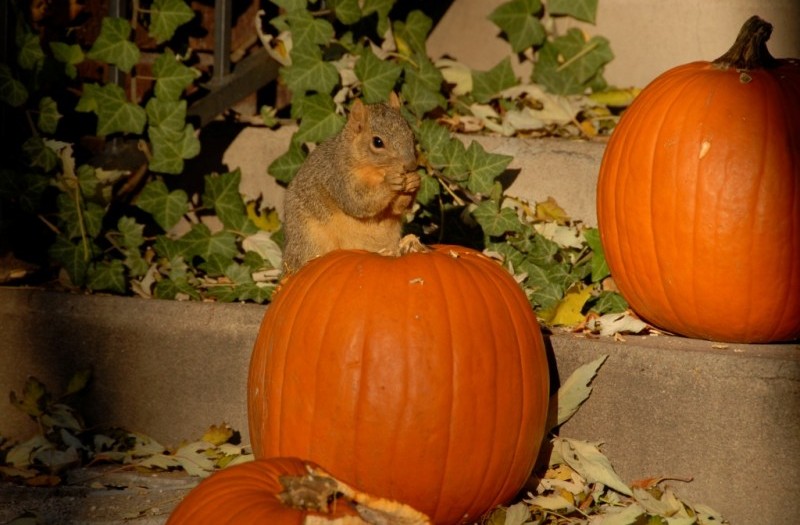 Resources do matter, but they have always fluctuated, and that fluctuation occurs with need as well as want resources. A good strategy is to learn how to thrive, or at least work with, the resources currently available.

That’s the two-sentence version, which may or may not be a sufficient resource. For those willing to read more, here’s the rest:

Life rarely gives you everything you want. For all we know, this squirrel may be fantasizing about walnuts and silently cursing the universe for giving it leftover Halloween pumpkins instead. But as far as I could tell, when I photographed this squirrel on a residential street in Denver, the squirrel seems to be thriving on what it’s got. An outside point of view is that it seems to be plump and healthy with a good chance of getting through winter.

But additional resources can sometimes be just the thing; resources do matter. The squirrel would probably be much better off in a more animal-social-service-intensive universe where, for example, a squirrel catering service dropped off a raw nut buffet a couple of times a week. One imagines that the squirrel, however, is not holding its breath for the buffet. My anthropomorphic impression of this squirrel was that it was pretty happily feasting on the currently available resource — left over Halloween pumpkins. Of course, no discerning squirrel is going to mistake the raw, wet cellulose taste of pumpkin with the oily, nutty, high-Omega-3 richness of a good walnut. But whatever a pumpkin loses to a walnut in taste and nutrition, it more than makes up for in size. And when you are trying to build body fat to get through the winter, size does matter. In general, resources matter. This is a classic paradox where each pole of the paradox (resources matter/inner self-sufficiency trumps circumstance) is in some cases more true than the other pole. My point of view is that most important truths exist as a double-poled paradox, opposite positions are possible and each pole is more valid in some circumstances, and less so in others. (See my philosophy: Dynamic Paradoxicalism — the anti ism, ism.)

Don’t get me wrong, I like cosmic overviews as much as the next guy, but as a Dynamic Paradoxicalist, I also realize that transcendence includes that which is transcended. This inclusion means that even with the cosmic overview, I’m still going to spend time on the poles.

So in the present case of resources, the cosmic overview is the Taoist assumption that the universe is unfolding as it should, that resources, like everything, fluctuate, and that fluctuation is the heartbeat of life, an essential part of the dynamic aliveness and interest of incarnation, and it takes times of both abundance and scarcity, along with every other sort of fluctuation, for there to be development. People who have lived through scarcities sometimes develop strong characters as a result. Other times people die of a scarcity, or survive it only to become obsessive and neurotic about resources during abundant times. So as much as we could glamorize and inflate self-sufficiency, it’s a pole that works well if you are, for example, a well-fed American tempted to acquire luxuries via credit card debt; it is not such an attractive pole, however, if you are watching your children starve, and the only self-sufficiency available is a detached acceptance of whatever comes.

From the point of view of my present economic status where I always manage to keep myself in groceries and have a certain amount of what’s called “leisure time,” an important resource distinction is the quality of the audio/visual equipment I possess. For example, movies, which I increasingly watch at home, are a priceless resource, one of my most important cultural experiences. Movies are still the queen of the arts, an art form that incorporates all other art forms. Movies operate like a mass dream delivery technology. When movies are done right they can create encompassing, life-changing experiences, participation mystique with parallel realities. When it comes to the projection or video screen on which you experience the movie, size does matter—that’s why people pay to go to the movie theater. It is far better to see a powerful, visionary movie in high resolution on a big screen then on a small, poor-quality one. But if I were starving, screen size would probably diminish somewhat in importance. In other words, resource point of view fluctuates with resources.

Resources do matter, and on all sorts of scales. The hierarchy of survival needs like air/water/food/shelter obviously matters, but there is also a meaningful hierarchy of gadgets, the power objects of technological magic, those lesser rings of power. For example, there is a huge resource distinction between a computer that can access the internet and one that can’t, or no computer at all. No computer/computer/computer plus internet is a very meaningful resource hierarchy. We tend to take some of this for granted. Most of us now have access to hundreds of thousands of movies. But a hundred twenty years ago in 1887, whether you were king or robber baron, you had access to exactly zero movies. And anyone with access to an online computer possesses a portal to a once unimaginable abundance of information, cultural, and (however truncated) social experiences.

Yeah, I know that I’m supposed to be wringing my hands about the shadowy, fractured world of internet socializing and lamenting it as a cheap substitute for what internet critics call “live contact,” those unsanitary face-to-face 3D encounters that were favored in yesteryear. Not too long ago were the good ol’ days when everything was done up in wholesome country style, and there were amber waves of grain and women in gingham dresses and all that. But those were also the days when your nearest neighbor might have been a three-mile walk in the snow from your house. And although the nearest neighbor might be the Waltons family, who were just hoping you’d drop by for a spell to eat a lavish Thanksgiving dinner, it is just as likely that the next little house on the prairie might contain a guy who drinks too much moonshine and would like to beat a wife if he could get one. Since he lacks such in-house entertainment, his strongest drunken perception is that your fences encroach on his land and amongst his limited repertoire of social skills, and the communication tool of choice, the one best able to represent his linguistic and social intentionality (in a world deprived of web 2.0 social-networking) is very likely a shotgun. But the next social option in the rural version of Facebook might very well be another little house on the prairie that is an additional three miles down the snow-covered road.

When I grew up in the Bronx, back in the day, there were the kids on my block, and the opportunity, off-block, to get beaten up by children of all races and creeds and colors. Video was a one-way sort of thing. Even in New York City there were only seven channels, and there was no interacting with what appeared on the screen except changing between those seven channels. Twas the night before Internet, when all through the house, not an input device was stirring, not even a mouse. But now I live on Planet Boulder, and besides local friends, I can also have webcam conversations with fellow mutants who live thousands of miles away. It may take a whole village to raise a child, but it may take a whole technological magic enabled civilization to raise a certain type of mutant.

The presence and absence of resources has shaped me in all sorts of ways. I am largely the mutant product of a whole technological magic enabled civilization, while my grandfather grew up in a Latvian village where there was no electricity or indoor plumbing, and therefore was a different sort of mutant. When my father was born, there were no commercial radio stations anywhere on the planet (though now he too surfs the internet). When I was born, Sputnik had just been launched. Walking on the moon was only twelve years away and I never lacked for food, plumbing or television. A boy who is twelve now, however, has never had to endure the darkness of a world without internet, but has also spent nearly two thirds of his life with George W. Bush as president. So there are always tradeoffs, the fluctuation of resources, the fluctuations of the matrix. Sometimes you need to focus on resource acquisition, but even while you are doing that, it is usually a good strategy to focus on thriving with the resources currently available. So if life gives you leftover Halloween pumpkins, then make pumpkin-flavored lemonade or write a book about how much weight you lost on a raw pumpkin diet. Properly advertised, everyone will eventually want pumpkin-chai flavored energy drinks, or something like that, and with sufficient marketing skills, to paraphrase the ancient Chinese, every crisis is also some sort of retail marketing opportunity.

They say that stress is the difference between what you want and what you’ve got, and sometimes its better to get what you want, and other times to want what you’ve got. Wanting what you got always works well as an aphorism, but unless you are a world class Taoist master, there are going to be times where wanting what you’ve got just doesn’t cut it. I think that a useful aphorism for the leisure class, like, “It’s not about getting what you want, it’s about wanting what you got” might not, however, be just the thing to buck up a baby dying of AIDS or someone on a cattle train to Auschwitz. In my present circumstance where I have a weatherproof room filled with groceries and gadgets, wanting what I’ve got is a lot more viable. And in any situation where continuing to live is better than dying, there is one strategy that works if you are plant, animal or person, a strategy that will work equally well if you are a transhumanist cyborg with a titanium alloy exoskeleton, a demigod, or a walnut-deprived squirrel:

Be willing to work with what you’ve got.
See also:
Imagine Getting More
Green Energy Vortex
Kill the Time Grid