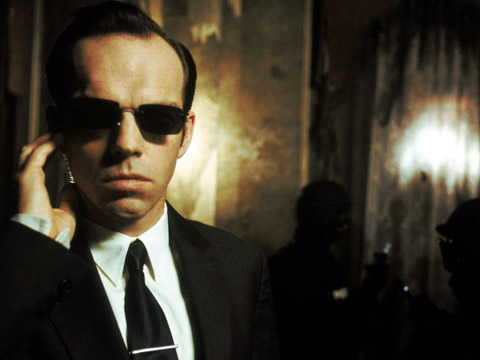 I can’t quite put my finger on it, but in my heart I know that the Bush administration must in some way be responsible for how bad the new Matrix movie is. I feel forced to review this abomination because I’ve said so many good things about the original Matrix which managed to say almost everything while Matrix Regurgitated took 4 years and 110 million dollars to say less than nothing. Much less than nothing for the mediocrity matrix that spawned it seems to metastasize backward in time to seriously degrade the first movie. It was as if it had just been discovered that Leonardo DaVinci had painted a second portrait of Mona Lisa which depicts her playing the slots in Atlantic City with pink plastic rollers in her hair.

It’s too late for me to repair the damage done to my appreciation of the first Matrix by this sequel. My hope is that some fortunate person who has not seen the Matrix Regurgitated will read this and spared the painful disillusionment of a vision turned into a Matrix fashion show mixed with product placements for Cadillac (yes, Cadillac—that paragon symbol of freedom from the Matrix).

As I was leaving the mall which contained the multiplex which contained Matrix Regurgitated I was in an elevator with four twenty somethings looking incredibly bored. One of them listed a whole series of boring sounding things he had done the day before and concluded the recitation by saying, “It was really boring.” His friend asked him rhetorically: “Was it as boring as the new Matrix?”

The Animatrix is the real continuation of the Matrix mythology, not the godawful Matrix Regurgitated, the 110 million dollar abortion that in some sinister paradox seems to show the power of the Matrix in its equal and opposite stupidity as compared to the incisive vision of the first. It seems like the Matrix recognized the first movie as a dangerous breech of the collective inner eye and, in a virulent immunological counterattack, created a second movie directed by Agents to attack the human spirit with its colossal mediocrity.

The Animatrix must be seen. Those of you read my “Shocking Anomalous Experience” emails will see that the creators of the Animatrix had a specific identical vision to something I wrote about two years ago—the parasitic lattice with its suctioning dendrites of evil.

Speaking of a parasitic lattice with suctioning dendrites of evil, what follows is Dubya’s resume which someone sent to me recently.

(P.S.—Autofocus, just out in video/DVD is a great film with much to say about the corrupted eros of our time and the many corruptions of the celebrity parade. Chicago, a brilliantly edited movie, has some things to say on the same themes.)