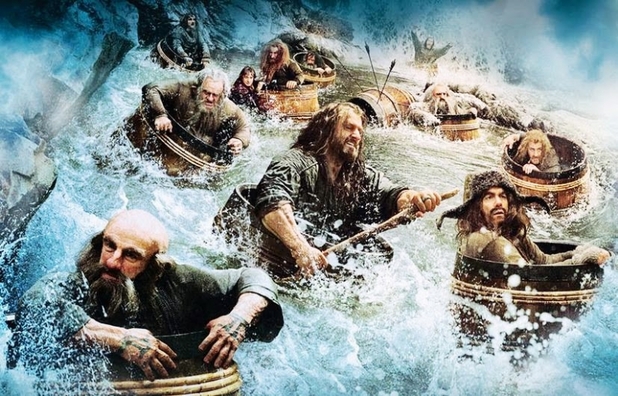 An Unexpected, High-Frame-Rate Journey into the Jacksonian Tolkienverse (a review of Hobbit 2)

December 17, 2013 Reviews Comments Off on An Unexpected, High-Frame-Rate Journey into the Jacksonian Tolkienverse (a review of Hobbit 2) 2,694 Views

I might still be a bit too disoriented, even the next day, to give a thorough review of this grotesque, spectacular trip into Peter Jackson’s version of the Tolkienverse. I think at this point, we should refer to the new Jackson movies as trips into a Jackosonian Tolkienverse rather than as “The Hobbit” which was a relatively simple, well-mannered tale written for children. We’re about as far from the Hobbit book now as wrecking-ball-era Miley Cyrus is from her Hannah Montana persona.

The first film felt more anchored in the original with the unexpected party at Bilbo’s house and many familiar elements from the book. In the second film, however, the anchor seems to have been pulled up and we are set adrift into turbulent, high-frame-rate waters, an unstable ocean of Tolkien memes, themes and icons. The result is a fascinating, grotesque, and disorienting hyper-Tolkien medley, rather than any particular story Tolkien ever wrote. Some have referred to the second film as more like fan fiction than even a loose interpretation of the original.

We got to the theater late, in the middle of the last trailer. The seats we found were just a couple of rows back from the gargantuan screen. Once the movie started, the high frame rate plus 3D IMAX was a neurological hammer blow. I felt like I had been neurally interfaced with a fifteen year old who, following an all-night session playing LOR video games on magic mushrooms, Adderall and ultra-sour candy, had collapsed onto his bed, the room spinning around him as a grotesque and surrealized version of the Tolkienverse, augmented by adolescent testosterone, played out as a high definition fever dream. I felt myself the helpless captive of this neural interface, tumbling, like a dwarf riding a barrel down a waterfall, into the white waters of a chaotic Tolkienverse as conjured by the unstable brain chemistry of an adolescent psychonaut/LOR video gamer.

While that sounds grotesque and vertigo-inducing, and it certainly was, if given the chance to neurally interface with an hallucinating, Tolkien-infused fifteen year old for a couple of hours, I’d like think that even in middle-age I’m enough of a psychonaut that I’d be willing to take such an unexpected journey for the sheer novelty of it. Obviously, it’s not something I would want to do every day. It’s kind of like the unexpected opportunity to go bungee jumping in the middle of a thunderstorm with strobe lights flashing all around you. The metaphorical bungee jump would be a twice in a life time experience (thrice in a life if you count Hobbit pt. 3 coming in December of 2014) and furthermore, the novel experience could be had for just eighteen dollars at a local multiplex and would never involve any actual physical danger. I would do it. I did do it. I would even do it again. It’s not something I would want to do every day, but it was certainly bizarre and exciting.

In the interests of full disclosure, and maybe I should have admitted this up front, where I live in Colorado there are certain 3D IMAX enhancing refreshments that one can imbibe with more legality and convenience than in many other states. My pre-IMAX refreshment came in an edible form that allowed me to miscalculate the dose that proved to be four times stronger than I anticipated. The quasi-legal refreshment combined with high-frame-rate 3D IMAX rubbed my face, for example, into every pore and canker sore of hideous Orc corporeality. There were time-dilated moments when I stared into Orc eyes that were clouded with cataracts, but glowed from within with rabid hunger to dine on man flesh tonight, and that sort of thing.

When I staggered out of the theater with my two companions (the other members of the small IMAX fellowship who had taken much milder doses of the same refreshment), I noticed that we all seemed a bit beat up and disoriented as if he were emerging from goblin tunnels after missing both lunch and second breakfast. I was relieved, however, to find that my two companions, physically fit guys in their early twenties, felt just as neurologically challenged and exhausted by the high-frame-rate grotesqueries as I did.

As we drove back to Boulder (expertly driven by a young, native Boulderite member of the fellowship, his motor skills unfazed by the experience), my head felt like it had been banged up by a thousand pound disco ball, each of the mirrored tiles flashing 48 times a second, while a sequined, self-transforming machine elf version of Miley Cyrus squirmed on top of it.

Once my thoughts cleared a bit, I was able to articulate a few things I didn’t like about the film. Coming in the middle of a story that had now become untethered from the original, a lot of the narrative drive was gone. The end was not so much a cliffhanger as a discontinuity, a disorienting interruption of a disorienting experience. Also, there were many ways that the prequel aspect added to the cognitive dissonance. Despite CGI airbrushing, both Gandalf and Legolas looked older, not younger as chronology would lead one to expect.

Also, I wanted more shamanic elf culture, but the woodland elves are more like the inner city gangsta version of the Rivendell and Lothlorien elves. They didn’t seem mystical at all, they were too busy doing Elf/ninja moves taking down two or three orcs every second, etc. The one ring’s power had yet to be realized, so even it seemed oddly diminished. The visions of Sauron as a necromancer whose power was still coalescing, however, were absolutely brilliant.

So, I’m left with these mixed impressions. It was well worth a Sunday afternoon to be taken on this staggering and unexpected trip. On the other hand, I feel like my solid grounding in the Tolkienverse, solidified by multiple readings of the books, and multiple viewings of the LOR movies, has been shaken and perhaps cheapened. The Jacksonian Tolkienverse is not as wholesome and coherent a place as Tolkien’s Tolkienverse.

For example, there was a rather tasteless Jacksonian attempt to sex up the famously sexless Tolkienverse. Jackson invented a she-elf, Tauriel (played by Canadian actress Evangeline Lilly known for her role in the TV series, Lost). Tauriel flirts with the dwarf Kili (played by Aidan Turner) whom she has taken prisoner. Jacksonian dwarves seem to divide sharply into two sub-species—-large nosed, mesomorphic, almost cartoonish dwarves, and those that look like handsome guys in stylish Middle Earth attire. Kili is from the handsome guy subspecies.

“Aren’t you going to search me?” Kili asks Tauriel. “I could have anything down my trousers.”

“Or nothing” she replies.

As I reflected on this scene, I realized that the aspersion of uncertainty and insubstantiality this haughty she-elf had cast about what Kili had between his legs corresponded to what I felt about what the movie had left between my ears. My synapses were exhausted, neurotransmitters levels had been depleted, but a spiraling vortex of grotesque visions still swirled in my mind, and I knew that sooner or later I would allow myself to be sucked back into the Jacksonian Tolkienverse seeking for some precious thing that had slipped from my fingers and into the Cracks of Doom…

my review of part one, my writings on the Tolkien Mythos 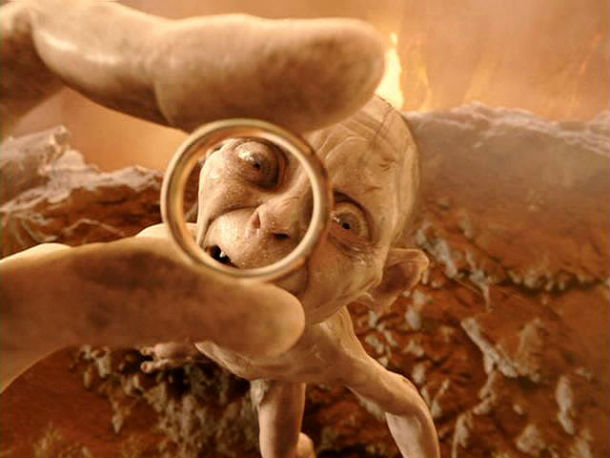