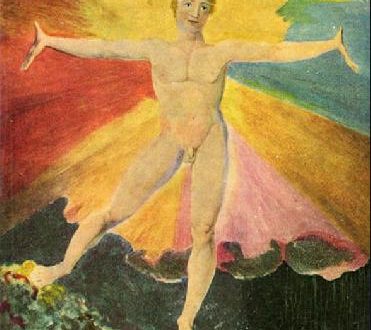 Glad Day by William Blake 1757-1827 This image is used in several other cards. Card URL: http://www.zaporacle.com/card/you-are-light-sheathed-in-flesh/

We are creatures of light sheathed in flesh. With some people, however, the light shines through much more visibly, while others seem more a topography of skin, hair and clothing relieved only by an anxious sliver of light coming from eyes that seem nearly buried by unhappy flesh.

The people who seem to have a light shining through them as if they were stained glass windows are likely to have some of the following: they are physically beautiful, have youthful vitality, have a mystic, spiritual and/or parapsychological radiance. A hug from such a person feels like an embrace from glowing light loosely sheathed in flesh. To me the light seems like a warmly glowing filament of double helix DNA. Often there will be a moment of cognitive dissonance for the first split second of such a hug. Can such a divine radiance emanate from a mere mortal? I will feel the contrast between their waking personality whose shadow I am aware of, and the glow-gift, which feels as pure as sunlight. The embrace or glance of such a person can be like a tuning fork, our cells responding to the perfect pitch of their radiance awakening our own inner light. If we only perceive their light, and not our own, then we are imperiled. Infatuation, enslavement, or the leaden weight of inferior self-comparison oppresses us as we give our power over to our projection. Thoughtful reflection, however, should tell us that only a being of light could perceive the light essence of the other. When I perceive the light of the other without succumbing to projection then I am aware of my own stimulated inner light, which I sometimes experience as a vibrating, spiraling aurora borealis in my chest.

The more you are able to integrate the projection and deeply understand that the light which you perceive in the other is a flowering of the light at the essence of everything, the more you will be able to see the light even in those with grotesque human forms and those whose inner light is cocooned within a dense mass of psychological scar tissue. When you can perceive such hidden lights, you can then see the light shining through all living things and all “inanimate” things as well. Everything is made of light in this holographic matrix of ours. When we are depressed the hologram of light seems to become shrink-wrapped into an unpleasant topography of forms trampling into our perception. Lift up your downward gaze and behold the light within and without! To paraphrase a Sanskrit saying: The light is like a circle whose center of illumination is everywhere, and whose circumference of outer darkness is nowhere.